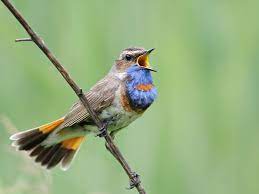 In our quest to find what makes humans unique, we often compare ourselves with our closest relatives: the great apes. But when it comes to understanding the quintessentially human capacity for language, scientists are finding that the most tantalising clues lay farther afield.

An explosion of research is finding that culture – once thought to be exclusive to humans – is widespread among animals and plays an important part in their social lives and survival. Birds offer some of the most interesting and surprising examples of animal culture.

Just as with human languages, songbirds have dialects that are learned and passed down through generations. Construction and use of tools by crows and problem solving by cockatoos also appear to be culturally learned and transmitted.

Human language is made possible by an impressive aptitude for vocal learning. Infants hear sounds and words, form memories of them, and later try to produce those sounds, improving as they grow up. Most animals cannot learn to imitate sounds at all. Though nonhuman primates can learn how to use innate vocalisations in new ways, they don’t show a similar ability to learn new calls.

Interestingly, a small number of more distant mammal species, including dolphins and bats, do have this capacity. But among the scattering of nonhuman vocal learners across the branches of the bush of life, the most impressive are birds — hands (wings?) down. Parrots, songbirds and hummingbirds all learn new vocalisations. The calls and songs of some species in these groups appear to have even more in common with human language, such as conveying information intentionally and using simple forms of some of the elements of human language such as phonology, semantics and syntax.

And the similarities run deeper, including analogous brain structures that are not shared by species without vocal learning.

These parallels have motivated an explosion of research in recent decades, says ethologist Julia Hyland Bruno of Columbia University, who studies social aspects of song learning in zebra finches. “Lots of people have made analogies between language and birdsong,” she says.

Hyland Bruno studies zebra finches because they are more social than most migratory birds – they like to travel in small bands that occasionally gather into larger groups. “I’m interested in how it is that they learn their culturally transmitted vocalisations in these groups,” says Hyland Bruno, co-author of a paper in the 2021 Annual Review of Linguistics comparing birdsong learning and culture with human language.

Both birdsong and language are passed culturally to later generations through vocal learning. Geographically distant populations of the same bird species can make small tweaks to their songs over time, eventually resulting in a new dialect – a process similar in some ways to how humans develop different accents, dialects and languages.

With all these similarities in mind, it’s reasonable to ask if birds themselves have language. It may come down to how you define it.

“I wouldn’t say they have language in the way linguistic experts define it,” says neuroscientist Erich Jarvis of the Rockefeller University in New York City, and a co-author of Hyland Bruno’s paper on birdsong and language. But for scientists like Jarvis who study the neurobiology of vocal communication in birds, “I would say they have a remnant or a rudimentary form of what we might call spoken language.

“It’s like the word ‘love.’ You ask lots of people what does it mean, and you’re going to get a lot of different meanings. Which means that it’s partly a mystery.”

There are multiple components to spoken language, Jarvis says, and some are shared by more species than others. A fairly common component is auditory learning, like a dog figuring out how to respond to the spoken command “sit.”

The vocal learning that humans and some birds do is one of the most specialized components, but all of them are shared to some degree by other animals, he says. One key element of human language is semantics, the connection of words with meanings. Scientists had long thought that unlike our words, animal vocalisations were involuntary, reflecting the emotional state of the animal without conveying any other information. But over the last four decades, numerous studies have shown that various animals have distinct calls with specific meanings.

Many bird species use different alarm calls for different predators. Japanese tits, which nest in tree cavities, have one call that causes their chicks to crouch down to avoid being pulled out of the nest by crows, and another call for tree snakes that sends the chicks jumping out of the nest entirely.

Siberian jays vary their calls depending on whether a predatory hawk is seen perching, looking for prey or actively attacking – and each call elicits a different response from other nearby jays. And black-capped chickadees change the number of “dees” in their characteristic call to indicate the relative size and threat of predators.

Two recent studies suggest that the order of some birds’ vocalisations may impact their meaning. Although the idea is still controversial, this could represent a rudimentary form of the rules governing the order and combination of words and elements in human language known as syntax, as illustrated by the classic “dog bites man” vs. “man bites dog” example.

In addition to alert calls, many bird species use recruitment calls that summon other members of their species. Both Japanese tits and southern pied babblers appear to combine alert calls with recruitment calls to create a sort of call to arms, gathering their compatriots into a mob to harass and chase off a predator. When the birds hear this call, they approach the caller while scanning for danger.

The order of combined calls matters to Japanese tits, which may mean they have a rudimentary form of the ordering rules of human language known as syntax.

Scientists led by ethologist Toshitaka Suzuki of Kyoto University discovered that the order of the combined calls matters to the Japanese tits. When Suzuki’s team played a recorded “alert+recruitment” combo to wild tits, it elicited a much stronger mobbing response than an artificially reversed “recruitment+alert” call. This could simply be explained by the birds responding to the combined alert+recruitment call as its own signal without recognising the parts of the combination, but the scientists came up with a clever way to test this question.

“These results demonstrate a new parallel between animal communication systems and human language,” Suzuki and colleagues wrote in Current Biology in 2017.

But it’s a matter of interpretation whether the call combinations of the tits and babblers is really relevant to discussions of human language, which involves more complex sequences, says behavioural neuroscientist Adam Fishbein of the University of California, San Diego.

“If they were doing something more like language, you would get a whole bunch of different combinations of things,” Fishbein says. “It’s such a restricted system within the birds.”

Fishbein’s own research with zebra finch song suggests that syntax may not be as important to birds as it is to humans. “I feel like people have been trying to impose this human way of thinking about communication on what the birds are doing,” he says.

Smartphone is your enemy No.1: How stepping back from connectivity restored Adam Weiss’s focus in the lab