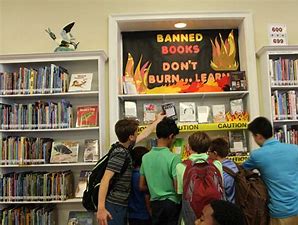 “​​You can learn about the plantation system, the horrors of slavery, the generational trauma, but you’re not going to get the full impact until you actually see it on an individual level, which (‘Beloved’) deals with very well,” Mackey said.

In the book, a family of formerly enslaved people is haunted by a baby who was killed by her mother so she wouldn’t be subjected to slavery.

Now, Mackey leads the Texas chapter of Voters of Tomorrow, a youth-led organization that engages members of Gen Z in politics. She plans to hand out copies of “Beloved” and “Maus,” a graphic novel about the Holocaust, at schools as part of a Voters of Tomorrow initiative in Texas and Virginia.

Trends in both states have epitomised the latest wave of book challenges.

“A growing number of parents of Texas students are becoming increasingly alarmed about some of the books and other content found in public school libraries that are extremely inappropriate in the public education system,” Abbott wrote in his letter.

Through records requests to nearly 100 school districts in metropolitan areas across Texas, a recent NBC investigation found hundreds of titles have been pulled for review. The outlet identified a huge uptick in the number of formal challenges filed by parents and community members – 75 in the first four months of the semester, compared with just one during the same period a year before.

A handful of the districts reported more challenges this year than in the past two decades combined.

And in Virginia, Republican Governor Glenn Youngkin, who took office last month, ran in part on the promise that he would give parents more of a say in their children’s education. One of his campaign ads last fall featured a mother who didn’t want her son to read “Beloved.”

“By banning Pulitzer Prize-winning books such as ‘Maus’ and ‘Beloved,’ school districts and states are depriving young people an equal and well-rounded education to their peers in states without these so-called ‘divisive issues’ bills,” said Sari Beth Rosenberg, a New York public school US history teacher and Voters of Tomorrow senior advisor, in a statement.

“They undermine young people’s ability to engage in meaningful and complex discussions about history and literature. Students deserve so much better.”

Studies show, for example, that hostile school climates are associated with higher rates of absenteeism and a greater likelihood of dropping out among LGBTQ+ youth. And efforts to remove books featuring LGBTQ+ characters from the campus library can easily make that school feel unwelcoming for a young queer person.

“Seeing a small army of people in your community railing against something that you’re already struggling with – that’s the kind of activity that contributes to higher rates of loneliness, isolation and poor mental health,” said Brian Wenke, executive director of It Gets Better. Those outcomes can even lead to homelessness.

Schools with LGBTQ+-inclusive curricula had lower rates of bullying, another study found. Other data show queer students at such schools have lower rates of suicide.

That’s in part because “books and stories, in general, have this ability to broaden your horizons – to help you understand experiences that aren’t yours,” Wenke said. The empathy they can foster helps create a school environment where queer youth feel they belong.

(It Gets Better will be distributing $500,000 total in grants to LGBTQ+ youth leaders across the country to develop programs that make school more inclusive, including by ensuring access to books.)

“We can’t ignore that the reason that a lot of these books started being included in school collections was to help fill a gap,” said the National Coalition Against Censorship’s Nora Pelizzari. Many of the titles being challenged, she stressed, feature stories about youth who feel marginalized from their communities.

And while the impacts of book challenges are hard to quantify, various students told USA Today the dots are easy to connect. Book banning “puts barriers around what you can learn” and perpetuates subjective notions of what’s “controversial,” Koung said.

“You’re not going to have a generation that is educated on these legacies of racism and sexism and fascism that these books deal with because that information simply wasn’t provided to them,” said Mackey, the Texas freshman.

And if nothing else, students say the challenges are counterproductive. Banning a book only makes it more tempting, after all. Sales for books such as “Maus” and “Beloved” have soared.

“Kids are going to find the chance to read” controversial books, said Kharia Pitts, 12, a middle schooler in Round Rock, Texas. “It doesn’t matter if they’re banned.”

Last September, Kharia and her friend Jaiden Johnson, also 12, started a virtual book club meant to serve as a safe space where Black children can read literature by and about Black people. Every month, Kharia and Jaiden assign members a new book – many of which are frequently banned – and come up with discussion questions that explore how the title’s themes relate to their own lives.

“It’s important to see ourselves in places where people that look like us are the heroes and not just the background characters,” Jaiden said.

Age should not be a barrier to pursuing a PhD: Nutritionist in Kenya shares advice for prospective students