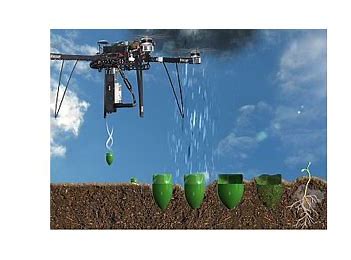 Last year’s Castle Fire in California’s Sierra Nevada is estimated to have killed more than 10 per cent of the world’s giant sequoias, the tallest trees on earth. Sequoias can live through many fires over life spans that last thousands of years; their bark is fire-resistant and they rely on fire to reproduce.

But as climate change intensifies, wildfires are growing larger and more intense. According to state officials, six of the seven largest wildfires in California history took place roughly within the past year.

To help restore fire-ravaged forests and temper the effects of climate change, a handful of young companies want to scatter seeds from drones. At least three – Dendra Systems, CO2 Revolution, and Flash Forest – have pledged to plant a billion trees or more.

But it’s not clear how effective drone-led reforestation can be. One study found that fewer than 20 per cent of seeds dropped by drone take root and grow into trees. None of the companies contacted by Wired would disclose how many trees they’ve successfully grown to date.

Now, there’s a new obstacle: a seed shortage that’s expected to last for years is prompting forestry officials to make the most of every seed they have.

After the Castle Fire, the California Department of Forestry and Fire Protection considered working with DroneSeed, a Seattle company that uses drones the size of washing machines to plant trees within six months of a fire, to help restore Mountain Home State Forest. But the plan was put on hold.

Chief Stewart McMorrow, supervisor of the Cal Fire Reforestation Center, which has run the state’s tree seed bank since the 1950s, says planting trees with drones may have merit. But he says it’s hard to test the idea when seeds are scarce, because so few of the drone-scattered seeds will turn into trees.

Planting trees from the sky is particularly attractive in areas that are hard for human crews to reach, and burned slopes are susceptible to erosion and mudslides. It has the potential to speed reforestation – one of humanity’s most effective weapons to combat climate change, according to the UN’s Intergovernmental Panel on Climate Change.

The US Forest Service predicts that replanting on federal lands alone could reduce the nation’s carbon footprint by 14 per cent. Globally, a group of scientists said in a 2019 paper that there was room on Earth to plant hundreds of billions of trees, which could reduce atmospheric carbon levels 25 per cent.

Whether drones can help depends on how many of the drone-dropped seeds take root and grow into trees, which can be affected by factors such as flight path, the distribution of seeds, the speed with which they hit the ground, and whether they get eaten by squirrels or other wildlife.

“I’m sure there’s lots of people that have big ideas for drones,” says Robert McNitt, creator of the Forest Seedling Network, which maps seeds to certain areas in Idaho, Oregon and Washington based on elevation and connects nurseries selling seedlings with small landowners.

McNitt started planting trees in the 1950s. In the 1960s, he did some aerial seeding in Oregon that he characterised as unsuccessful. “It takes a lot of other steps beyond the scattering of seed to grow a forest, in my mind,” he says.

Not every drone-fired seed must take root for the method to be successful. According to Canadian start-up Flash Forest, two drone pilots can scatter as many as 100,000 seeds a day. By comparison, a person working by hand can plant about 1,000 seedlings a day.

In a landmark study released this summer, researchers from more than a dozen government agencies, universities, and companies in seven countries conclude that drone seeding has the potential to restore forests and cool the planet, but low seed survival rates and other challenges stand in the way.

The researchers identified 10 tree-planting drone companies as well as university research in India and government reforestation efforts in New Zealand and Madagascar.

In Myanmar, Thailand, and the United Arab Emirates, drones have been used to help plant mangrove trees, a potentially impactful development, since trees planted near the equator capture more carbon than those planted elsewhere.

But the researchers said few companies have shared success rates or research into how seeds fare after they’re dropped by a drone. They called on those involved in drone seeding to be more open about their results. They label pledges to grow a billion trees a year “propaganda.”

Mikey Mohan is a PhD candidate at UC Berkeley and lead author of the paper. He thinks commitments to grow a billion trees are largely promotional tactics by companies looking to raise funds from investors. He said half of the social media posts he saw pertaining to drones planting trees had to do with promises to plant a billion trees.

“It takes a lot of other steps beyond the scattering of seed to grow a forest, in my mind.”

The researchers cited a 2020 study by DroneSeed that found survival rates for some conifer tree seeds range between zero and 20 per cent, similar to prior efforts to drop seeds from planes or helicopters in the US in the 1950s and 1960s.