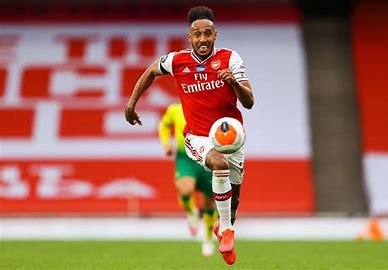 Pierre-Emerick Aubameyang scored Arsenal’s first league goal of the season in a 1-0 victory over Norwich to secure their first points and lift some of the pressure on manager Mikel Arteta.

Arteta’s future at the club has been called into question after a winless start and three successive defeats. And, with that in mind, the Spaniard made seven changes to his starting XI.

Aaron Ramsdale and Takehiro Tomiyasu made their debuts, with Ben White and Gabriel were together at centre-half for the first time. Ainsley Maitland-Niles made a surprise midfield start, with Nicolas Pepe, Aubameyang and Bukayo Saka in attack.

The hosts began brightly, with Tomiyasu’s strike from distance blocked by Grant Hanley. The visitors barely ventured out of their own half in the first 10 minutes.

But there were warning signs when Tzolis got away down the line. However, there were no Norwich players in the box to get on the end of his cross.

Albert Sambi Lokonga was the first Gunner to test Canaries keeper Tim Krul. The Belgian’s shot from outside the box was well held by the former Newcastle man after excellent work by Martin Odegaard.

Norwich might have taken the lead on 16 minutes but Kenny McLean’s header looped wide with Ramsdale rooted to the spot. Aubameyang loked devoid of confidence at times and found Krul too good when played through on 20 minutes.

The early sharpness appeared to drain for the north Londoners. And the half ended with Tomiyasu’s rasping shot well saved by Krul.

The Gunners faithful went into the half-time break without witnessing a league goal this season. Their heroes made an encouraging start after the interval.

But they still struggled to get a meaningful shot on goal. Time and again good build-up play was wasted by an errant final ball.

However, just before the hour mark, Aubameyang and Saka combined well before the latter managed to pull the trigger. Omobamidele blocked the England man’s effort as it was heading into the corner.

Just a minute later Aubameyang found Pepe but once again a Norwich body blocked the way to goal.

The home side continued to put pressure on Norwich and were finally rewarded on 66 minutes. The relief around the Emirates was tangible as Aubameyang bagged Arsenal’s first league goal of the campaign.

Pepe’s initial effort came back off the post before he bundled the ball towards the line. Aubameyang helped it home and, after VAR’s confirmation, the celebrations could begin.

The home fans began singing ‘we are staying up’ but soon had their hearts in their mouths after a Norwich penalty appeal. Brandon Williams went down in the box under a challenge for Pepe but the referee correctly waved play on.

The game continued to ebb and flow. But it seemed as though Arteta’s men were happy to hang on for a 1-0 triumph and three priceless points.

On 83 minutes, the men in red should have made it comfortable but Aubameyang fired straight at Krul. Two minutes later Cedric tried his luck from 25 yards out but this time the Dutch keeper was not called into action.

Arsenal deserved the points on the balance of play but needed Cedric to block Teemu Pukki’s shot right at the death. Arteta will sleep better on Saturday night but knows his side will need to improve against the top teams.