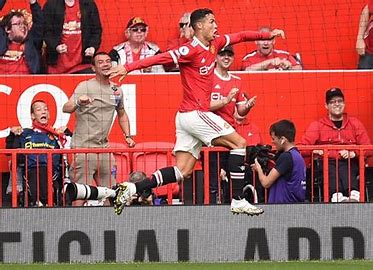 He turned Old Trafford into his new castle, his former Theatre of Dreams during the reign of legendary Manchester United manager Sir Alex Ferguson, who was in the in the stadium to watch his football “son” rekindle memories in match fellow countryman Bruno Fernandes one of the best goals this season so far.

He grabbed all the headlines on his second Manchester United debut, scoring twice in a 4-1 win over Newcastle.

The 36-year-old’s return to Old Trafford was much anticipated and he made no mistake when the time came to perform. After a frustrating first half despite chances for the hosts, he struck just before half time. Newcastle, who were equally impressive in the first half, hit back.

But Ronaldo scored his brace to cap a dream return, before Bruno Fernandes and Jesse Lingard added gloss to the score-line.

Portugal international Ronaldo had chances earlier in the half, but his goal was the easiest of them all, pouncing on Freddie Woodman’s error.

Man Utd dominated the first half, but Newcastle could also have taken the lead in the first 45 minutes. Indeed, Joelinton shot wide after getting past Raphael Varane on the break after the Frenchman’s misjudgement.

Despite eventually scoring, Ronaldo’s first effort saw him get a first-time volley all wrong and fall over. However, his step-over then did for Joe Willock before he shot into the side netting. Varane also almost redeemed himself, rising highest from Luke Shaw’s corner to head just wide.

Up the other end, Allan Saint-Maximan then led a counter-attack and set up Matt Ritchie. However, the Scotsman’s shot deflected into De Gea. Still, a better chance came and went for the visitors when Willock fired over from the right of the box.

But after Jadon Sancho’s shot went wide, Ronaldo put Ole Gunnar Solskjaer ‘s side in front deep into first-half stoppage time. Mason Greenwood’s shot from outside the area went through a number of bodies and Woodman consequently spilled his save. But Ronaldo reacted quickest, tapping home. That was his seventh goal in 12 games against the Magpies. However, Newcastle hit back inside 11 minutes of the second half.

Harry Maguire’s failed slide tackle on Miguel Almiron allowed the attacker to break away. His cross over to Javier Manquillo was pinpoint and the Spaniard finished brilliantly.

The Red Devils’ coaching staff suddenly looked animated, with Juan Mata and Donny van de Beek among the substitutes warming up. However, Ronaldo restored the hosts’ lead with his second of the match. After a nice passing move, Shaw released the winger, who put the ball through Woodman’s legs to make it eight goals in 12 games against the Magpies.

But Newcastle still showed threats, including Joelinton’s shot after a good run which De Gea had to palm away.

Fernandes has been the main man for some time at Old Trafford. As such, he had to get in on the act with Ronaldo dominating. The Portuguese crashed a long-range effort into the top left corner after not being closed down.

Newcastle’s desire had gone before that goal, but United would have loved to carry on and keep scoring.