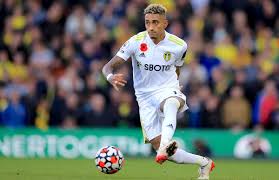 Raphinha is expected to secure a surprise £50 million ($61.3 million) move to Arsenal this week after Barcelona failed to formalise their interest in the Leeds United attacker.

Mikel Arteta is determined to strengthen his squad this summer and Arsenal have been strongly linked with Man City striker Gabriel Jesus while a shock £34 million ($41.7 million) deal for attacking midfielder Fabio Vieira was announced by Porto last week.

However, Arsenal are looking to bring in even more attacking reinforcements as The Athletic claimed over the weekend that Arteta also wants to sign Raphinha as well as Gabriel and Vieira.

The Gunners have stepped-up their pursuit of the Brazilian international as Goal claims that Raphinha is expected to secure a move to Arsenal this week after the north London submitted an offer for the winger.

The news outlet says Barcelona haven’t formalised their supposed interest and cannot afford Leeds’ £50 million ($61.3 million) asking price, so Raphinha isn’t prepared to wait around for the Catalans and wants to seal his move to Arsenal as soon as possible.

According to Goal, Arsenal have made the 25-year-old a lucrative package and as long as there are no late complications, Raphinha should secure a move to the Emirates Stadium over the coming days.

This would certainly come as a shock if this proposed deal does go through as it was not expected that Arsenal would spend so heavily on attack this summer. The Gunners have already acquired Vieira for £34 million ($41.7 million) and it will take around £50 ($61.3 million) to land Jesus, so splashing another £50 million ($61.3 million) on Raphinha that would amount to around £134 million ($164.3 million) on three attackers!

If Arsenal are buying Raphinha, then I’d expect we must be close to finding a buyer for Nicolas Pepe. The Ivorian has dropped out of favour and is looking to leave, so Arsenal must at least be confident of getting a decent fee for him if they’re spending £50 million on Raphinha.

As it stands, fans are waiting to see how things develop but it would be an excellent addition to the squad if the transfer goes through. Add Jesus, Tielemans and Martinez and Arsenal will suddenly have a squad packed with quality and depth.