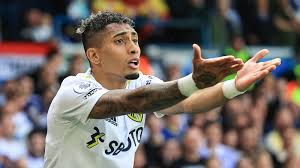 The Raphinha transfer saga appears to have taken a dramatic twist after a shock report claimed Barcelona are no longer in the running for his signing with the Leeds winger ready to sign for Arsenal this week.

The Brazilian star has lit up Elland Road since a bargain £17 million move from Rennes in October 2020. He scored six times, weighing in with nine assists in his debut season in the Premier League. And he was even better in 2021-22, proving Leeds’ best player with 11 goals and three assists as they, just about, avoided relegation.

But retaining his services beyond this summer looks a tall order for Leeds. According to transfer guru Fabrizio Romano, Rafinha has had an agreement in place with Barcelona for months. And the player has made no secret of his desire to make the move to the Nou Camp. To that end, his agent Deco has been doing all he can to engineer the move there for his client.

However, Leeds’ valuation has become problematic for Barcelona. Quite rightly, Leeds have stood firmly to their minimum £43m (€50m) valuation of the star. But with Barcelona struggling with their finances, the fee has remained a sticking point in negotiations. And despite claims they have agreed to sell on their merchandising and TV rights, the prospects of a move there appears to be fading.

As such, the Gunners were mentioned as a potential alternative earlier this week. Their prospects of a deal appear more solid, although it’s suggested they will need to move on Nicolas Pepe first. Now, according to Goal Brasil, Barcelona have accepted they do not have the economic capacity to make the deal happen.

The Blaugrana have until July 31 to address their FFP limitations. And with new signings Andreas Christensen and Franck Kessie to register as new players from July 1, their prospects now appear over.

There is the possibility that their situation could become clearer come August. But the report claims Raphinha does not want to wait and is now leaning towards Arsenal.

As per the report, Barcelona have now ‘disappeared’ from the running with the LaLiga giants no longer considered a viable destination. In addition, and crucially, Goal claims Raphinha is now ‘very close to signing for Arsenal’. Furthermore, they expect if all goes to plan, he could be a Gunners player before the end of the week.

That ties in with reports on Saturday claiming Arsenal now have a ‘renewed belief’ they can land Raphinha.

Make no mistake, the capture of Raphinha would be an incredible capture by Arsenal. The Brazilian looks likely to light up the 2022 World Cup and looks more than capable of playing on the world stage. As such, his long-standing desire to move to Barcelona is understandable. The Blaugrana have a long tradition of playing home to the world’s top Brazilian talents.

Furthermore, the chance to play in the Champions League is another obvious appeal. As such, and with Arsenal only offering Europa League football, the reported move does appear as a big shock. Surely, Raphinha would be better waiting it out. While Arsenal is a move up from Leeds, given the two club’s current standings, it is quite high enough in keeping with his game.

Instead, the player should simply just wait. A good World Cup would only see demand for him increase. Barcelona’s finances will likely change again come January too. Furthermore, Leeds would also have every right to raise their asking price further. Selling him to Barcelona is one thing. But allowing their star man to sign for a Premier League rival should come with an ‘English transfer premium’.

Confirmation of a Raphinha transfer to Arsenal would certainly soften the blow of missing out on Gabriel Jesus, amid claims Tottenham are playing an ace card to acquire him.