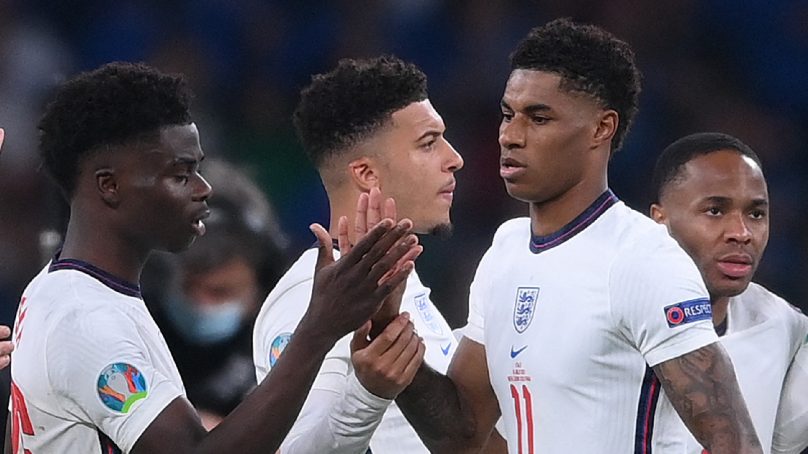 An independent report commissioned by FIFA has found that nearly 50 per cent of players involved in the semi-finals or finals of Euro 2020 or the African Cup of Nations received some form of abuse on social media.

World football’s governing body found that much of the abuse suffered by players was from their own home nations.

The report found that Marcus Rashford and Bukayo Saka, who both missed penalties in the final of Euro 2020, were the two most abused players.

It has also emerged in the report that homophobic and racist abuse made up nearly 80 per cent of the abuse that was identified. Of the abuse suffered by players during the final of Euro 2020, 76 per cent of it was anti-black racism.

The study, which used artificial intelligence to track over 400,000 social media posts across the time frame of the latter stages of both tournaments, found that abuse on Twitter was more consistent over a period of time while that on Instagram was more event-driven.

It ran from the end of the semi-finals to the three days after the final and in that time it emerged that managers of teams at AFCON received double the amount of abuse than their counterparts at Euro 2020.

During the Euro 2020 final, 78 per cent of the abuse was racist, with 23 per cent of that also containing a homophobic element. The majority of this was primarily targeted at the three black English players who missed penalties, the report says.

This dropped to 23 per cent for the AFCON final, but Fifa note that this is likely due to the ethnic make-up of the primary audience.

The report appears to pour scorn on the notion that those dishing out the abuse are unidentifiable, with it finding that 90 per cent of those who abused those involved in either the semi-finals or final of either tournament could likely be identified.

Eleven arrests were made by UK police forces in the weeks after England’s penalty shootout defeat to Italy.  A breakdown of the abuse suffered by Rashford, Sancho and Saka reveals startling evidence of the weight of – largely – racist abuse that they endured.

Meanwhile, of the 80 abusive posts targeting Rashford, around 50 were racially motivated. Sancho’s abuse appeared to be largely homophobic with that making up a large majority of the 18 or so abusive posts in his direction.

The breakdown of the abuse during the AFCON final reveals far less racism but more Islamophobia and xenophobia, perhaps owing to the viewing demographics. Sadio Mane, who missed a penalty during normal time in Senegal’s AFCON final win over Egypt, was one of the most abused figures in that particular game.

The report makes out that this abuse, much of it Islamophobic, was ‘event-driven’ by his penalty miss inside the first 10 minutes of the game. This abuse, it appears, reduced slowly throughout the game up until Mane scored the fourth and decisive spot-kick to win the tournament for Senegal.

One Egypt substitute, believed to be Mohanad Lasheen, who missed a penalty in the shootout, endured almost 50 instances of social media abuse. Much of this was either homophobic or violent.

Meanwhile, an Egypt coach received around 12 instances of xenophobic abuse, thought to be related to the event of a substitution or that same substitute missing a penalty. It is unclear if this abuse was directed at manager Carlos Quieroz, who was suspended for the final after being sent to the stands in the semi-final win over Cameroon.

With social media companies under increasing pressure to tackle rampant online abuse, the study reveals that 58 per cent of it remains online from across the two tournaments. While 87 per cent of the non-racist abuse is still live.

A breakdown of the abuse from each national location reveals a worrying trend in the United Kingdom, with over 38 per cent of all the abuse suffered across the two latter stages of the tournament coming from that area. The report says that abuse coming from outside of the nations concerned relates to domestic club allegiances.

FIFA’s president Gianni Infantino said: ‘Our duty is to protect football, and that starts with the players who bring so much joy and happiness to all of us by their exploits on the field of play.

‘With the FIFA World Cup Qatar 2022 and FIFA World Cup Australia and New Zealand 2023 are on the horizon, FIFA and FIFPRO recognise it is important to make a stand and to include what is monitored on social media with what is already being monitored in the stadiums. We want our actions to speak louder than our words and that is why we are taking concrete measures to tackle the problem directly.’