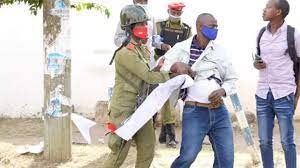 Tanzania’s main opposition Chadema party held a street protest Thursday with its supporters calling for the government to release their leader, Freeman Mbowe.

Police arrested Mbowe in July ahead of a meeting on constitutional reforms, and they are holding him on terrorism-related charges. Critics said the arrest and charges show that President Samia Suluhu Hassan is continuing the same strong-arm tactics as her predecessor.

Dozens of supporters of the main opposition party for democracy and progress, Chadema, appeared outside a court in Dar es Salaam Thursday with placards, chanting, “Mbowe is not a terrorist” and “Free Freeman Mbowe.”

An unspecified number of those protesters were arrested by a group of armed police who were deployed at the area to disperse the crowd. Mbowe, the leader of the Chadema party, was arrested last month in the port city of Mwanza before his planned address at a meeting to discuss constitutional reforms. Chadema General Secretary John Mnyika said none of the supporters arrested during the protests broke the law.

“We will follow up on those who have been arrested by police, but what we are insisting upon is that citizens show up Friday at 9am to demand accountability in the case,” Mnyika said.

Mbowe didn’t appear in court on Thursday. Instead, authorities attempted to hear the case using videoconferencing, but technical problems ensued and the proceedings were postponed until Friday. Peter Kibatala is one of Mbowe’s five defence lawyers.

“There were connection challenges, so we have failed to accomplish the process because there has been poor communication between the video conference facilities here at Kisutu court and that of Ukonga prison,” Kibatala said. “We have agreed that tomorrow [Friday] the accused will be brought to court.”

Other Chadema supporters, like Robert Mwasi, said the postponement was motivated by fear from authorities.

“Why did they postpone the case? I think it is because of fear since we as supporters have mobilized ourselves,” Mwasi said. “We demonstrate to convey a message to the world, and they see if they try Mbowe it will be a challenge to them.”

The Chadema general secretary told reporters at the court that their party will follow up to learn the fate of their arrested supporters and insisted citizens appear Friday.

Simon Sirro, the inspector general of police, warned against the protests and said the charges facing Mbowe have nothing to do with the constitution.

Sirro said, “Before the general election last year, I said there are people plans to burn fuel stations and kill government officials, those who led that campaign have to know that Mbowe is a human being and we have taken him to the court, so let’s leave the matter to the authority.”

Rights activists such as David Piniel say things may worsen under the leadership of President Hassan if she fails to negotiate with the opposition.

Piniel said, “This is an issue that can disrupt economic plans and other strategic plans in Tanzania. Especially considering the way the president is saying that she’s working on the economy first, but the economy cannot prosper if there are no effective ways to deal with these disputes with the opposition.”

President Hassan took over as Tanzanian president following the sudden death of her predecessor, John Magufuli. At her first days in power, there had been hopes that she would mark a pause with Magufuli’s autocratic rule.

The US undersecretary for political affairs, Victoria Nuland, met Wednesday with Hassan and later with opposition leaders, and said the United States will stand up for fundamental rights and freedoms.

Meanwhile, Mbowe continues to be held at a maximum-security prison in Dar es Salaam pending his trial Friday.