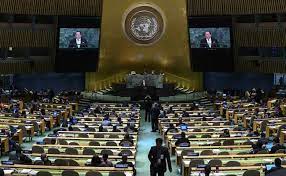 Russia has put forward a draft convention to the United Nations ostensibly to fight cyber-crime. The proposal, titled United Nations Convention on Countering the Use of Information and Communications Technologies for Criminal Purposes,” calls for member-states to develop domestic laws to punish a far broader set of offenses than current international rules recognise.

Russia, the ransomware hotbed whose cyberspies were blamed for attacking US and allied networks, did not join the 2001 Budapest Convention on Cybercrime because it allowed crossborder operations, which it considers a threat to national sovereignty.

The draft also directs members states to formulate domestic laws to disallow unsanctioned malware research – “the intentional creation, including adaptation, use and distribution of malicious software intended for the unauthorized destruction, blocking, modification, copying, dissemination of digital information, or neutralization of its security features, except for lawful research.”

The proposal also contemplates a broader basis for extradition by stating that, where allowed by domestic law, the listed cybercrimes should not be considered “political offenses” (mostly exempt from extradition under current international conventions).

The United States looks forward to an open, transparent and inclusive process for considering this new global treaty. The Biden administration has called for improved cybersecurity and following the recent US-Russia Summit, may be inclined to engage with Russia at the UN to modify the language of the proposal so that it’s compatible with US norms and policy goals.

“UN member states are beginning negotiations towards a new global treaty to combat cybercrime, which should take into account and preserve existing international agreements,” a US State Department spokesperson told The Register in an email.

“That process is still in a nascent stage and states only recently established the procedures and rules for treaty negotiations. The first negotiating session on the substance of a new treaty will take place in early 2022.”

“The United States looks forward to an open, transparent and inclusive process for considering this new global treaty. This submission from the Russian Federation is one of many anticipated contributions by member states to this process.”

Via Twitter, Dr Lukasz Olejnik, independent cybersecurity researcher and consultant, noted that the draft convention disallows online communication calling for “subversive or armed activities directed towards the violent overthrow of the regime of another State” and requires service providers to provide “technical assistance,” which generally means providing a backdoor for authorities.

“It’s another attempt in the longer history of such projects attempted for submission by Russia,” said Olejnik, a former cyberwarfare advisor at the International Committee of the Red Cross in Geneva.  Russia, he said, has been consistently submitting proposals of this sort for a while, pointing to a similar draft from 2011.

“This new proposal is particularly large, basically a complete proposal for a cybercrime or cybersecurity treaty,” said Olejnik. “While it is clear that cybersecurity is among the top agenda items in domestic and international policy (think the recent Biden-Putin meeting in Geneva as a good example), the proposal has a number of contentious items that would be rather hard to swallow for many Western countries and societies, in particular clauses such as those that would potentially curb freedom of speech, expression or press.”

“I don’t think that the project stands a particularly significant chance, at least as of today, but with the political process of the UN, who knows what happens in a few months,” said Olejnik.