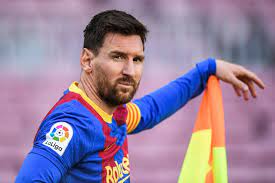 Barcelona announced on Thursday that Lionel Messi is a free agent after they could not negotiate a new contract with the Argentina star, but where will he be going?

As it stands, Lionel Messi’s future went up in the air after the bombshell on Thursday night that he would be leaving Barcelona. The Catalan giants revealed that the out-of-contract 34-year-old would end his stay at the Nou Camp after more than two decades. The two parties had agreed an extension, but were unable to formalise it because of LaLiga’s financial rules.

Joan Laporta is due to address the media on Friday after a tumultuous few hours in the club’s recent history which began with a statement on their official website on Thursday evening.

Already speculation is rife with RMC Sport and Sky Sport Italia reporting negotiations are underway between Paris Saint-Germain and Messi.

Apparently talks were underway for hours on Thursday night in a bid to push through a move in which the six-time Ballon d’Or winner would be reunited with former Barcelona team-mate Neymar.

PSG are though well aware that the drama around Barcelona’s announcement could be a tactic to pressure LaLiga around Covid-19 pandemic induced salary cap rules. So sources contacted by Get French Football News say PSG will have to strike quickly.

Spanish outlet Marca though have a different stance and report that a move to PSG is “looking impossible”. They claim that “Man City are the favourites to sign him” but acknowledge City have just spent £100 million ($139 million) on Jack Grealish and hold an interest in Harry Kane.

But Marca claim with “Kane’s deal far from done the Premier League champions already look to be changing their plans and turning their attention to Messi.” And Manchester City’s Chief Operating Officer Omar Berrada told the Manchester Evening News last October that City would be in a position to move for Messi if he became available.

“He’s an amazing talent, he’s somebody that can make a significant impact at any club in the world on and off the pitch immediately,” said Berrada.

“The fact that it was commented that he wanted to come to play for City just shows you how far the team has come over the last years where the best talent of his generation and potentially saying he wants to come and play for us.”

Paris St-Germain have immediately been linked with Messi, but the French capital is seen as just one possible destination for the in-demand Argentine, reports Le Parisien.

According to the Daily Mail Barcelona fans coming to terms with Lionel Messi’s departure are not convinced the “divorce” will last for too long. PSG are seen as favourites to sign the six-time Ballon d’Or winner, but a move to the US to play Major League Soccer cannot be discounted.