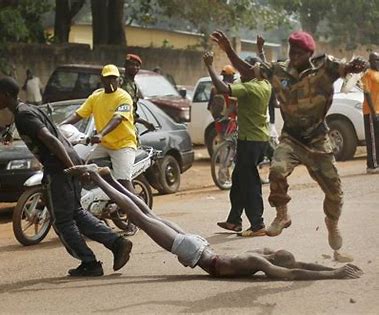 In the months since the junta ruling Mali invited Russia’s Wagner Group into the country, more than 450 people have died in military actions carried out by Malian Armed Forces (FAMa) in partnership with Wagner mercenaries, according to reports by the United Nations and others.

“Malian Armed Forces, supported on certain occasions by foreign military elements, increased military operations to combat terrorism…some of which sometimes ended in serious allegations of violations of human rights,” the UN’s Malian mission, known as MINUSMA, said in a report.

Mali’s experience is being repeated in other countries: anywhere the Wagner Group takes root, violence and death follow.

“They feed on the misfortune of people and thrive on politico-military crises, all over the world,” the staff of the Central African Republic’s Corbeau News Centrafrique wrote about Wagner recently. “Instead of building a regal and republican army in the service of the homeland, the FACA (Armed Forces of Central Africa) is allowed to compromise and ‘train’ with these so-called ‘partners.’”

As part of its deals with governments, Wagner sometimes is financed by mining contracts granted to affiliated companies also controlled by Wagner’s boss, Yevgeny Prigozhin, a close ally of Russian President Vladimir Putin.

The sale of resources such as gold and oil then flow into Wagner as payment for their involvement.

In addition to Mali and the CAR, Wagner Group mercenaries have a foothold in Libya, where they have fought on the side of Gen Khalifa Haftar. They have operated in Sudan and, briefly, in Mozambique until they were forced out.

In Libya, Wagner forces littered civilian areas south of Tripoli with booby-trapped landmines, including some tied to children’s toys, after they were driven back during a failed assault on Tripoli in 2020.

The United Nations estimates that Wagner has more than 2,100 mercenaries in the CAR, where they have been accused of kidnapping, torture and summary executions of suspected government opponents.

Wagner forces also have mined roads and planted bombs near schools. Civilians told Pass Blue, a site that reports on the United Nations, that Wagner mercenaries confiscate smartphones when they enter a community to block residents from documenting their atrocities.

Wagner forces brought in to train the Malian military reportedly led a campaign in March in Moura that killed more than 300 people, including up to 100 unarmed people suspected of being rebels, according to an HRW report.

Witnesses who survived the attack on the market in Moura told Reuters that a group of white men speaking Russian arrived in helicopters alongside Malian forces and were the first to open fire on fleeing civilians. Forces remained in Moura for four days interrogating and executing residents. Russia later blocked a UN attempt to investigate the deaths.As a result of Wagner’s violence, civilians in Mali are turning for protection to the same extremist groups the Malian military is targeting.

One resident of Gossi told France’s Le Figaro: “We fear Wagner much more than the terrorists, really. The terrorists, they have never come to destroy a market.”