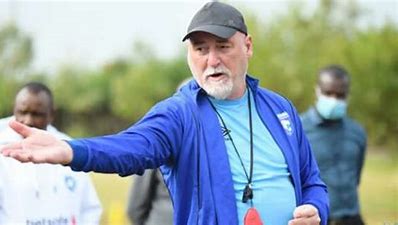 AFC Leopards’ quality of football is 30 years ahead of other clubs in Kenya Premier League, says coach Patrick Aussems, who has been at the helm of football giants’ technical bench for two seasons.

Speaking to Tell Television at the club’s training ground at Camp Toyoyo in Jericho Estate, Nairobi, on February 2 ahead of the resumption of the league after a two-week, Aussems praised his team as a group of young players that are keen to excel where other Kenyan footballers are failing or have failed.

Aussems philosophy has rekindled memories his compatriot Luc Eymael, who between 2012 and 2014 bamboozled Kenyan Premier League neat passing football or tiki-taka that had him attract interest from all over Africa. While Eymael’s AFC Leopards team excelled in wing-play, Aussems’ tiki-taka is unpredictable and can draw opponent’s blood from any angle.

The two Belgians have completely changed how AFC Leopards from hard-running, long passes and kicking-the-ball-forward to a sexy brand that starts build-ups with the goalkeeper.

Despite not winning many matches the young squad is attracting fans to the stadium to the envy of other premier league teams.

Aussems observes that Kenyan club football – even the national team – is still in doldrums as they still play the old-fashioned British kick-and-run power football.

Aussems has faith that if the current squad is retained, AFC Leopards will be in a class of its own next season given the quality and adaptability in the team.

He reserves the harshest criticism for local referees – especially male – saying they are possible conduits for match-fixing.

“Perhaps the only good referee I have seen in Kenya is a woman,” he says. The rest, he adds, do not merit to be referees.

The vice has been a point of concern in Kenyan sport in the past five years, leading to one club Zoo Kericho being flagged and banned by world football governing body Fifa last season.

A number of players from the same team and other local teams were also handed bans ranging from a few years to life bans.