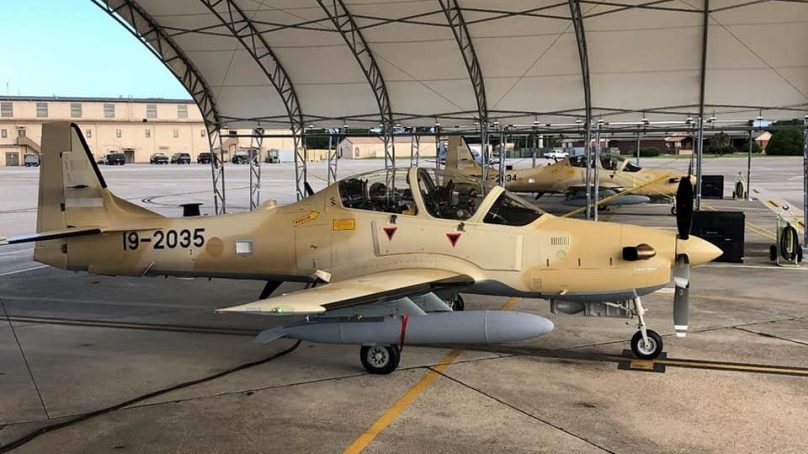 The final batch of six A-29 Super Tucanos destined for the Nigerian Air Force (NAF) have left the United States, and arrived in Nigeria on Friday.

The six aircraft, out of an order for 12, departed Moody Air Force Base on September 15. They transitd via Iceland, Scotland, Spain and Algeria before arriving in Nigeria on September 24.

The six aircraft, flown by American pilots, are accompanied by a Dornier 328 support aircraft provided by Sierra Nevada Corporation. The delivery flight was seen departing Goose Bay, Canada, on September 17 and arrived in Glasgow, Scotland, on September 19. They were due next in Zaragoza, Spain.

The first six NAF Super Tucanos flew through five Canada, Greenland, Iceland, Spain and Algeria before arriving at their final destination in Nigeria towards the end of July. They were officially inducted into service on August 31 in Abuja.

The 12 Super Tucanos were acquired under a nearly $500 million Foreign Military Sale (FMS), with the aircraft manufactured by Brazil’s Embraer and the United States’ Sierra Nevada Corporation. The US Embassy pointed out that the Nigerian Super Tucano deal is the largest FMS programme in sub-Saharan Africa.

The Super Tucanos will assist the Nigerian Air Force in their fight against violent extremist organizations including the Islamic State West Africa Province.