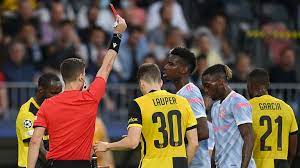 Cristiano Ronaldo’s Manchester United honeymoon is over as the Red Devils suffered a shock 2-1 defeat to Young Boys in the Champions League. The Portuguese made a blistering start to the clash in Switzerland, however, as he opened the scoring after latching onto a delightful Bruno Fernandes cross from the left.

The course of the match turned 10 minutes before the break when Aaron Wan-Bissaka was shown a red card for a late challenge on Christopher Martins. Man United went into their shell after that and the home side, managed by ex-Huddersfield boss David Wagner, carved out good opportunities for the remainder of the match.

They levelled on 66 minutes as Moumi Ngamaleu turned in a low cross from the right past David de Gea.

It looked set to be honours even at the end but a dreadful back-pass from Jesse Lingard, who came on for Ronaldo late in the second half, went straight to Theoson Siebatchu, who scuffed in the winner in the final minute of stoppage-time.

The Swiss champions have claimed a huge scalp on the opening night of the 2021/22 Champions League proper. Following their feelgood win over Newcastle at the weekend, Man United started with confidence and Ronaldo scored his third goal in his second spell at the club on 13 minutes.

Ronaldo took advantage of the sleeping Young Boys defence as he latched onto Fernandes’ delightful outside of the boot cross from the left and fired through David von Ballmoos.

However, Ole Gunnar Solskjaer’s men lost all rhythm when Wan-Bissaka was given a straight red card for catching Christopher Martins on the ankle.

The hosts were buoyed by this and controlled things from that point. They levelled things up on 66 minutes when Ngamaleu was the first to get on the end of a cross which bounced unpredictably along the 4G pitch.

But Manchester United left empty-handed as Lingard’s weak pass towards De Gea fell straight to Siebatchu, who got the ball past De Gea to send the Wankdorf Stadium into ecstasy.