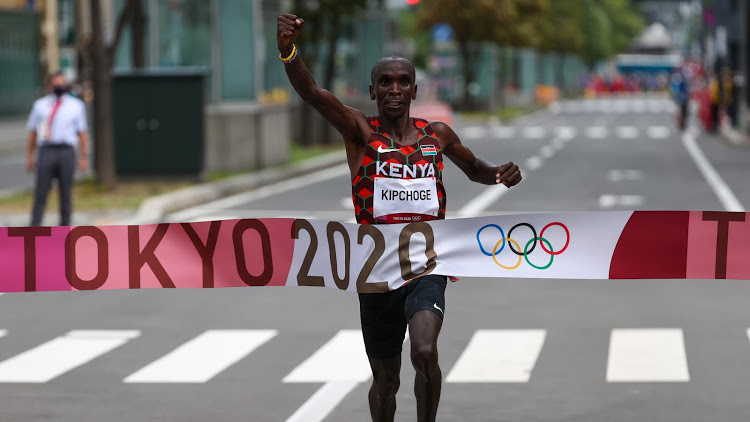 Moments after romping home to take the Tokyo Olympic Games marathon gold, Kenyan’s marathon king Eliud Kipchoge assured the athletics world that “You will see me around.”

For a high-achieving man who took the world by storm with the mantra “No human is limited,” the words implied he was not thinking of retiring after finishing the race in two hours, 8 minutes, 38 seconds on a breezy and humid Sunday along the streets of Sapporo.

The win elevated Kipchoge to “Living Legend” status, a feat that has no equivalent in recent history. After taking it easy for long periods of the race, which he controlled with aplomb, pulled away late and no one could come close to catching him as the 36-year-old from Kenya defended his Olympic marathon title.

That was Kenya’s fourth gold of the Tokyo Games, a feat that has been adjudged as underwhelming in a country that teems with talent despite competition from neighbouring Ethiopia and Uganda. With four golds, Kenya was ranked top African country followed by Uganda with two and Ethiopia one.

Kipchoge crossed the finish line more than 80 seconds ahead of runner-up Abdi Nageeye of the Netherlands. Bashir Abdi of Belgium earned bronze to close out the track and field portion of the Tokyo Games.

Kipchoge’s victory margin of 1 minute, 20 seconds was the biggest since Frank Shorter’s win in the 1972 Munich Games. The 36-year-old’s triumph, his 13th win in the 15 marathons he has raced since 2013, came a day after teammate Peres Jepchirchir secured back-to-back women’s Olympic marathon titles for Kenya’s women.

“I think I have fulfilled the legacy by winning the marathon for the second time, back-to-back. I hope now to help inspire the next generation,” Kipchoge said.

“It means a lot for me, especially at this time,” he added of winning his second gold medal.

“It was really hard last year, it (Olympic Games) was postponed. I am happy for the local organising committee who made this race happen. It is a sign that shows the world we are heading in the right direction – we are on the right transition to a normal life.”

The ease with which Kipchoge controlled the race made it look like a running clinic. His signature smile never vanished despite the sweltering weather conditions that claimed more than 10 athletics of the 106 who started the race. He smiled along the way and even fist-bumped a fellow racer.

Kipchoge becomes the third athlete to win multiple gold medals in the men’s marathon, joining Abebe Bikila of Ethiopia and he is on the cusp of being regarded ad the greatest of them all.

Kipchoge, wearing white-and-pink Nikes, took off around the 30-kilometre mark and never looked back. Well, once, near the finish. There was no one even close.

On a day with plenty of cloud cover, Kipchoge cruised. The temperature was around 77 degrees Fahrenheit (25 Celsius) at the start and climbing to 84 (29). The men’s race stayed at the same time after the women’s race was moved up an hour the day before to avoid the heat.

It was humid, though, at 81 per cent as the runners wound their way through Sapporo, which is located about 500 miles (830 kilometres) north of Tokyo. The race was moved to escape the extreme heat, but it was about the same temperature in Tokyo and rainy.

Taking the starting line were 106 runners. Finishing were far less, with more than two dozen not finishing. The top American was Galen Rupp in eighth place.

Along the way, runners were treated to actual fans clapping and cheering. One fan even brought drums, making the atmosphere feel almost normal. Spectators have not been allowed in the venues during the Tokyo Olympic due to coronavirus protocols.

The fans saw a dominating performance from Kipchoge, who was a huge favourite as both the defending champion from Rio de Janeiro and the world record holder – 2:01:39. In October 2019, he became the first to complete a marathon in under two hours.

The time didn’t count as a world record, though, because it was not held under race conditions.

Already etched in the Kenyan record books, Kipchoge added another chapter: He joined Kip Keino and Vivian Cheruiyot on the women’s side as the only ones from the country to win four Olympic medals.

Kipchoge diligently trained at elevation to get ready for this race. He said the key to running is not magic science. It’s not rocket science, to be at the top for a long time. Instead, he attributes his systems for his success teammates who can push him and a coach who can teach.

I have what it deserves for me to actually stay long, he said. This may or may not be his last big race. He played coy when asked about it recently.