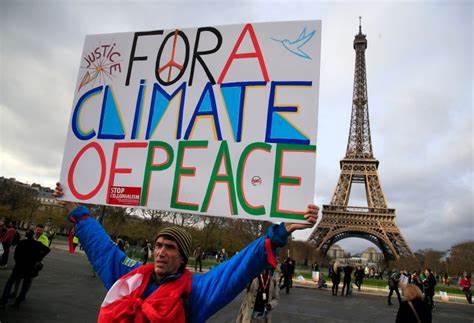 The United States, Japan, Canada and France are some of the countries that have made their targets public as the world marked Earth Day on Thursday last week.

President Joe Biden has promised that the US aims to cut carbon emissions by 50 per cent to 52 per cent from 2005 levels by 2030. Japanese Prime Minister Yoshihide Suga and Canadian Prime Minster Justin Trudeau have also upgraded their targets to more than 40 per cent over the same period.

The move by US government follows President Biden’s election campaign to restore America’s to Climate Change agenda, four years after his predecessor Donald Trump termed climate change a hoax. Trump went ahead and delisted the US from the world climate change campaign. However, Biden reversed Trump’s policies on environment and immediately acceded to the need to decarbonise the world.

According to the Washington Post, “The move reflects the massive gulf between Democratic President Joe Biden and Republican ex-President Donald Trump on climate change that is likely to result in sweeping policy changes in the coming years to tamp down on planet-warming emissions from vehicles, power plants, and industry.”

As 40 world leaders recommitted to climate change agenda, African Development Bank President Akinwumi A. Adesina joined then at the Leaders’ Summit on Climate, where the United States, Japan and Canada announced their revised targets.

The United States hosted the two-day virtual summit. It coincided with Earth Day on Thursday and gave a platform to a diverse range of voices, particularly those from developing countries that have been directly affected by climate-linked disasters and the Covid-19 pandemic.

Biden also announced plans to triple public financing for climate in developing countries by 2024. “Meeting this challenge requires mobilising financing on an unprecedented scale. The private sector has already recognised this – they know that climate change is more than a threat. It also presents the largest job opportunities in history,” Biden said. “But the private sector has more to do and must do. Let’s be clear, even then the private sector cannot meet these challenges alone, governments need to step up and may need to lead.”

During a panel discussion titled “Financing the 10-year Sprint,” Adesina spelled out the challenge that confronts the African continent as the climate crisis worsens and the world races to meet the 2030 deadline for the 17 United Nations Sustainable Development Goals.

Africa contributes the least to rising temperatures but has suffered the worst impacts of climate change, in the form of droughts, floods and plagues like the recent locust invasion in East Africa.

Adesina said: “The continent loses $7 billion to $15 billion a year to climate change and this will rise to $50 billion per year by 2040, according to the IMF (International Monetary Fund). Africa is not at net zero. Africa is at ground zero. We must therefore give Africa a lift to get a chance of adapting to what it did not cause.”

Adesina also highlighted the African Development Bank’s role as a climate change warrior. He said the bank had committed $25 billion to climate finance over the next four years. Its share of financing devoted to climate rose from nine per cent in 2016 to 35 per cent in 2019 and will reach 40 per cent in 2021.

In addition, the African Development Bank recently joined forces with the Global Centre on Adaptation to launch the Africa Adaptation Acceleration Program, which aims to mobilize $25 billion for climate adaptation by 2025. Supporters of the initiative include UN Secretary-General António Guterres and US Treasury Secretary Janet Yellen.

Speakers who preceded the panel included President Félix Tshisekedi of the Democratic Republic of the Congo, who is the current African Union chairperson, Prime Minister Jacinda Ardern of New Zealand, Prime Minister Andrew Holness of Jamaica and President of the Council of the European Union Charles Michel.

Tshisekedi, whose country is home to one of the world’s green lungs in form of the Congo Basin – as well as the global provider of coltan, used to manufacture tantalum capacitators used in mobile phones, personal computers, automobile electronics and much more – said:

“It is important that the summit accelerates the mobilization of additional financial resources, and this should be substantial. This also requires simplifying the procedures for accessing financing for the least developed countries, the majority of which are in Africa,” he said.

Speakers also discussed efforts to shift trillions of dollars of private investment to finance the transition to net zero carbon emissions by 2050. This is what world leaders agreed to in the Paris Agreement at the global climate summit in Paris in November 2016.

A key part of the discussion on Thursday dwelt on the $100 billion that wealthy nations had agreed to mobilize annually by 2020 to address the climate financing needs of developing countries.

Malpass said the core of the World Bank’s action plan, a summary of which was published on Thursday, was to spend record amounts to obtain optimal results. “This is the path I hope others will follow,” he said.

The IMF’s Georgieva proposed robust carbon pricing and phasing out carbon subsidies. “Our analysis shows that without it, we will not reach our climate carbonization goals. It also shows that a mix of steadily rising carbon prices and green infrastructure investment could increase global GDP by more than 0.7 per cent a year over the next 15 years, and create millions of good-paying new jobs.”

Predominantly White institutions are reluctant to hire Blacks and Hispanics