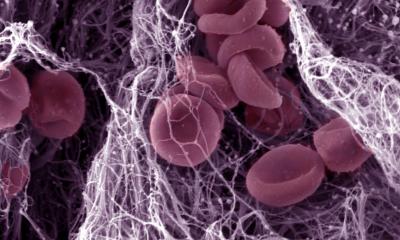 It is clear that the risk of developing the HIT-like clotting syndrome is very low, with 86 potential cases reported in Europe out of 25 million people vaccinated as of March 22. But the exact number of cases is in flux.

Researchers are relying on reports of adverse events after vaccination, and such reporting is susceptible to biases and misclassifications, says Saad Shakir, director of the Drug Safety Research Unit in Southampton, UK.

HIT is a condition known as heparin-induced thrombocytopaenia (HIT), a rare side effect sometimes seen in people who have taken the anti-coagulant heparin1,2,3 — even though the vaccine recipients had not taken a drug.

A complex syndrome such as HIT could be misclassified in some cases, particularly before the news of the possible link to vaccines had spread. And now that the potential association has become public, clinicians will be on the lookout for it, and reporting could increase.

This means that in the coming weeks, the number of adverse events might be found to be higher than previously thought.

It is difficult to parse the data and determine who is at greater risk of developing the clotting syndrome. Public disclosures of data in Europe and the United Kingdom have lacked key information that researchers outside regulatory agencies need to pick apart such risks, says biostatistician Sheila Bird, former programme leader at the Medical Research Council’s Biostatistics Unit at the University of Cambridge, UK. “To not disclose that information basically handicaps inference by people who know how to draw inference,” says Bird. “And I don’t like having my hands tied behind my back.”

The small number of clotting events reported so far and uneven vaccine distribution add to the difficulty. Early reports suggested that relatively young women who received the vaccines were most likely to experience clots, but the European Medicines Agency reported last week that it could not identify any particularly high-risk groups from its data on the AstraZeneca vaccine.

The apparent bias towards women could be the result of many countries prioritizing vaccination for health-care workers, who are predominantly female.

Identifying these risk factors could allow regulators to better determine the risk of the vaccine relative to the risks of Covid-19, which vary with age and other factors. But such analyses may have to wait for more reports of adverse events to roll in. “These things take time,” says Shakir.

Some researchers are quick to point out that the concerns about the AstraZeneca and J&J vaccines are a sign that safety monitoring is working, and is able to pick up rare events among millions of vaccine recipients worldwide. And if regulators had not reacted by pausing vaccinations and transparently discussing the data at hand, this could have lessened the public’s faith in that safety monitoring.

But how the risks are communicated to the public is crucial to maintaining trust, says Noni MacDonald, a paediatric infectious-diseases specialist at Dalhousie University in Halifax, Canada. Over the past few weeks, the nature and severity of the concerns about clotting have changed as more data have emerged, she notes. This, coupled with technical discussions about risks and medical conditions, might feed confusion.

Once public trust in a vaccine has been damaged, it can be hard to recover. “Negative information sticks longer and harder, and it’s also heard louder,” MacDonald says. “If you were already anxious, this made you more anxious.”

Any further restrictions on the use of these vaccines – whether due to regulatory decisions or vaccine hesitancy – could have a global impact. Both vaccines are relatively cheap to make and easy to store compared with mRNA vaccines, and both vaccine developers had agreed to distribute doses at low prices to low- and middle-income countries through the Covax programme.

In South Africa, Goldstein says, only about one-third of healthcare workers have been vaccinated so far, even as the country anticipates a third wave of coronavirus infections. There isn’t widespread access to mRNA vaccines, and the AstraZeneca vaccine is less effective at preventing infections from a coronavirus variant that dominates infections in the country.

The J&J vaccine, which can be given in a single dose, promised to be pivotal for the vaccination of hard-to-reach groups, such as people who are homeless, those affected by substance abuse and those who are housebound.

“Putting this vaccine on pause, for those of us that are front-line health-care workers, has really been devastating,” Camille Kotton, an infectious-diseases specialist at Massachusetts General Hospital in Boston, said during a meeting of vaccine advisers to the US Centers for Disease Control and Prevention on 14 April. “This one-and-done vaccine that didn’t require the cold chain that the mRNA vaccines do is a significant loss.”