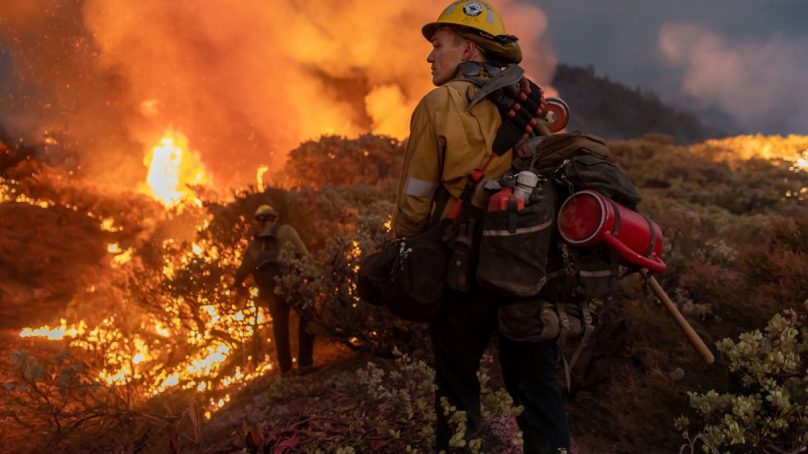 On a cool September morning in San Francisco, a group of firefighters packed their gear into a bright red van. The sickly-sweet odour of pine resin from a distant blaze hung in the air as the crew prepared to battle the rapidly growing Dixie fire, on its way towards becoming the largest single wildfire in California’s history.

Sweeping across the Sierra Nevada mountains, it would come to scorch more than 3,900 square kilometres before crews fully contained it in late October.

The firefighters had one more stop before they joined the thousands of other people working to control the blaze. In a small classroom inside the San Francisco Fire Department’s training building in the Mission District, Mary Prunicki and a team of researchers collected questionnaires and blood samples from each firefighter.

Prunicki, a pollution biologist at nearby Stanford University, will use the samples as a baseline to compare with ones taken when the firefighters return. She’ll be looking for signs of their bodies’ reaction to the smoke, including inflammation and changes to immune and heart function.

Smoke from wildfires is responsible for tens to hundreds of thousands of premature deaths around the world each year. And Prunicki is one of hundreds of researchers trying to understand the health effects of smoke exposure.

Scientists want to know what it is in wildfire smoke that makes it more harmful to humans than other forms of pollution. They are looking at short-term and long-term effects; who is most vulnerable to the pollutants; and how best to keep people safe and healthy in smoke plumes that can stretch for thousands of kilometres from a blaze such as the Dixie fire.

The work has taken on fresh urgency in recent years. Climate change has been exacerbating droughts and heatwaves around the world, nearly doubling the total area where the right spark could set dry vegetation ablaze and trigger an inferno. As a result, wildfires are increasing in frequency, size and intensity around the world, and smoke seasons are getting longer.

Wildfires have ravaged the western United States in the past decade, but other countries have also faced their worst blazes in generations. Fires in the Siberia region of Russia this year burnt a bigger area than all the world’s other blazes combined.

And Australia is still reeling from its devastating 2019-20 bushfire season, colloquially called the ‘black summer’, which destroyed thousands of homes and killed at least 30 people and hundreds of millions of animals.

“If you compare the last 5 years to the 10 to 15 years before that, it’s just not really comparable,” says Sam Heft-Neal, an environmental economist at Stanford University who studies the health risks of wildfires. “It’s like a totally different fire regime.”

Wildfire smoke contains dozens of different particles, such as soot, and chemicals, such as carbon monoxide, but one of the main concerns for air-quality specialists are the tiniest particles in smoke that measure 2.5 micrometres or less across (on average 1/40th the width of a human hair). The firefighters working with Prunicki will encounter copious amounts of this PM2.5, as it is known.

But according to Francesca Dominici, a biostatistician at the Harvard T. H. Chan School of Public Health in Boston, Massachusetts, there is no amount of fine particulate matter that is safe to breathe because it is known to penetrate deep into the smallest crevices of the lungs and enter the bloodstream (see ‘Risky exposures’).

When smoke enters the airway, the body reacts “like there’s germs and infection in there”, says Fay Johnston, an environmental epidemiologist at the University of Tasmania in Hobart, Australia. That comes with a whole suite of physiological changes: the hormone cortisol and blood glucose spike, which in turn makes heart rhythms less stable and blood more likely to clot. The lining of the lungs becomes inflamed, making it more difficult to breathe.

Prunicki hopes to understand these physiological changes by measuring certain biomarkers — molecules in the blood — that can give a snapshot of immune, respiratory and cardiovascular function. She has turned to firefighters, people who face high occupational exposure to smoke, to see whether she can detect any changes in their biomarkers after direct exposure — and whether the changes are long-lasting or similar to those seen in people who don’t fight fires but are still subjected to smoke.

Close to a fire, PM2.5 can sometimes reach levels more than 15 times greater than the 24-hour exposure standard of 35 micrograms per cubic metre set by the US Environmental Protection Agency (EPA). But many firefighters don’t wear respirators when they are battling blazes because they can be cumbersome, says Prunicki. “This level is outrageously high,” says Dominici. “At that point, you’re just breathing a toxic soup.”

But even lower levels might pose a severe health risk, she says, because in such conditions people are less likely to take protective measures such as wearing a respirator. Prunicki has shown that, even in areas more than 100km away from wildfires, smoke exposure is linked to a slew of changes in biomarkers that might be a sign of immune and cardiovascular dysfunction1.

Wildfires don’t happen in a bubble, either, says Dominici. Smoke can predispose people to infectious diseases or exacerbate the symptoms of other respiratory conditions, including Covid-19 and influenza. Dominici and her colleagues estimate that increased PM2.5 levels during the 2020 fire season in Washington, California and Oregon correlated with about an extra 19,700 Covid-19 cases and 750 deaths.

The leading hypothesis for the cause of the excess cases is that PM2.5 compromises the immune system and causes inflammation, which could make people more susceptible to infection or exacerbate the effects of disease, leading to a rise in positive diagnoses. A more controversial take, says Dominici, is that some respiratory viruses might hitch a ride on fine particulate matter when entering lung tissue.

Underlying health conditions pose another problem, says Johnston, especially if smoke is affecting millions of people at once, as it did during Australia’s black summer. Her team reported that those fires led to an excess of thousands of hospitalizations and hundreds of deaths from heart and respiratory problems stemming from the smoke, which blanketed nearly 80 per cent of the country’s population3.

On high-smoke days, hospital-admissions data show an increase in the number of people being admitted with cardiovascular and respiratory problems and diabetes, particularly children and older people. Pregnant people might also be at higher risk of having gestational diabetes, high blood pressure or giving birth to low-weight babies: Heft-Neal’s research estimates that nearly 7,000 excess premature births in California between 2007 and 2012 can be attributed to wildfire smoke exposure during pregnancy.

Socio-economic status, too, cannot be overlooked, says Dominici. People in under-resourced communities are more likely to have outdoor occupations, such as farming or landscaping, higher rates of accompanying diseases and conditions and less access to adequate health care and air purifiers — all of which make wildfires an even greater burden for communities of colour and low-income communities, she says.

Studying the long-term health effects of smoke on humans has proved difficult. Longitudinal studies to track people’s health after exposure would need to span decades and distinguish between the effects of many different environmental exposures.

One day, the neglected Mt Nyiragongo volcano in DR Congo will kill thousands in 30 minutes – expert