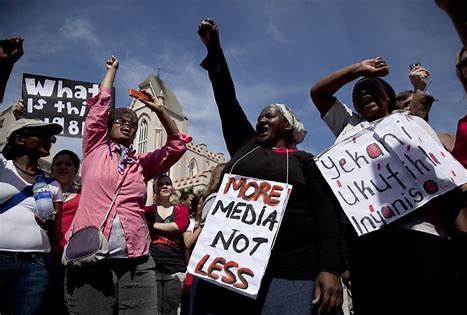 Across Africa, laws and customs respecting the media vary considerably. As the world marked World Press Freedom Day on Tuesday, the occasion offered moments of reflection on the brightest and darkest situations for the continent’s news media.

On the positive side is the southwest African nation of Namibia, ranked the continent’s most free country and 24th worldwide in an annual index by the Paris-based Reporters Without Borders (RSF) organisation. At the very bottom is Eritrea, considered the least free not only in Africa but also among all 180 countries in the ranking.

Namibia’s judiciary is “very protective” of media freedoms, something that is “quite rare” elsewhere in Africa, said Arnaud Froger, head of RSF’s Africa desk. He added, “Generally, it is quite safe to be a journalist in Namibia.”

Namibia’s stance on media freedom can be attributed to the country’s “very violent history,” said Zoe Titus, director of the Namibia Media Trust, which publishes The Namibian newspaper and also promotes free speech and information access within and beyond the country’s borders.

Namibia gained its independence from South Africa in 1990 following years of bloodshed in the apartheid era. Earlier, Namibia had been a colony of Germany, which last year officially acknowledged it committed genocide against ethnic Herero and Nama early in the 20th century.

”Colonialism and apartheid denied us the right to freedom of expression for so long, and so now that we have that right, we guard it very diligently,” Titus said. She noted, “Occasionally, you’ll find that some strained ministers or other public officials will threaten something like social media regulation or talk about hate speech online or regulating media freedoms, but that is nipped in the bud very quickly.”

A bill promoting “the public’s free access to information held by public entities” was reintroduced last fall to Namibia’s National Assembly, but Covid-19 lockdowns impeded parliamentary debate, The Namibian reported. It said the information minister resubmitted the bill with the intent of improving public access and government accountability. The measure would better enable journalists to probe government records and actions.

”The Access to Information Act has still not been approved,” said Angela Quintal, the Committee to Protect Journalists’ Africa director. Speaking from Durban, South Africa, she told VOA, “Media freedom is about the public’s right to know – and we have seen delays with [the bill] in Namibia, and that’s problematical.”

Still, Quintal said, Namibia has been supportive of journalists.

“We’re not seeing the weaponisation of technology against journalists – the sort of online harassment and violence against female journalists – nor are we getting a sense of the emergence of anti-social media laws,” she said.

Titus said the southwestern nation of 2.6 million seems to understand that the relationship between the media and the state is one of questioning. “There must be a push and pull all the time,” she said. “If we were too comfortable, that means the media is not doing its job.”

Froger, of the RSF’s Africa desk, said Eritrean President Isaias Afwerki has waged one of the world’s worst assaults upon media freedom. While global attention was focused on terrorist attacks on the United States on September 11, 2001, that year Isaias shut down the independent press. The Horn of Africa country now has roughly 3.7 million people, according to the United Nations Population Fund, with extremely limited outside news access.

“If a foreign journalist wants to report in Eritrea, you’re not allowed to do so. And if you are, you’ll be followed and the people you’ll interview will be closely monitored by the regime,” Froger said. “There’s absolutely no freedom of information and no access to information because journalists have been banned from doing their jobs.”

He added, “There are no private media and all journalists have either fled the country or have been jailed while others face torture.”

Dawit Isaak, a Swedish-Eritrean journalist, was arrested and detained without trial in 2001. RSF said he was briefly released in 2005, but just two days later ”snatched” from his family. Isaak has been held incommunicado by the regime. According to a group of UN experts, citing credible sources, the journalist was alive as of September 2020.

The watchdog groups Reporters Without Borders and the Committee to Protect Journalists reiterate their calls for the release of jailed journalists, who are labelled as ”prisoners of opinion/conscience” in this East African nation.

CPJ “would like to see all those journalists get away from the ‘surveillance state’ that exists,” Quintal told VOA.

Froger offered an Eritrean example that ties into the World Press Freedom Day’s 2022 theme, “Journalism Under Digital Siege.” Eritrea, incidentally, has one of the world’s lowest internet usage rates – for good reason.

“To visit internet cafes, people must submit their ID cards,” Froger said. “And everything you do on the internet must be monitored by the authorities.”