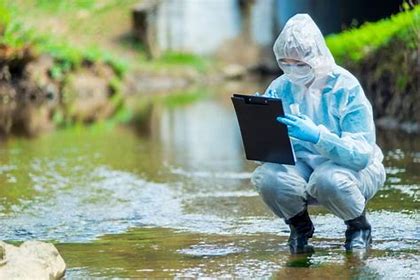 The ability of wastewater testing technology to identify coronavirus hotspots is governed by the service area of the treatment plant: the wider the spread, the harder it is to pinpoint small outbreaks and at least one facility serves more than 850,000 people.

The technology can provide an unbiased snapshot of community health because whatever access they have to the healthcare system, everyone has to go to the toilet. But Cape Town epidemiologist Natacha Berkowitz, says that the goal is to “localise infection down to a small unit area, like a suburb”.

After the pandemic, the city plans to use waste water to regularly monitor for polio and other viruses. Although South Africa has been declared polio-free, missed vaccinations during the pandemic could result in an outbreak.

“If we get a positive signal for polio, we’ll look at that specific drainage area, and perhaps do increased vaccinations or community education,” Berkowitz says.

The advantage of wastewater testing is that it samples the population without requiring any action from individuals. It’s also cost-effective, because a single sample can be tested for multiple pathogens. And most labs can do the testing. “If you have a medical set-up for pathogen testing,” says Janet Mans, a virologist at the University of Pretoria, “you should be able to do this.”

But the technology also has downsides. It’s not easy to tie a signal to a specific location or group, for instance. Furthermore, it monitors only households that are connected to the sewerage system. And some 40 per cent of the nation’s households do not have a flush toilet attached to the sewers, according to the 2011 census. Extending testing to these areas would capture much more of the population.

In Pretoria, a private facility known as Waterlab is working with the WRC to expand testing to unsewered communities. The idea is to build a framework to start using samples from rivers and surface waters, says Gina Pocock, Waterlab’s specialist consultant.

To monitor trends over time, samples are taken from sites that are consistently contaminated with waste water. That includes rivers downstream of unsewered, informal (or unplanned) settlements and surface run-off both of ‘grey’ water from bathing and sinks around standpipes and of ‘black’ water, which pools near latrines and contains faecal matter.

Such samples can be difficult to work with. Mans, who is working with Waterlab on ways to extract and test nucleic acids, says that environmental samples often contain compounds that can inhibit the amplification of nucleic acid by PCR, so addition of internal control sequences are a must. If the internal control is still inhibited after the sample has been diluted by one part to ten, that sample is considered invalid, says Mans. A target can be considered negative only if the internal control amplifies at that dilution.

Equally difficult is the analysis, especially determining how many people the sample might represent. The researchers have to use overall trends in other parameters as proxies for the number of people. At Waterlab, Pocock says, researchers use bacterial density “to get an indication of the faecal load in the water”.

We don’t know “how many people flushed their toilet this morning”, Pocock says. “It’s not a definite science, where you can say this is our viral load and X amount of people in this community are sick. And with the rivers, even less so. So, we look at trends.”

Those trends should help in assessing the effectiveness of South Africa’s response to COVID-19.

Rolf Halden, director of the Biodesign Center for Environmental Health Engineering at Arizona State University in Tempe, has been testing waste water for nearly 20 years. Last year, he took part in a study to look at the feasibility of mass surveillance, testing the wastewater of 36 million people in 100 US cities twice a week for eight weeks for SARS-CoV-2. His goal is to scale that up to one billion people globally.

He and his team found that it was possible to collect a lot of actionable information for very little investment, while still protecting people’s privacy.

Although obviously enthusiastic about the technology’s potential, Halden acknowledges its shortcomings. For instance, the temperature at the monitoring site matters, as does the distance that people live from it. A signal at a monitoring site could come from a single person close to the site, or from 10,000 people farther away, he explains.

There are also ethical and moral considerations as the technology becomes more powerful. Aggregated data on populations are generally considered safe from a privacy perspective, because individuals cannot be identified. However, as analytical techniques advance, it might become possible to identify human DNA, prompting concerns about who should have access to both the technology and the data. “The moral and ethical framework has to grow, ideally before the technology is applied,” Halden says.