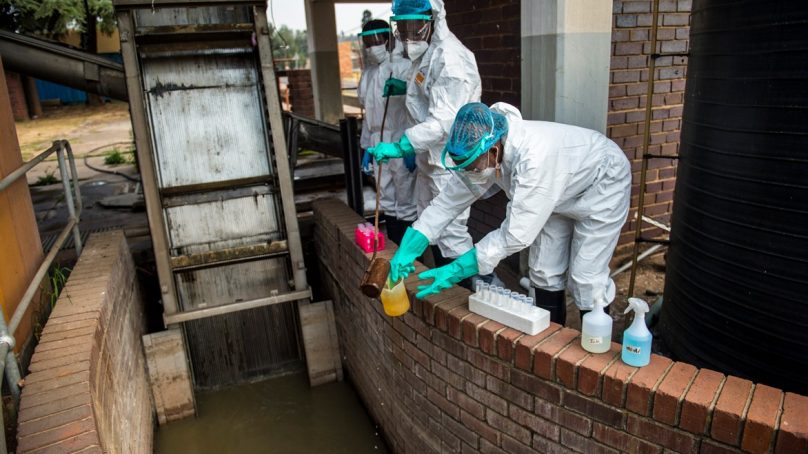 Monday is sample-collection day in Cape Town, South Africa and Aqeelah Benjamin is halfway through her shift. At the Green Point wastewater-treatment plant, under the Atlantic coast promenade, she fills a 500-millilitre bottle from a tap of untreated water. She wipes the bottle’s exterior, cleans it with a spritz of ethanol and stores it on ice.

It’s one of nine samples that Benjamin will collect today, each from a different facility. Later, she’ll drop them off at the South African Medical Research Council (SAMRC) laboratory, where they will be tested for the presence of SARS‑CoV-2, the virus that causes Covid‑19. But that’s just a fraction of the samples’ potential – waste water contains a wealth of information about public health and scientists are only just starting to tap into its potential.

Wastewater testing can provide an unbiased snapshot of community health: whatever access they have to the health-care system, everyone has to go to the toilet. And as the effluent makes its way to treatment facilities, researchers can test it to determine what pathogens might be present. For more than 40 years, researchers have used waste water to monitor the spread of poliovirus.

Norovirus, influenza, hepatitis and measles viruses can also be found in waste water. Now, a growing number of countries are using waste water to monitor the spread of Covid-19. The memorably named COVIDPoops19 Dashboard, run by researchers at the University of California, Merced, lists more than 2,200 monitoring sites in 54 countries.

South Africa is one of a handful of countries rolling out the technology nationwide. But the process isn’t easy: researchers are struggling to overcome logistical hurdles and extend the techniques to the large part of the population that has no sewerage infrastructure.

The SAMRC runs a research programme across four of South Africa’s nine provinces – the Western Cape, home of Cape Town; the rural Eastern Cape and Limpopo and Gauteng, which includes South Africa’s largest city, Johannesburg and its administrative capital, Pretoria.

After showing that it could detect SARS-CoV-2 in waste water in five treatment plants last June, the SAMRC extended the testing to another 19 plants to work out the logistics of scaling up the work.

The exercise highlighted problems specific to operating in South Africa. Difficulties collecting samples from remote sites can slow down the diagnostic process, for instance. And rolling electricity blackouts, known locally as ‘load shedding’, can hinder the operation of the equipment that samples waste water throughout the day. These machines, known as composite samplers, are also prone to theft.

Considering this, and the cost of the samplers, South African researchers tend to use ‘grab samples’, such as Benjamin’s. These samples are generally considered less representative than are those from composite samplers because they represent just a single snapshot in time. But a study by the South African Water Research Commission (WRC) has found little difference in the effectiveness of the two approaches in detecting SARS-CoV-2.

On Monday afternoon, after Benjamin and two other collectors deliver their samples to the SAMRC lab in the northern Cape Town suburb of Parow, I meet Rabia Johnson, deputy director at the SAMRC’s Biomedical Research and Innovation Platform. The lab specialises in molecular biology and cell-culture systems and has been testing waste water for SARS-CoV-2 for nearly a year.

“I think we’ve got the most comprehensive longitudinal database [in South Africa], from the first wave through the second wave,” Johnson says.

In the lab upstairs from Johnson’s office, the researchers concentrate the samples in a centrifuge and then extract any viral RNA using a kit from the molecular-reagents company Qiagen in Hilden, Germany. The kit is optimised for extracting RNA from soil rather than water, but researchers at Yale University in New Haven, Connecticut, have shown that it is better at handling the unwanted organic materials found in wastewater than are conventional techniques.

The team then moves the extracted RNA to a ‘clean’ room to test for SARS-CoV-2 to avoid the risk of contamination. The researchers use a technique called real-time quantitative polymerase chain reaction (RT-qPCR) to quantify the amount of RNA that encodes the viral nucleocapsid protein.

Other viral sequences are added in to assess performance. And positive controls are added for two key variants: 501Y.V2, first identified in South Africa and B.1.1.7, detected in the United Kingdom. A fluorescent signal indicates that the nucleocapsid RNA is present.

Finally, Johnson cleans up the data and sends them to the SAMRC’s Environment and Health Resource Unit. Researchers there upload the data to the SAMRC dashboard, a public resource launched in November 2020 that plots virus spread on a map. Around 700 people per week access the service, according to Renée Street, a senior scientist at the unit.

Because wastewater testing can capture the presence of the virus 7-14 days before the onset of symptoms, it can provide valuable early warning of localised outbreaks. Health officials can then make sure the necessary resources, equipment and personal protective equipment are available, says Johnson.

But that’s still theoretical. Wastewater data have not been used directly to inform decisions about control measures such as targeted lockdowns or resource allocation in South Africa, but they have been used alongside other sources of information, including case numbers and hospital admissions.

“It’s still very new science,” says Street. “We’re still working out what the different signals are, and at what signal level we would need to take action.”