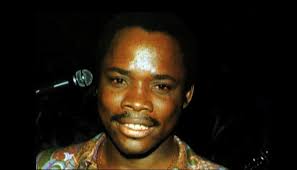 Nine years ago today, Kinshasa bade farewell to rumba legend Ndombe Opetum, the composer and songwriter whose song Nayebi Ndenge Bakolela Ngai had for nearly 30 years been the subject of intense discussion of what the composer intended to convey. It still is.

As a result, there is still a debate about whether the rumba great had a premonition about his death long before it happened.

In the philosophical composition, Opetum had “predicted” that his funeral would be a massive celebration that he would be remembered long after his death. It came to pass. In the song, Opetum besought his audience to celebrate his end, not cry as death was inevitable and no one is immune to it. Philosophical!

And exactly nine years ago, Ndombe Opetum, the star musician from DRC breathed his last in a Kinshasa hospital and reignited the debate in Kinshasa about the role an artist in society. There was consensus inspired by the theme of Nayebi Ndenge Bakolela Ngai – a call to humanity to do their best and be remembered for serving mankind through kindness and mercy – that human beings should always strive to do their best and let God to the rest. Religious!

Opetum, whose alias is Pepe Ndombe, is easily one of the biggest names in rumba music. He belongs to the second generation of Congolese artistes that was hoisted to the global stardom by the likes of Grand Kalle of African Jazz, Franco of TPOK Jazz and Franklin Boukaka – the composer Afrika, which became the African revolution and liberation anthem.

The Tabu Ley-led Afrisa International, ran into headwinds with then President Mobutu se Seseko government of Zaire over what the administration deemed the band’s failure of refusal to show up for an end-of-year concert.

Tabu Ley alias Pascal-Emmanuel Sinamoyi Tabu, better known as Tabu Ley Rochereau’s absence prompted a temporary ban from performing. It triggered an exodus of musicians, among them singer and composer Sam Mangwana, guitarists Guvano and Bokassa, among others, who left to form Festival des Maquisards.

When the ban was lifted, Tabu Ley had to recruit new musicians, among them vocalists Ndombe Opetum, Rene Kasanda and guitarists Attel Mbumba, Michelino and Lokassa Ya Mbongo.

Opetum quickly stamped his authority on the band with his own compositions that included Hortense and Longo that became instant hits. His compositions were sentimental in nature with characteristically ‘mournful’ led-guitar backup of the stylish Attel Mbumba, Faugus Izeidi and Lokassa Ya Mbongo

He also did Basi Basalaka, Alici, Aime and Mutambula that were equally popular and received considerable airplay on radio station. During his stint at Afrisa International he took part in many songs composed by fellow band members.

He was in the Tabu Ley’s group that performed at the October 3, 1970 Olympia Concert in Paris, France, after which it rebranded to Afrisa upon its return. Olympia Concert was also known as Black Sabath in recognition of the rich African culture in which rumba had a strong influence. Later in early 1972, he teamed up with two guitar wizards Dino Vangu on solo and Vata Mombassa on rhythm to form Orchestra Afrizam.

With Orchestra Afrizam, he composed Kenga, Antale Mokitani ya Hortense and Mbimba Bika besides participating as a vocalist in many more compositions – some not necessarily his own. Orchestra Afrizam rebranded to Makina Loka after a few months with a new line-up. With his new band, he did Zongisa Bolingo.

Ndombe’s destiny was kind of interwoven with that of metallic-voiced Sam Mangwana. After Maquisards, Mangwana joined TPOK and was later joined by Opetum. This was in mid-70s.

Upon joining OK Jazz, Opetum composed Voyage na Bandundu, which topped the charts for many years. It became his magnum opus. It is a solo performance that talks about his journey to Bandundu to perform with his new band – a boat journey that also took him to Mai Ndombe and other towns in eastern Zaire (now Democratic Republic Congo).

To reach Bandundu – east of Kinshasa – he travelled by boat on Ebale ya Zaire (River Zaire, now Congo). In the song, he narrates how he had to endure many challenges to answer to the call of duty – to entertain his fans and music lovers where he was born. The song features a great guitar formation made up of his former Afrisa colleagues – talented soloist Michelino Mavatiku Visi and gifted Gege Mangaya on rhythm and saxophonists Loway and Pedro.

The song – a sort of travelogue – acknowledges the risks of sailing on Ebale Ya Zaire that had in the past been overcome by other Congolese music greats. Boat journey on River Congo is kind of a pilgrimage every musician worth his name in DRC has to make as the theme has been repeated by the likes of Wenga Musica, Pepe Kalle, Grand Piza, Lipua LiPuma and even Koffi Olomide in recent years.

The boat journey, in the turbulent waters of River Congo from Kinshasa to Bandundu, through the timber town of Nioki (Mboka Mabaya) is figurative as it signifies Opetum’s journey from Afrisa to TPOK Jazz, as he sums it up by narrating how Vicky Longomba and Brazzos travelled the same route.

In the early 1980s the unsettled Opetum left TPOK to team up with Loway, with whom he had shared a stage when they were in Afrisa and later TPOK. Together, with Sam Mangwana and other rebels from TPOK, they formed Tiers Monde, an outfit that was short-lived.

Like the biblical incorrigible son, Opetum returned to TPOK and Franco welcomed him back with both hands. Opetum went on to compose the popular Angela and Tawaba, which featured Dizzy Mandjeku on solo, Kiambukuta and Lutumba Simaro on vocals. Even after the death of Franco, he remained with Bana OK after TPOK disbanded in 1993. He made a remarkable contribution to the Bana OK’s repertoire in the late 90s before the TPOK offshoot went quiet.

His song Nayebi Ndenge Bakolela Ngai, which he composed and recordedin the mid-80s literally translates to: I know how they will mourn me when I die. In the song, Opetum “had” a premotion about his death. He “predicted” that it would be a celebration that would bring the capital Kinshasa to a standstill because the country would be honouring a legend (of Lingala music).

Indeed, his funeral was a celebration to behold as it brought Kinshasa to a halt and the song dominated the airwaves during the period.

Opetum who would have been 77 years old this year, was born in Bandundu in DRC. As one writer, observed, despite the enormous deposits of minerals, Congo’s leading export is music.

The philosopher may have died, but his philosophy lives – Liwa ekomi moto te. Life is not a rehearsal!