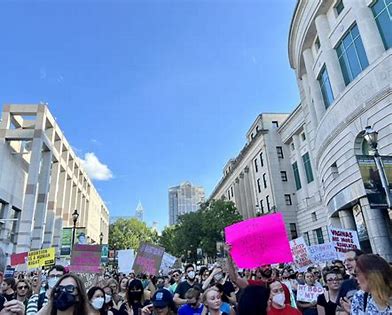 In a scathing joint dissent, Supreme Court Justices Sonia Sotomayor, Elena Kagan and Stephen Breyer declared that the nullification of the constitutional right to abortion last week was a catastrophic decision not just for American civil liberties, but also for the legitimacy of the court itself.

“In overruling Roe and Casey,” they wrote, “this court betrays its guiding principles.”

Warnings of the Supreme Court’s declining institutional credibility are hardly new, dating back at least to the court’s intervention in the 2000 presidential election, which Justice John Paul Stevens said in his dissent had wounded “the nation’s confidence in the judge as an impartial guardian of the rule of law.”

But the rhetoric of delegitimisation has intensified and moved well beyond the bench, increasingly deployed by Democratic politicians and commentators alike. What exactly does it mean for the Supreme Court to experience a crisis of legitimacy, and is it really in one? Here’s what people are saying.

What makes a court illegitimate?

Accusations that the Supreme Court has gone “rogue” are often another way of saying that it has tacked too far to the right of public opinion. Polling conducted over the past week has shown that a majority of Americans disapprove of Roe’s overturning. The divergence is even more striking with respect to another decision the court made last week to strike down a New York law that placed strict limits on carrying guns outside the home, effectively establishing a broad right to be armed in public. According to a June poll, 79 per cent of New Yorkers wanted the law upheld.

Critics of the court also contend that its right-wing majority is intellectually corrupt, employing disingenuous legal reasoning to cloak a reactionary political agenda. The court’s conservatives purport to be merely interpreting the Constitution with deference to the intentions of the framers and, as Justice Samuel Alito wrote in the decision overturning Roe, rights that are “deeply rooted in this Nation’s history and tradition.”

Taken seriously, that description would seem to threaten a broad range of privacy rights not explicitly mentioned in the Constitution — including, for example, the rights to contraception and same-sex marriage. But Alito would not go so far: Abortion, he said, was categorically different from those other rights.

In the decision striking down New York’s gun law, Justice Clarence Thomas also claimed the high ground of history, arguing that only gun regulations that are “consistent with this nation’s historical tradition of firearm regulation” should be allowed to stand. But as Saul Cornell points out in Slate, states have been regulating guns for well over a hundred years, suggesting “that the conservative wing of the court is not sincerely interested in history, text and tradition if the evidence cuts against them.”

These apparent contradictions are remarkable only “if you assume that the right-wing majority’s intention is to consistently apply legal principles rather than to translate right-wing cultural identity into law,” Adam Serwer argues in The Atlantic. “The majority’s supposed originalism is a means to affirm novel legal interpretations grounded in present-day right-wing grudges as what the Constitution demanded all along.”

Another often-cited piece of evidence for the court’s legitimacy crisis is the “politicisation” of the confirmation process. Many court watchers say that the process became increasingly ideological and divisive after Robert Bork’s and Clarence Thomas’s nominations in 1987 and 1991.

In an April article, the political scientists Miles Armaly and Elizabeth Lane argued that the trend accelerated in 2016, when Senator Mitch McConnell blocked President Barack Obama’s appointment of Merrick Garland. Then came Justice Brett Kavanaugh’s explosive hearing in 2018 and, most recently, the hasty effort by Senate Republicans to fill a vacant seat (Justice Ruth Bader Ginsburg’s) just weeks before a presidential election, despite McConnell’s refusal to do so four years earlier.

In survey research Armaly and Lane conducted, they found that McConnell’s rush to fill the position with a Trump nominee (Justice Amy Coney Barrett) decreased Democratic voters’ support for the court without improving it among Republicans.

“If the new norm of contentious, politicised hearings continues, the Court’s legitimacy may increasingly be threatened,” they wrote. “This is bad news for the Court, which relies on the public’s support for the enactment and enforcement of their decisions.”

And sure enough, even before the abortion and gun rulings came down last week, only 25 percent of Americans said they had confidence in the court, down from 36 percent in 2021.