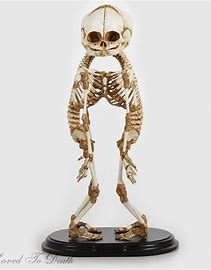 At the height of the French Revolution in the late 1700s, a boy sat on the steps of the Notre-Dame cathedral playing a lilting tune on his wooden recorder.

Parisians hurried by, occasionally casting a glance towards the child, perhaps throwing a few coins his way.

But what may have caused them to stop mid-stride was the sight of his legs – or, rather, leg. The boy’s two thighs were fused at his knee and his leg ended in a single foot.

Science Friction breathes life into the bones of an ancient medical curiosity … and investigates the story of a child lost in time.

More than 200 years on and half a world away, his skeleton – a bit over 70 centimetres tall, perched on a pedestal, still grasping his wooden recorder – sits on a shelf in a storage room underneath the University of Melbourne’s Harry Brookes Allen Museum of Anatomy and Pathology.

But the vivid, lively story of the “flute boy’s” life – that he was a beggar who played his wooden flute in revolutionary Paris to the delight of passers-by – is in contrast to a much darker, ethically dubious history of human anatomical specimens.

It details nearly 50 medical case histories, such as fractures and tumours, starting at the head and descending anatomically from there.

Michelangelo drew and sold anatomical drawings such as this one, which shows muscles of the left leg, bones and muscles of the right leg, and a kneecap in between.

The Greeks, too, wrote many anatomical texts. They also started what’s thought to be the first school of anatomy roughly 2,300 years ago.

But the study of anatomy really took off in Europe in the 1600s and 1700s. Anatomists dissected human bodies and, thanks to the printing press, anatomical drawings – some by famous artists such as Michelangelo – could be published and disseminated.

Along with highly detailed illustrations came a demand for physical specimens. But these weren’t the classic skeletons you might see in classrooms today, suspended from the top of the head with arms and legs dangling.

They were needed for dissection and display, especially the more out-there examples, where people lived with extreme physical disabilities or conditions.

Most of what we know about the flute boy’s life is relayed in an 1868 paper written by the man who brought the skeleton to Melbourne, says Anneliese Milk, who researched the specimen’s history as part of a master of art curatorship in 2013 and 2014.

The man was George Halford who, in the mid-1800s, was considered one of the most promising anatomists and physiologists in England.

In 1862, he accepted a job at the University of Melbourne – an institution then only eight years old – to be its first professor of anatomy, physiology and pathology.

When George Halford moved to Melbourne, he brought books, anatomical specimens and a decent set of mutton-chops with him.

“And just prior to him leaving the UK for Australia, he was given a cheque for 500 pounds, with the idea of purchasing books for a library and specimens for the establishment of a museum,” Ms Milk says.

“That’s when he would have purchased the skeleton.”

Yet despite anatomy’s popularity at the time, strict laws in the UK forbade the preparation of local anatomical specimens.

Under the Murder Act of 1752, UK anatomists and surgeons could only access bodies of executed murderers.

But across the channel, those laws were more relaxed. As well as executed criminals, French anatomists could dissect unclaimed bodies from, for instance, psychiatric and charitable hospitals, Ms Milk says.

So, Prof Halford went through a London-based dealer who specialised in sourcing prepared skeletons. A prolific anatomist named Jean-Joseph Sue prepared the skeleton some years earlier and his family sold it to the London dealer in 1862.

“It’s not surprising that a pathological specimen like the flute boy was purchased from France, because at the time, it was more affordable, and otherwise illegal to do that in the UK,” Ms Milk says.

Of course, the law did not stop less scrupulous physicians in the UK from paying body snatchers for fresh corpses dug from graveyards, or – in some cases – people who were killed specifically to be sold.

So to quash the bodysnatching trade and give the UK a leg-up in advances in anatomy – in which it was lagging behind the rest of Europe – the Anatomy Act was passed in 1832.

This gave doctors and medical students in the UK free licence to dissect donated corpses.

As human remains were collected and sold around the world, a market emerged for more severe examples of disease and injury. And not just as teaching tools, either. They were often bought by the wealthy and proudly displayed in their home.

The flute boy was, without doubt, built to attract attention. Everything about him – his skull, jauntily cocked to the side, arms holding his recorder to his mouth and that fused leg – catches the eye.

Even his seat is intriguing: a carved wooden pedestal that could have come from an ornate piece of furniture. You can picture him sitting on someone’s mantlepiece.

But is he all he seems to be? The skeleton, held together by nails and wire and patched with plaster and papier mache, is coated in a thick layer of brown varnish.