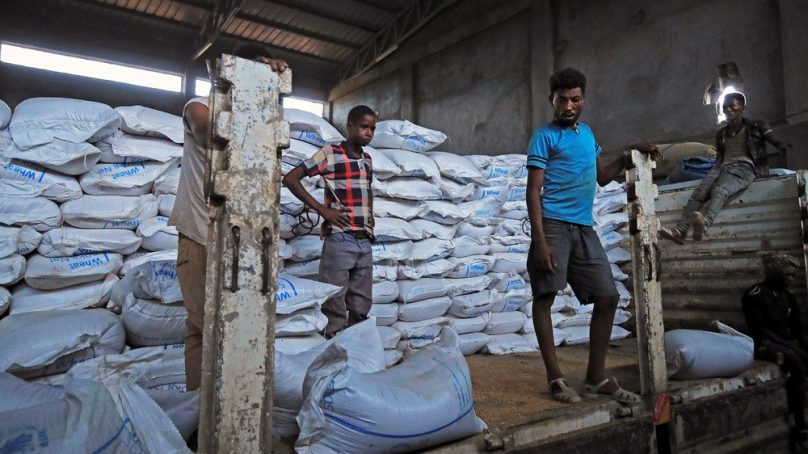 Ethiopian government accusations that aid agencies are supporting rebel forces in Tigray have left international relief organisations concerned for the security of frontline staff, even as conflict escalates and hundreds of thousands of people face famine.

He also threatened to expel staff members of the agencies.

The conflict in Ethiopia’s northern Tigray region has uprooted about two million people, disrupted farming and jobs, and destroyed schools, water points, and health clinics. Almost all the region’s five million people need some kind of humanitarian assistance, according to the UN. Some have fled to neighbouring regions and to Sudan.

More than 50 aid groups – including UN agencies, NGOs, and local organisations – are currently responding to the crisis. They have collectively requested just over $850 million to meet humanitarian needs through the year.

In private, several of the aid agencies contacted by The New Humanitarian deny the government’s allegations, but none were willing to comment publicly, citing a tense political and security situation in the country.

“Once you associate the NGOs with the enemy, it removes any moral obstacle to attacking them,” said Abby Stoddard, of the consultancy group Humanitarian Outcomes, which provides research and policy advice for aid agencies.

Nearly a month ago, three Tigray-based humanitarian workers from Médecins Sans Frontières were murdered – among 12 aid workers killed since the conflict began in November 2020.

Stoddard said that, while governments often grumble about aid agencies in civil wars, this was the most public and direct allegation she could recall in recent years, and could fuel further attacks against aid workers.

“It would be bad enough if a random person tweeted it, but this is coming from the government,” said Stoddard, who has authored a book on aid worker security in warzones.

A senior aid official familiar with the relief operations in Ethiopia added that the announcement would lead to an “atmosphere of increased hostility” against humanitarian groups and would be used to justify a continued blockade of aid to Tigray.

Other aid workers say understanding the allegations of aid agency misbehaviour is difficult when the government has not provided details of its claims.

Stefan De Keersmaecker, a spokesperson for the EU, which funds aid agencies in Tigray, did not comment on the specific allegations but said agencies undergo a due diligence assessment prior to the disbursement of funds and face “regular checks” during project implementation.

A spokesperson for USAID – another major donor to the relief operation – said the agency takes “seriously” any allegation of assistance being diverted but added, “These types of statements can increase the danger to humanitarians who are risking their lives to help others. Anything that further hinders humanitarians from doing their job saving lives is deeply concerning and will only exacerbate an already dire situation.”

Hussein’s comments come amid a deterioration in the eight-month conflict, which pits Ethiopia’s central government against the Tigray Defence Forces (TDF) – an armed offshoot of the regional ruling party: the Tigray People’s Liberation Front.

The TDF has expanded its operations in recent days – including into neighbouring regions – and the government has begun drafting militias from across Ethiopia’s ethnically-based regions to help combat the group.

Mohamed Kheir Omer, a political analyst following the conflict, said the militias are likely to struggle against the TDF but that the civilian fallout will be high. “I think it will be catastrophic in terms of human suffering,” he said.

Military operations to quell the TPLF’s rebellion have been accompanied by numerous civilian massacres, looting, and other human rights abuses amidst a worsening food situation.

After heavy fighting with the rebels, Ethiopian Prime Minister Abiy Ahmed withdrew the national army on June 28 and the TPLF took over. The central government declared a humanitarian ceasefire but largely cut off Tigray from electricity, telecommunications, banking and trade, while restricting the road access of humanitarian organisations.

Only a few dozen international aid trucks have reached the region since the change in control. The second of two UN passenger flights was due in Tigray today. After the successful arrival of about 50 trucks across the front line earlier this month, a second aid convoy was attacked by unknown forces on 18 July and did not reach Tigray.

The UN’s World Food Programme, or WFP, says about 100 trucks a day are now needed to supply food, fuel and other relief supplies across the front line for up to five million people.

Addis Ababa denies charges it is hampering relief deliveries as a form of collective punishment, countering that the TPLF is pursuing military objectives rather than attending to humanitarian needs. In a new claim today, the government also alleged that the TPLF will prevent households from getting assistance unless “they send their children to fight”.

The accusation by Hussein, the government official, is not the first-time agencies have been accused of favouring the TDF during the conflict: Abiy previously implied that aid supplies offer a strategic benefit to the rebels.

The prime minister said relief supplies had strengthened and financed the TPLF and enabled arms purchases when it fought the central government in the 1980s – claims supported by a 2010 BBC investigation.

The government has repeatedly said that foreign diplomatic pressure – from the US, the EU, and the UN – and international media coverage has been one-sided and has downplayed the TPLF’s role in triggering the conflict, and subsequent human rights abuses.

The WFP, meanwhile, issued a public rebuttal last week after a report by the independent pro-government news service ESAT accused the agency of supporting rebels. The UN’s food aid agency declined a request to discuss the allegations and reporting made against it.

A photo of a WFP staffer next to a TPLF official talking on a satellite phone had been widely circulated online as purported evidence of technical support to the rebels. The WFP statement said it is obliged to speak to all parties in a conflict.

Aid organisations are also facing “continuous and systematic negative rhetoric” on social media, according to an NGO official monitoring the crisis.

The New Humanitarian has collected dozens of examples of social media accounts calling for NGOs to be expelled from the country, and making unfounded allegations that the UN and foreign NGOs are helping the TPLF. Aid workers are regularly called spies and terrorists, accused of having “hidden agenda”, making “fake news” and being “colonisers”.

The donor countries are not spared. One tweet shows a doctored image of USAID chief Samantha Power appearing to brandish an AK-47 rifle.

​​As tensions rise, Stoddard, of Humanitarian Outcomes, said donor governments should come together to denounce the allegations and “reaffirm the neutrality and impartiality of international aid operations.”

‘I’m sorry, but it’s too late’: Doctor tells of how emotionally it’s taxing to care for someone who’d have prevented Covid