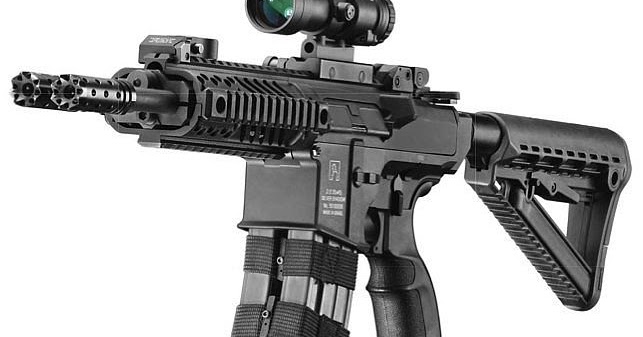 The Tanzania People’s Defence Force (TPDF) has taken into service an unusual weapon in the form of the Israeli Gilboa DBR Snake double-barrel assault rifle.

This was seen during a parade on January 12 to mark the anniversary of the 1964 Zanzibar Revolution. Janes reports that the TPDF is the first military known to use such a weapon, with the type in service with the TPDF’s special forces, every member of the roughly 50-strong unit seen on January 12 were carrying the rifle.

The Gilboa DBR Snake is made by Israel’s Silver Shadow, and combines two 5.56mm AR-15-type rifles into a single weapon, fed by two standard magazines. Both barrels fire when the single trigger is pulled (the civilian model has two triggers). Although the military and law enforcement are the weapon’s primary markets, it is also available commercially.

The idea behind the weapon is to provide a rapid burst of fire to increase hit probability and faster target incapacitation for a single trigger pull. Over the decades, several multi-barrel automatic rifles have been developed and tested but not made it to production.

The military version of the Gilboa Snake has a single trigger and three-position safety or fire selector, which allows for single “double taps” and for fully automatic fire (also simultaneously from each barrel). Weight is under five kilogramme without magazines.

Tanzania has been acquiring a wide variety of military hardware in recent times, some of which was displayed during the country’s Independence Day parade on December 9 last year. This included a Chinese Norinco VT2 main battle tank (MBT). The VT2 is the export version of the Type-96A, which is in use with the Chinese People’s Liberation Army.

The Independence Day parade included several examples of the Type 63A light amphibious tank, an upgrade to the Type 63 that introduces a 105 mm main gun, and a single SCORPION tracked reconnaissance vehicle. Tanzania already operates the Type-59G from China, and a number of FV101s from the UK.

Tanzania has acquired a substantial amount of military hardware from China. A decade ago, Type 63A amphibious tanks, A100 multiple rocket launchers and Type 07PA self-propelled mortars were displayed for the first time.