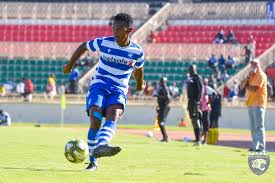 AFC Leopards SC assistant coach, who doubles up as chief operating officer Tom Juma reveals in an interview with Tell Television that President Kenyatta follows the team and gets disappointed when it is not performing.

The president told the team during a visit to State House that he grew up as diehard fan of AFC Leopards during the years it was the biggest and most feared football club in East and Central Africa.

The president still follows the team to this day despite the financial and management challenges it is going through.

Last year, president Kenyatta visited the team to State House and urged them restore the reputation it had in the 1970s through the 1990s. the president is always surprised that AFC Leopards do go to the stadium to support the team, which depends on get collections to pay players, technical bench and other staff.

In the interview, ‘Gaza’ or TJ as the assistant coach is known to adoring fans, reveals that the FIFA ban that prevented the team from signing new players is now behind them and they are looking forward to beefing up the squad in the January transfer window after 18 first-team players quit for various reasons.

The club promoted the youth team, which has posted mixed results in the current season.

The club is in the process of signing two strikers, a midfielder, two centre-backs, left fullback and probably a goalkeeper. He said the new players should be available for selection once they are cleared by the interim caretaker committee put together by Sports Cabinet secretary Amina Mohammed.

TJ says the technical bench is confident AFC Leopards will finish in the top five, and has a realist chance of winning the league. Welcome viewers.