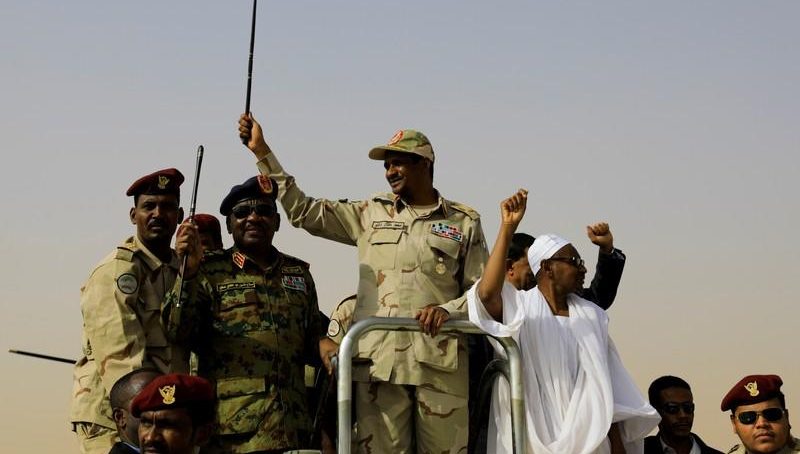 Sudan’s military rulers last week announced an emergency committee to address the country’s collapsing economy and pointed to its gold mining as a possible boost.

Sudan’s ambassador to Russia has denied reports that Moscow has been smuggling gold from Sudan in preparation for sanctions over its invasion of Ukraine. But Sudanese analysts say gold smuggling is rampant, including to Russia.

The report came after Hemeti gave a rare press statement this week on efforts to prevent the country’s economic collapse.

Sudan’s exports dropped 85% in January and prices for everything are quickly rising — one of the main sparks for the 2019 uprising that led the military to oust former president Omar al-Bashir.

In remarks to media Monday, Hemeti announced an economic emergency committee to address the issues. Among other measures, he pointed to Sudan’s gold mining, which amounts to at least 50 tons per year, as a potential solution.

Hemeti says one of the most important resources that can help boost Sudan’s economy is the gold. He says security forces have arrested a lot of people smuggling gold, 40 buyers in all. He says the buyers are not the problem and asks, from whom are they buying this gold? That’s the question, he says, adding, “We will find out.”

Hemeti gave no details on the nationalities of those arrested, the timing, or who was suspected of buying how much smuggled gold.

His comments came just days after a report in the British Telegraph newspaper said Russia prepared for sanctions over its Ukraine invasion by buying smuggled Sudanese gold.

Hemeti didn’t comment on the allegation in his remarks.

Late last month, Hemeti began a week-long visit to Moscow as much of the world was criticizing Russia for preparing to invade its neighbor.

The Kremlin’s invasion began as Hemeti met with Russian officials to discuss expanding and strengthening cooperation with Sudan.

But in a written response to VOA through a messaging application, Sudan’s acting ambassador to Russia Onor Ahmed Onor dismissed the claims.

“I have nothing to say other than it is fake news and a story created from the imagination of the Telegraph reporter,” read the text.

Analysts say the RSF is itself involved in gold smuggling.

“Russia surely obtained gold from several sources, not only Sudan,” he said. “But, yes, Sudan is one of the countries that the Russian companies managed to benefit from with secret agreements with the RSF and other entities like the former ruling National Congress Party. Russia, like many countries, benefited from smuggling Sudanese gold.”

The RSF office refused to take a call from VOA seeking comment on the allegations.

A spokesman at Sudan’s Ministry of Minerals confirmed to VOA that two Russian gold mining companies are operating in the country — Elianze and Meroe Gold, a subsidiary of M-Invest.

But the ministry’s spokesman would not comment on allegations of gold smuggling.

A 2019 report by CNN says M-Invest, a Russian company linked to the Kremlin and Russian mercenaries, was heavily involved in smuggling gold out of Sudan.

CNN reported in 2019 that M-Invest, a mining company the US says is owned by Russian President Vladimir Putin’s ally, Yevgeny Prigozhin, also advised Sudanese authorities how to quash public protests.

Authorities say Prigozhin is behind the Wagner Group of Russian mercenaries that UN experts have accused of human rights abuses from Syria to Libya to the Central African Republic.

While it’s not clear to what extent the Russian companies are still involved in Sudan’s gold mining, analysts say most of it has been off the books.

Sanhori Eissa, the former head of economics at Sudan’s largest newspaper Al-Rayaam, says exporting Sudan’s gold to Russia remains a smuggling operation, as is the case with nine other neighbouring countries of Sudan.

“The export is probably done through the United Arab Emirates [UAE], through Khartoum international airport. The only outlet is the UAE, where Sudan’s [smuggled] gold gets refined and stamped as an emirate product then [re-]exported,” he said.

It was not possible to independently verify Eissa’s claims. Sudan was headed for international relief from lenders but was cut off from foreign assistance after an October military coup overthrew the transitional government formed after Bashir’s ouster.

Since the coup, ongoing street protests against military rule have left at least 85 people dead.