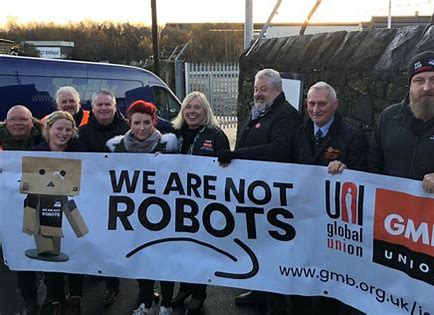 Last week, workers at an Amazon warehouse on Staten Island delivered one of the biggest victories for organised labour in a generation when they voted to form a union – the first such organising effort to succeed at any Amazon worksite in the United States and a stunning upset for a world-straddling corporate giant long criticised for its coercive labour practices.

The win was all the more striking for arriving at an otherwise bleak moment in the history of the American labour movement: Last year, the share of workers in unions dropped to 10.3 per cent, down half a percentage point from 2020 and the lowest rate in decades.

Is the Amazon victory a potential sign of that trend’s reversal, or an exception that proves the rule of workers’ waning power? Here’s what people are saying.

As Alex Press writes in Jacobin, the Amazon Labour Union’s success “goes against much of what passes as common sense within the labour movement.” Conventionally, people looking to organise their workplaces tend to join already established unions so that they can take advantage of their institutional knowledge and financial and legal resources. (Those resources can be particularly useful against a company like Amazon, which spent more than $4.3 million just on anti-union consultants nationwide last year.)

That’s the approach organisers took last year in Bessemer, Alabama, where Amazon workers overwhelmingly rejected a vote to join a national retail union founded in 1937. (After concluding that Amazon violated election labour laws, the National Labour Relations Board mandated a revote that is still in progress.)

The ALU, however, is completely independent. It was started by Christian Smalls, a former Amazon employee, and his co-worker Derrick Palmer. When Smalls planned a walkout over the warehouse’s safety conditions at the beginning of the pandemic, the company fired him and accidentally leaked a public relations strategy to smear him as “not smart, or articulate.”

After he was forced out, Smalls, Palmer and a group of colleagues spent $120,000 that they raised through GoFundMe on the union effort.

In addition to striking out on their own, ALU leaders decided to buck traditional organising methods. Professional union strategists, such as Jane McAlevey, often argue that successful union campaigns require visits to workers’ homes so that conversations can be heard without employer supervision. They also stress the need to persuade a supermajority of workers – typically 70 per cent or more – to sign authorisation cards, which often function as a preliminary statement of interest in union membership before an official election.

The ALU, on the other hand, filed for an election with authorisation cards from just 30 per cent of eligible workers, the legal minimum. And instead of doing house calls, Smalls, Palmer and their fellow organisers built bonfires at a bus stop outside the warehouse to warm colleagues waiting to go home, made TikTok videos to reach workers across the city and held barbecues with signs that read “Free Weed and Food.”

“This is an astounding result,” John Logan, a professor of labour studies at San Francisco State University, told Vice. “Amazon is the most important company in the global economy and it’s the most fearsome anti-union company in terms of its wealth, sophistication and its efforts to keep unions out. With ALU, it also does seem to turn all of the conventional organising wisdom on its head. They did it without a huge union or experienced organisers.”

In the view of Steven Greenhouse, a labour journalist and former Times reporter, the advantage of this “worker to worker” model is that it neutralizes mistrust – whether instinctive or actively cultivated by the employer as a union-busting tactic – of unions as bureaucratic, unaccountable third parties.

Instead, workers “feel that they’re choosing between their employer and an energised, concerned group of co-workers and friends that is eager to build a better workplace,” he writes in The Atlantic. “For many workers, that makes voting for the union a no-brainer.”

Sara Nelson, the head of the flight attendants’ union, also sees promise in this model: The future of American unionizing efforts “can’t be about people coming in from the outside with an organizing plan that people have to follow,” she told The Times. “It has to come from within the workplace.”

Broader dissatisfaction with the economy could make workers even more receptive to the idea of unionising. As The Times’s Noam Scheiber has reported, many workers are resentful about being deemed “essential” during the pandemic, only to be treated as disposable. And while wages are rising at a faster clip than they have in previous years, thanks to a tighter labour market, they have not kept pace with inflation.

“When workers feel squeezed or that their household budgets are squeezed while the companies, they work for are so profitable, that can create agitation and energy toward organizing,” Rebecca Givan, an associate professor of labour studies at Rutgers University, told The Washington Post.

History shows that labour mobilisation can be a self-reinforcing trend. “Sometimes, a single victory can spark a wave of victories,” Harold Meyerson writes in The American Prospect. “That’s what happened in 1937, as the great UAW sit-down strike, occupying General Motors’ Flint, Michigan, factories, won them a contract with GM and inspired dozens of similar campaigns and hundreds of successful unioniSation campaigns across the land.”

Potential signs of this phenomenon can be seen in the Starbucks union drive, which notched its first victory in December of last year and has since spread to more than 100 locations. If workers at other Amazon facilities decide to unionise, they will have a larger platform on which to speak out about the company’s labour practices, which might in turn spur pro-union sentiment at Amazon and beyond.

“Workers everywhere and the general public everywhere saw Amazon as the unorganisable,” Kate Bronfenbrenner, a senior lecturer at Cornell University who studies labour organising, told The Wall Street Journal. “This just explodes that and says that no company is invincible.”

According to Gabriel Winant, a labour historian at the University of Chicago, ALU’s win “suggests that there’s just more appetite out there for organisation than there has been in a long time.” But, he added, a single victory is not a guarantee of a sea change.

One reason worker unrest may not translate into successful organising is that it’s still very difficult to unionise in the United States, as my colleague Binyamin Appelbaum writes.

Tellingly, Appelbaum notes, the share of workers who would like to be in unions far exceeds the share of workers who actually are in one. Why the discrepancy? Since collective bargaining was legalised in the 1930s, Congress has worked to constrain American unions more tightly than have other democracies, granting employers wide latitude to intimidate their workers.

The House passed legislation last year designed to loosen these constraints, but it died in the Senate, and bolder reforms, such as sectoral bargaining, remain politically unimaginable. “As in the early 20th century, the union movement may well have no option but to win on a tilted field in order to have a fair chance,” Appelbaum writes.

In the medium term, workers may also lose some of the leverage they’ve gained from a tight labour market. Because of concerns about inflation, which is climbing at its fastest pace in 40 years, the Federal Reserve began raising short-term interest rates in March and has suggested it may further increase rates by half a percentage point starting in May – twice the usual increase – until they’ve risen 2.5 percentage points by the end of the year.

For labour organising, then, a pertinent question is, “How long are we in this period where workers feel like they can quit their job and go get a better one without much hassle?” Michael R. Strain, the director of economic policy studies at the American Enterprise Institute, told The Washington Post. His prediction: “not much longer.”

Whether the ALU victory was indeed a fluke or the first ripple of a new wave in American labour organising might become clearer when workers at a smaller Staten Island Amazon complex, LDJ5, vote in a union election scheduled to run from April 25 to May 2.