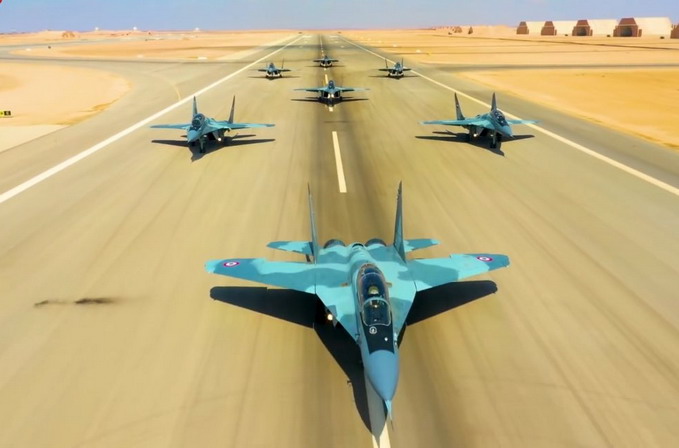 The wide-ranging sanctions will have serious implications for Africa, especially the continent’s ability to procure and maintain military hardware from Russia.

Russia, along with the four largest exporters of major arms to the continent – the US France, Germany, and China – accounted for 76 per cent of major arms exports between 2016 and 2020.

Almost half of Africa’s imports of military equipment (49 per cent) come from Russia. These include major arms (battle tanks, warships, fighter aircraft and combat helicopters) and small arms (pistols and assault rifles such as the new Kalashnikov AK-200 series rifle). By comparison, China accounts for 13 per cent of the continent’s arms imports.

The biggest buyers of armaments from Russia – and most long-standing importers – are Algeria, Angola, Burkina Faso, Egypt, Ethiopia, Morocco and Uganda.

Following the invasion of Ukraine, NATO imposed comprehensive sanctions on Russia to cripple its ability to participate meaningfully in the global economy.

Western countries led by the United States and the European union have further excluded the Bank for International Settlements, including SWIFT which facilitates cross-border money transfers messaging, from global trade.

Egypt and Algeria are in the top ten list of major importers in the world. Egypt accounts for 5.8 per cent of arms imports globally, and Algeria for 4.3 per cent. According to the Stockholm International Peace Research Institute yearbook 2021, the global arms trade in 2019 alone was estimated at US$118 billion.

Russia commanded 20 per cent of the market share in Africa, second only to the US (37 per cent). France accounted for 8.2 per cent, Germany 5.5 per cent and China 5.2 per cent.

At 7.3 per cent Africa is not a significant importer of major arms compared to Asia and Oceania (42 per cent), Middle East (33 per cent) and Europe (12 per cent).

Russia has capitalised its close ties with many African countries based on its historical links with the continent since the days of the Soviet Union and the Cold War. This has enabled it to negotiate arms deals with relative ease. In addition, its pricing structure and lack of political conditionalities, such as human rights sensitivities, make its arms sales attractive and affordable.

Russia’s suspension from global financial systems will disrupt these sales. This presents both risks and opportunities for the continent. The risks include insecurity of supply of essential spares, disruption of the operational and training plans for the defence forces that are using Russian equipment, and high cost of sustaining equipment already deployed in operations.

But the prevailing situation also presents an opportunity for African countries to turn to their own defence industry capabilities to fill the gap.

The sanctions have a few practical defence industry implications for African countries.

The first is that current orders of military hardware from Russia can no longer be fulfilled.

The second is that repairing, maintaining or overhauling existing Russian-made hardware will be hard, if not impossible. This is because essential spares, tools and certification cannot be provided.

Linked to this is the fact that specialists from the Original Equipment Manufacturers, which are the original designers, developers and manufacturers of the military equipment concerned, will not be able to fly from Russia to support the equipment.

Third, contractual obligations, including financial and performance obligations, won’t be able to be fulfilled. This implies that neither Russia nor African countries could be held liable for breaching contracts, as it is impossible to perform, even if they wanted to.

Fourth, the void created by Russia’s suspension from global trade will have to be filled by alternative suppliers.

In the past Russia has been astute in filling the void left by western countries. It did this in 2013 when the US cut off military aid and arms to Egypt after the military staged a coup. Suppliers such as Russia and France were happy to fill the gap.

Similarly, in 2014 when the US cancelled a contract for fighter helicopters with Nigeria over human rights violations Russia stepped in to supply the country with Mi-35M attack helicopters.

Lastly, the disruption in the supply value chain due to the sanctions could facilitate and promote a huge black market in arms transfers. This may be difficult to reverse even after the end of Russia’s war in Ukraine.

As African countries cease to transact openly with Russia on defence hardware and services, the black market is likely to flourish. This would reverse the gains made by the United Nations Office for Disarmament Affairs’ Programme of Action and the African Union’s strategy on illicit arms transfers.

Many small and light weapons, such as the NATO-standard M16 and M4 assault rifles, sniper rifles, machine guns and pistols, flooded the black market after the withdrawal of the US from Iraq and Afghanistan.

There’s a real danger of black-market arms transactions, involving both state and non-state actors, becoming entrenched on the continent.

The demand for military hardware and services will continue despite the exit or suspension of Russia’s participation. This presents an ideal opportunity for African countries to consolidate and align their defence industry capabilities for sustainability. Through collaboration, defence industry companies in Africa will be able to retain skilled workforces (engineers and technicians), invest in research and development and remain competitive in the global marketplace.

Russian-made equipment can still be maintained and supported by indigenous African defence industry experts. Countries such as South Africa, Egypt, Nigeria and Algeria have credible local defence industries that, collectively, could manage to fill the void left by Russia.

It may also be advisable to engage Russia, through diplomatic channels, for the transfer of maintenance contracts to African defence industry companies. For instance, there are at least 80 Russian-made MiG-29 fighter jets in Algeria, Chad, Eritrea and Sudan, while Egypt has at least 46 of the upgraded variants of the same aircraft.

These aircraft and other military hardware for the land and sea capabilities require reliable maintenance service providers, preferably located in Africa.

Being members of the African Union, it will be much easier to address contractual challenges from within the continental body than when confronted by restrictions that may be imposed from outside the continent.

The comprehensive sanctions imposed on Russia are likely to last beyond the current conflict. This implies that what may be regarded as “interim measures” to fill a temporary void may end up being a long-lasting solution to Africa’s desire to produce its own military hardware for its own use and also to reduce reliance on external suppliers.

African countries should therefore make a concerted effort to look towards defence companies on the continent for support. The African Union and South Africa, in particular, given its BRICS link, should play a central role in driving such a campaign.