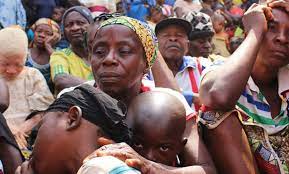 The increased number of prisoners of conscience in the world has been linked to proliferation of surveillance technology. Aware of the dangers posed to the right to privacy and association, human rights lawyer and freedom of expression crusader Eitay Mack is pushing for transparency in the Israeli war industry.

In an opinion published in leading Israeli Haaretz newspaper, Mr Mack argues, with examples in the Middle East, Asia and Africa – specifically Cameroon – that the war or security industry is an impediment to the enjoyment of human rights, right to information and the fight against corruption, tyranny and crime.

He writes, “Vietnam is now among the biggest jailers of activists in Southeast Asia. Today, Vietnam ‘boasts’ at least 276 prisoners of conscience. Although Vietnam has signed and ratified the Universal Declaration of Human Rights and the International Covenant on Civil and Political Rights, the regime has punished those who peacefully exercise the rights to freedom of expression, association and assembly, to access to information and a free press as well as the right to freedom of religion and belief.”

He argues that these violations are abetted by the Israeli war industry that revolves around surveillance technology Peagus, NSO Group and Cellebrite. The Committee to Protect Journalists (CPJ) spoke to Mack and in the following – second – instalment of the interview he talks about how the whole industry is shrouded in mystery.

Israeli surveillance gadget maker NSO Group told CPJ that it uses a “kill switch” to shut down its systems in cases of serious misuse. However, as CPJ and other groups noted in a public letter to the company in April 2021, the company has been vague about how it terminates relationships with clients.

Another company, Cellebrite, told CPJ that its platform “enables selective extraction of major types of digital sources, preservation, analysis and reporting of evidence to accelerate criminal cases” and that its tools are “designed to limit the analysis to only data that might be relevant to the case.”

Cellebrite has attracted scrutiny because it is preparing to go public on the New York stock exchange.

CPJ interviewed Israeli lawyer Eitay Mack who is pushing surveillance apps makers to be transparent in the business they are doing with governments and intelligence communities around the world.

CPJ: Could that trigger a public relations crisis?

Mack: It will be an interesting development [if and when that happens] because it can bring more normalisation to the companies. That could push companies to be more transparent, but I don’t think investors outside Israel understand the risk of being 100 per cent dependent on the Israeli government. If the company can’t get an export licence, it’s finished. And investors won’t know what the company is doing. They will read [about] it in the newspaper.

Editor’s note: In response to CPJ’s questions about Mack’s remarks, Betty Ilovici, the foreign press advisor of the ministry of defence, said in a statement via email on behalf of the ministry that the Defence Export Controls Agency supervises exports of dual use cyber defence products in line with Israel’s Defence Export Control Law and international regulatory regimes and with oversight from Israeli courts and the Knesset. “Human rights, policy and security issues are all taken into consideration,” she said, but declined to comment on specific licences citing ministry policy. The statement did not explicitly address CPJ’s questions about MALMAB or Mack’s characterisation of companies as ministry subcontractors.

The statement also said that Israel “is one of the few countries in the world that require a two-stage licensing process by law. In accordance with the two-stage process, the exporter is required to hold a defence marketing license ahead of any marketing or promotional activity and a defence export licence, for the export of any product.”

NSO Group, has characterised lawyer Eitay Mack’s statements as “a complete misunderstanding of how NSO operates” in a statement emailed to CPJ via the Mercury Public Affairs group, but refused to respond on specific points because CPJ declined to identify the interviewee in advance of publication, per CPJ’s editorial policy.

The statement added that NSO investigates credible claims of misuse and shuts down a customer’s system if warranted. Its Governance, Risk and Compliance Committee reviews human rights and compliance issues and “takes every possible step to ensure NSO’s technology is sold only to those who use it as intended – to prevent and investigate terror and serious crime,” the statement said.

Cellebrite said its products “can only be used lawfully – either pursuant to a court order or warrant” and “we do not enter into business with customers whose positions or actions we consider inconsistent with our mission to support law enforcement acting in a legal manner,” noting several layers of oversight, including a board.

The company could terminate license agreements and block software updates in cases where the technology is used in a manner that does not comply with the company’s values, it said in an emailed statement via the Fusion public relations firm.

Al-Jazeera reported that in 2018 Bangladesh’s army secretly purchased equipment from the Israeli company PicSix to capture communications from mobile phones. Bangladesh’s foreign minister has denied purchasing interception equipment from Israel, according to that report. PicSix did not respond to CPJ’s request for comment submitted via its website.