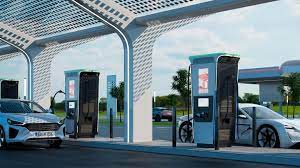 Plenty of Americans are confused about the basics of electric vehicles (EVs), says Jeff Allen, the executive director of Forth, an advocacy and research organisation focused on electric mobility. A question he still hears from drivers: “Can I take it safely through the car wash? Spoiler: Yes,” he says.

Fears about EV batteries are diminishing, too. “The batteries in these cars have really outperformed what [car companies] thought they would do,” says Luke Walch, who owns the used electric vehicle dealership Green Eyed Motors just outside Boulder, Colorado.

A cottage industry of battery health diagnostic companies has sprung up to assess used cars. With permission from owners, Recurrent collects data from 6,000 EVs on the road. “Transparency here helps accelerate the market,” says cofounder and CEO Scott Case.

Stephanie King, who lives outside of Portland, Oregon, bought her second electric vehicle – and first used one – this month, after a crash totalled her old car. Her used 2019 Kia Niro was more expensive than the new one she bought two years ago, but there just wasn’t that much available, she says. For King, driving electric is non-negotiable, especially because she’s a full-time ride-hailing driver who puts a lot of miles on her car.

“I couldn’t do that to my planet,” she says of gas-powered cars. She’s filing paperwork to take advantage of Oregon’s rebate program now.

Policy experts are divided on the value of EV incentives, especially for used cars. For reducing greenhouse gas emissions, “it’s not a well-targeted solution,” explains economist Dave Rapson, who teaches at the University of California at Davis.

EVs are greener than conventional cars, but they still make use of a dirty electric grid, and money spent forcing their adoption might be better used getting utilities and big industries to clean up the energy supply.

Tax credit programmes for new EVs have proven expensive, with part of the benefit absorbed by automakers who may use it as an opportunity to raise prices. That sort of padding might have made more sense a decade ago, when carmakers were reluctant to build any electric vehicles at all, but are less so now, with a dramatic shift to all-electric line-ups. (That’s one reason the initial federal tax credits phased out when an automaker sold 200,000 vehicles.)

And insofar as those discounts do help lower the prices of electric vehicles, additional incentives for used cars result in “double dipping,” according to Rapson, because the government is subsidizing the same car twice.

But if the mission is simply to get more people driving electric cars? In that respect, incentives do the job, Rapson adds – so long as they’re designed well. Existing incentives for new EV buyers aren’t helpful for many people because these incentives are structured to reduce tax burdens on higher incomes.

The recent House of Representatives draft of the Build Back Better bill would help solve that problem by applying a rebate when the buyer purchases their vehicle so it can go toward their final car payment. The dealership would be reimbursed by the IRS.

Pete Slowik, a senior researcher in the electric vehicle programme at the International Council on Clean Transportation, believes incentives are key to getting more and different kinds of people into EVs. “Our research finds that the financial savings from EVs relative to household income are significantly higher for lower-income households,” he says, largely because poor people spend a higher proportion of their income on fuel.

These customers are also more responsive to incentives than wealthy buyers, who were likely going to buy the new car anyway.

Posada argues it is as crucial as ever to encourage EV sales because EVs are not just good for the planet, but for the people who switch to them from gas-powered cars, providing they can find a car. In August, Posada’s programme in San Mateo relaunched without income requirements, and it now has about 200 people in the queue, she says, with a shopping period that’s double the norm as buyers struggle to find the perfect vehicle.

It’s heartening to see the interest, and she hopes the supply crunch is a hiccup that won’t discourage buyers. Because the world needs a lot more of them. Even in the heart of the electric-happy Bay Area, EVs remain a small fraction of new vehicle registrations—far too few, in her view, to reach an imminently carbon-free future.

After years of hesitancy, demand for electric vehicles has soared with used cars tipping the balance

Underpaid and under fire: The risky business of monitoring Congo’s volatile Nyiragongo volcano