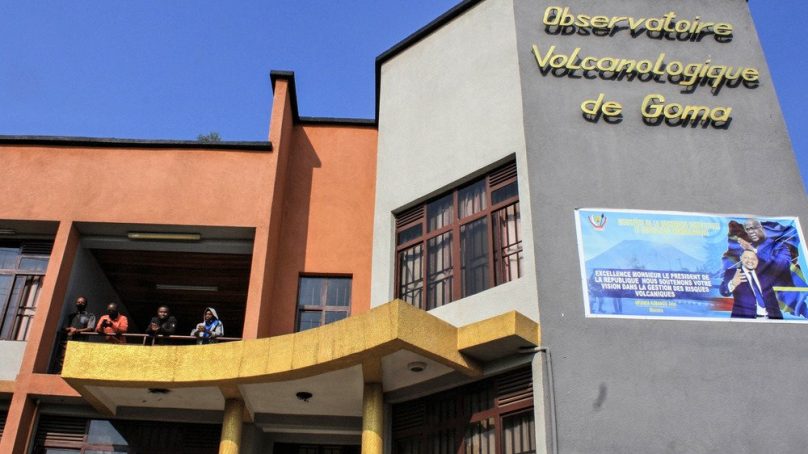 Underpaid and under fire: The risky business of monitoring Congo’s volatile Nyiragongo volcano

Editor’s note: The second of two stories on the aftermath of the May volcanic eruption in eastern Democratic Republic of Congo. The New Humanitarian spent three weeks interviewing displaced people, aid workers and employees at a local observatory tasked with monitoring the volatile Mount Nyiragongo. Read part one here. This story is supported by the Pulitzer Centre.

Funding challenges and security threats are hampering the monitoring of one of the world’s most volatile volcanoes – the Democratic Republic of Congo’s Mount Nyiragongo – even after a May eruption cost dozens of lives and left tens of thousands of people living in displacement camps.

Money is so short at the Goma Volcano Observatory (GVO) that staff members complained of sometimes lacking fuel for field trips, having computers that can’t process hefty data sets, and wearing faulty masks that don’t protect them from gases spewed out by Mount Nyiragongo.

GVO researchers say they work in risky conditions with limited security support. The monitoring sites where they travel to collect data are located in remote places in Virunga National Park, a wildlife sanctuary that is also home to a patchwork of armed groups. Staff members have been shot and wounded while on duty.

“We could predict [eruptions] if we had funding and if we had security in Virunga,” Honoré Ciraba, a senior scientist at the GVO, says.

GVO researchers say their problems need addressing before disaster strikes again: Mount Nyiragongo is considered dangerous because of its fast-flowing lava and its proximity to Goma, an eastern Congolese city of 1.5 million people. Previous eruptions in 1977 and 2002 claimed hundreds of lives on each occasion.

The volcano also sits adjacent to Lake Kivu, a body of water between Congo and Rwanda that contains vast amounts of toxic gas. Scientists say the gas could suffocate lakeside residents – an event known as a limnic eruption – if disturbed by an earthquake or a volcanic event

“The population is still vulnerable to the volcanic risks posed by Mount Nyiragongo,” said Abel Minani, a researcher at the GVO, which is a state institution that falls under Congo’s Ministry of Scientific Research and Technological Innovation.

Founded in 1986, the GVO was in a bad state before the May eruption. The World Bank decided not to renew a $1.8 million programme amid corruption allegations at the observatory, leaving it unable to pay internet bills, even as its staff warned of increased volcanic activity.

After the eruption, which temporarily displaced about 450,000 people, Congo’s government began topping up the wages of GVO staff, according to Adalbert Muhindo, the observatory’s director. Muhindo hopes a new seismology laboratory will soon be built, and that an upcoming international volcanology conference will bring new partnerships and support to the observatory.

But interviews with GVO researchers in the aftermath of the eruption indicate that funding problems persist. And few staff members expect the recent salary supplements to last given the government’s long-standing failure to properly fund the observatory. Officials at Congo’s scientific ministry did not respond to requests for comment in time for publication.

Congolese displaced by Mount Nyiragongo were living in tents made of scraps of cloth earlier this year. Some aid officials said the disaster was a low priority compared to other crises in the country.

Residents displaced by the volcano are, meanwhile, struggling to rebuild their lives. Although some have received support since the eruption, relief groups generally consider the crisis a low priority compared to other issues affecting eastern Congo, where more than a million people have already been displaced in 2021.

Jean de Dieu Mbasa lost his home in May, and with it the money to send his son to school. For a few dollars, he shifts heavy stones on the now-cooled lava to mark where people’s houses once stood. He uses torn socks over his hands to protect them from the heat.

“We lost many things because there was no warning [that the volcano would erupt],” he says.

Based in an office overlooking a dusty football pitch in Goma, the GVO is responsible for researching Mount Nyiragongo as well as its sister volcano, Mount Nyamuragira, which has been especially active in recent days.

It is a Herculean job: Equipment regularly gets looted, destroyed in lightning strikes, or tangled in tropical vegetation, while patchy internet and bumpy dirt roads create other headaches.

Despite a lack of resources, the observatory predicted the 2002 Mount Nyiragongo eruption, which flattened around 15 per cent of Goma and triggered a major humanitarian crisis – in part because local authorities didn’t heed the GVO’s warnings.

International aid was provided for reconstruction efforts in the aftermath of the 2002 disaster. And greater support was extended to the GVO in the form of new equipment and staff training, various UN programmes, and longstanding international scientific research partnerships.

Still, international funding dwindled as the memory of what happened in 2002 receded among foreign donors. And recent corruption allegations at the observatory put off donors, according to UN officials in Congo and members of the GVO.

Awareness of the danger posed by Mount Nyiragongo also waned over the years among Goma’s population. Some residents settled in villages just a few kilometres from the volcano, in areas identified as high-risk.

Warning panels installed in Goma to alert residents to the fluctuating danger posed by the volcano were ignored, or in some cases used for local advertising, according to recent research.

Since the May eruption, additional equipment has been sent to the observatory and monitoring measures have been stepped up, according to Muhindo, who travelled to Kinshasa, Congo’s capital, in recent months to lobby the government for more support.

But the current funding from the government doesn’t cover the GVO’s full research needs, Célestin Kasereka Mahinda, the observatory’s scientific director, said during an interview in August at his office in Goma.

Mahinda said machines and equipment need replacing, GVO staff members need training – some of them abroad – and more awareness-raising needs to be done for Goma’s population.