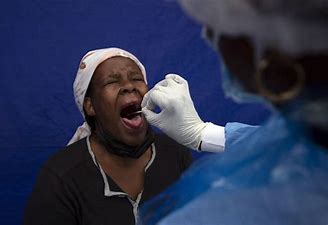 South Africa’s huge wave of omicron cases appears to be subsiding just as quickly as it grew in the weeks after the country first announced to the world that a new coronavirus variant had been identified.

South Africa’s top infectious-disease scientist, who has been leading the country’s pandemic response, said on Wednesday the country had rapidly passed the peak of new omicron cases and, judging by preliminary evidence, he expected “every other country, or almost every other, to follow the same trajectory.”

“If previous variants caused waves shaped like Kilimanjaro, omicron’s is more like we were scaling the North Face of Everest,” Salim Abdool Karim said in an interview, referring to the near-vertical increase in infections that South Africa recorded in the first weeks of December.

Omicron is the fifth coronavirus variant of concern and is spreading rapidly around the world. Here’s what we know.

“Now we’re going down, right back down, the South Face — and that is the way we think it may work with a variant like omicron, and perhaps even more broadly what we’ll see with subsequent variants at this stage of the pandemic,” he said.

Just a week ago, South Africa was seeing skyrocketing positivity rates and massive lines for testing. But during the first days of this week, there has been a turnaround in rates and stress on testing facilities. In addressing the surge of infections, South Africa had decided not to impose a lockdown or other major restrictions, although many countries, including the United States, imposed restrictions on travellers originating in South Africa and neighbouring countries.

On Monday, the United States’ top infectious-disease expert, Anthony S. Fauci, said the Biden administration was considering lifting those travel restrictions, given that community spread of the variant was occurring in many countries.

“We likely are going to pull back on that pretty soon because we have enough infections in our own country,” Fauci told reporters at the National Press Club. “We’re letting in people from other countries that have as much or more infection than the Southern African countries. So [it is] likely we are going to look at that very carefully to see if we can pull back.”

Also on Wednesday, South Africa’s National Institute for Communicable Diseases released a study – not yet peer-reviewed – that bolstered earlier findings from the country that omicron was causing fewer hospitalizations and instances of severe side effects than previous coronavirus variants.

The study found that the omicron variant was 80 per cent less likely to lead to hospitalisation than the delta variant and that for patients who were hospitalised, the risk of severe illness was 30 per cent lower.

Karim said that both the quick peaking of cases and omicron’s lower severity could be due to multiple country-specific factors in South Africa, the most prominent being that more than 70 per cent of South Africans have been infected by previous variants, probably giving a greater proportion of the population a more robust antibody response.

“In South Africa, variants, even highly mutated ones, will run out of people pretty quickly,” he said. “Pretty much by the end of last week it was running out of steam; there just aren’t enough people left to infect.”

Karim noted that omicron accounted for nearly every new coronavirus case in South Africa last week. Recent data from the United States showed that more than 70 per cent of new Us cases were caused by the variant.

“By the time we knew about it, it was fully established,” Karim said. “Based on the proportion of sequences that come back as omicron, I’d say we are probably between two and three weeks ahead of the US, about two ahead of Norway and Denmark, and substantially ahead of, probably up to four weeks, the UK and the rest of Europe. But what we’re seeing here in South Africa at least tentatively should be good news for everyone.”

While the early South African results are heartening, with hospitalisations increasing far less than the overall case count, the officials cautioned that it remains too early to base US policy on the overseas data alone because of differences in demographics and other factors.

For instance, a greater proportion of South Africans have likely been infected by earlier strains of coronavirus than Americans and may retain more protection against omicron as a result, two officials said.

Since South African scientists announced the detection of the omicron variant less than a month ago, European governments have imposed new restrictions, in part because most of the data and research on omicron is so new and unproved.

In Britain and elsewhere in Europe, a dramatic increase in omicron infections has prompted a wave of travel restrictions and lockdowns. In Britain, scientists warned that without stricter measures, infections could reach 600,000 to two million cases a day by the end of this month.

Denmark, considered by health officials to be a test case for highly vaccinated countries, also has experienced a massive rise in case numbers, unlike in previous waves. Scientists say this is due in part to omicron’s higher transmissibility.