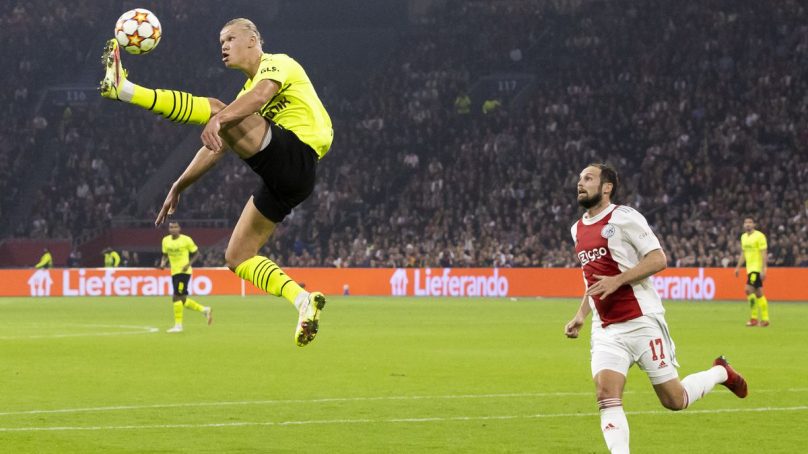 Manchester City are reportedly preparing to hand Ralf Rangnick and Manchester United a major blow by signing one of their top striker targets – Erling Haaland.

Manchester City have been without a true number nine ever since Sergio Aguero’s departure. Gabriel Jesus was seen as his replacement, but the Brazilian now wants to play out wide.

Manager Pep Guardiola has been using a false nine to great effect so far this campaign. Phil Foden is his primary choice and the Englishman is already on 12 goal contributions in 18 games this term.

The tactic also seems to be getting the best out of Jack Grealish and Raheem Sterling, while midfielder Bernardo Silva is also flourishing.

However, Man City could probably do with a new striker if they want to end their Champions League disappointment.

Rivals Man United, meanwhile, could do with signing Cristiano Ronaldo’s successor over the next couple of seasons. Sport Witness, who cite Bild, provide a big update on the transfer hunt of one goalscoring machine.

They claim City are ‘ready to pay’ the release clause of Borussia Dortmund’s Erling Haaland. It will activate next summer and is reportedly worth €75 million (£63 million).

Haaland already has links with the Citizens, as his father Alf-Inge played for them between 2000 and 2003. The news means Rangnick and Manceshter United will need to formalise a transfer strategy, and fast. If they want to keep Haaland from the clutches of their rivals then they will need to match his release clause themselves.

Dortmund, however, have a plan to keep the Norwegian around. They are set to engage in talks with Haaland and his representatives next month to discover what his plans are.  This could result in a new contract in Germany, and in turn a more worthy release clause of over £100m.

Meanwhile, Guardiola has been speaking about the potential transfer of Ferran Torres to Barcelona. It is picking up pace, as the reigning English champions have reportedly agreed to sell for €55 mllion (£46 million).

“Last question no, we won’t bring in a striker in January,” Guardiola said on the arrival of a potential replacement. “It’s not done officially, I know they are negotiating, it’s close, that’s all. When the club announces it’s done.”

Torres only joined City in August last year. They look set to make a big profit on him as his original switch to England only cost £20.9 million.