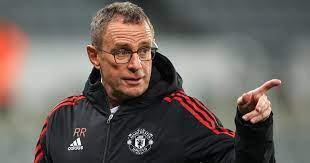 Ralf Rangnick questioned the physicality of his players as Manchester United could only manage a draw at Newcastle. The German suffered his first dropped points in charge of the Red Devils, who battled to a 1-1 draw at St James’ Park.

Newcastle acquitted themselves brilliantly and often beat the visitors to the second balls, Old Trafford legend Gary Neville labelling some of the Man United players ‘a bunch whinge-bags’ at half time.

Rangnick didn’t quite go in on the players like Neville did but suggested there was a problem with the way Man United applied themselves physically. Asked about the performance, Rangnick said:

“I didn’t like it at all. As I’ve said we are trying to get better at controlling games and today we didn’t control the game, apart from some moments at all. It’s all about energy, physicality and who wins the second balls in the transitional moments. In all those areas we were not at our best today.”

In his view, “If we want to be competitive in this ground we have to play physically. We have to get physical. This was not the case in many parts of the game and therefore we were struggling.

“I think our problem was mistakes. We have given the ball away – when in possession too many balls were given away.

“Even in the second half, we equalised and they had two or three players injured but we were not controlling the game. We were making wrong decisions in those moments and that is what it is all about.”

But TalkSPORT’s Perry Groves and Jason Cundy believe it was an issue with the way Rangnick set the team up, claiming it was like watching Leeds when they’re playing at their worst. Groves added that the performance appeared to resemble what things were like when Ole Gunnar Solskjaer was still in charge.

“It wasn’t a lack of effort. It was a lack of cohesion, lack of structure. They wanted to press but it was like watching Leeds play at their worst.

Cundy interjected: “It was chaos out there! At least Leeds play with more structure. If that was a performance under Ole Gunnar Solskjaer then he would’ve got absolutely slaughtered,” Groves added.

“Harry Maguire isn’t going to enjoy playing that way. He’s going to be left man for man and if you’re playing against them, I’d leave two upfront. You’re one pass away from breaking through their midfield as there’s no protection at all. The two full-backs are pushing on. “They were a shambles tonight.”