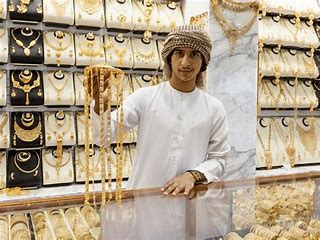 While it didn’t name any state, Bin Sulayem issued a rebuke on behalf of Dubai, accusing the association of trying to undermine the United Arab Emirate’s gold market.

The UAE signed up to LBMA’s recommendations and “has long been cooperative with all international regulations and best practices, including anti-money laundering efforts and unethical sourcing of gold,” minister of state for foreign trade, Thani Al Zeyoudi, said in a statement to Bloomberg News. “The UAE is committed to embedding the very highest international gold standards.”

More than 12 months later, the LBMA has yet to follow through on its threat. Sakhila Mirza, its general counsel, said the association is still assessing what the UAE has done to combat smuggling. The LMBA does see the need for urgency, but has to act within the rules, and “disengaging is the last step,” Mirza said in an interview.

Dubai’s long association with the gold trade is evident in its main market in the oldest part of the city, where scores of shops with elaborate window displays of glittering necklaces, bodices and sunglasses line a pedestrian walkway. Trading operations are conducted in an adjacent rabbit-warren of a building, where men run between small offices, some with reinforced security doors.

Several traders who spoke on condition of anonymity because they feared repercussions said they risked having their supply cut off by Emirati refineries if they asked too many questions about where it came from.

Still, controls have been tightened to tackle money laundering, with customers who spend more than $15,000 required to submit their identity documents and source of funds.

During his visit last month, Deputy US Treasury Secretary Wally Adeyemo noted that stronger enforcement efforts targeting illicit finance could give the UAE a competitive advantage in the region, according to the two people with knowledge of the talks.

The Treasury Department declined to comment through a spokesperson for the Office of Foreign Assets Control, who asked not to be named due to the sensitive nature of sanctions policy.

Thani Al Zeyoudi told reporters last month that Dubai will introduce a publicly accessible system for monitoring imports and exports of gold, and the Dubai Multi Commodities Centre’s “Good Delivery Standard,” will be rolled out nationwide – if only on a voluntary basis.

All gold refineries in the UAE will be required to conduct audits that prove bullion deliveries are responsibly sourced, starting in February, the Economy Ministry said in a statement in December.

“We’re trying to be a real hub when it comes to gold trading,” Thani Al Zeyoudi said. “So, we welcome the world, we welcome anyone who wants to do trade and we want to make sure that we adhere to the international standards through the delivery standards.”

In October, Switzerland’s State Secretariat for Economic Affairs instructed Swiss refineries to take steps to identify the true country of origin for all gold emanating from the UAE, saying that was necessary to ensure they weren’t being sent illicit supplies. Bin Sulayem again took to LinkedIn to say the Emirates enforced the OECD’s guidelines on sourcing minerals and accused the Swiss authorities of hypocrisy.

Michael Bartlett-Vanderpuye, the chairman of M&C Group Global, which mines and sources gold from Ghana that’s mainly sold to clients in the UAE, described the clashes with London and Switzerland as “an international gold power play” with each centre protecting its turf.

“I always found it very difficult to believe that people are actually able to bring gold to the UAE without the documentation,” he said. “When I look at the system at the airport, I find it near to impossible.”

“We don’t think everything coming from Dubai is illegal, but we have doubts about the legitimacy of some of the integrity of the supply chain,” Jose Camino, Metalor’s group general counsel, said in an interview. “We are happy to pass it by.”

Dubai’s supporters claim African customs data aren’t reliable and even the UN can’t accurately measure illicit trade flows. Behind closed doors, UAE officials point the finger at their counterparts in Africa and forgers who obscure the gold’s origins by issuing documents that are impossible to distinguish from the real thing.

That’s little comfort to the authorities in the Democratic Republic of Congo, a vast central African country that’s struggling to rebuild after more than two decades of conflict. It has some of the world’s richest reserves, including Kibali in the northeast of the country — Africa’s biggest gold mine — yet, perversely, the DRC is one of the biggest losers of the illicit gold trade.

An army of small-scale miners operate below the government’s radar, but data show the informal industry generated just $2.4 million in official gold exports last year. Statistics from the UN and IMF suggest the fruits of their labour slipped across the border instead: Uganda and Rwanda shipped bullion worth $1.8 billion and $648 million respectively in 2020, despite having little gold of their own.

“It’s ours,” Congolese Finance Minister Nicolas Kazadi said in an interview at his office in the capital, Kinshasa. “It’s gold from Congo.”