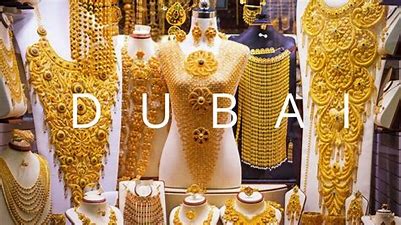 In the moon-like landscape of northern Sudan, informal gold miners toil with spades and pickaxes to extract their prize from shallow pits that pockmark the terrain.

Mining ore in the sweltering heat of the Nubian desert is the first stage of an illicit network that has exploded in the past 18 months following a pandemic-induced spike in the gold price.

African governments desperate to recoup lost revenue are looking to Dubai to help stop the trade.

Interviews with government officials across Africa reveal smuggling operations that span at least nine countries and involve tonnes of gold spirited over borders. That’s a cause for international concern because the funds from contraband minerals dealing in Africa fuel conflict, finance criminal and terrorist networks, undermine democracy and facilitate money laundering, according to the Organisation for Economic Cooperation and Development.

While it’s impossible to say precisely how much is lost to smugglers each year, United Nations trade data for 2020 show a discrepancy of at least $4 billion between the United Arab Emirates’ declared gold imports from Africa and what African countries say they exported to the UAE.

The UN and NGOs have long questioned the apparent role of one of the Emirates – Dubai – in facilitating the trade by closing its eyes to imports from dubious sources. The UAE strenuously denies any involvement in illegal practices. But as global scrutiny over corporate governance intensifies, the extent of the smuggling now under way poses increasingly uncomfortable questions for Dubai and its reputation as a gold trading hub.

Allegations that it’s not doing enough to stamp out questionable flows of the precious metal have led to public slanging matches with London, home to the world’s largest gold market, and with Switzerland, the top refiner.

Deputy US Treasury Secretary Wally Adeyemo discussed concerns about gold smuggling with Emirati officials during a visit to Dubai and Abu Dhabi in mid-November, according to two people with direct knowledge of the matter who asked not to be identified because they’re not permitted to speak publicly about it.

“I want to address the elephant in the room: namely, the consistent and unsubstantiated attacks launched on Dubai by other trading centres and institutions,” he said at a conference in the Emirates. They are, he said, “lies.”

African governments are adding to the pressure. Besides Sudan, authorities in Nigeria, the Democratic Republic of Congo, Zimbabwe, Mali, Ghana, Burkina Faso, Central African Republic and Niger complain that tonnes of gold leaks across their borders each year, and they allege most of it heads to Dubai.

“It’s a huge loss,” Nigerian Mines Minister Olamilekan Adegbite said in an interview in his office in Abuja, the capital, where glass cabinets display rock samples that illustrate the nation’s mining potential, so far largely untapped.

The bulk of Africa’s illegally mined gold is channelled to Dubai through refineries in countries like Uganda and Rwanda, or is flown there directly in hand luggage, often with false papers, according to government and industry officials, UN experts and civil rights groups. Once there, it can be further melted down to obscure the source before being turned into jewellery, electronics or gold bars, they say.

“Most European countries will ask you for your certificates of export from the country of origin,” said Adegbite. “If you do not have that, the gold is confiscated and returned to source.”

On paper, the UAE requires the same. “But, you see,” Adegbite added, “in Dubai they look the other way.”

The UAE’s foreign trade ministry declined to answer questions on gold from Africa. Bin Sulayem said in an interview that a global ban on gold hand-carried on airlines – a traditional means of smuggling – would fix the problem. “We have a better track record than any of the major cities,” he said. “The main complaint we’re getting is ‘you’re too tough.’”

Gold smuggling is an age-old practice, but it became all the more rewarding as the price of bullion soared to a record $2,075 an ounce (28.3 grammes) in August 2020. The illicit trade has since taken off like never before in Africa and authorities there have made scant headway in reining it in, an analysis of publicly available data from governments and other sources shows.

Sudan’s Finance Ministry, for example, estimates that 80 per cent of gold production goes unregistered. Rwanda is set to ship $732 million worth of the metal this year, more than two-and-a-half times the value of its 2019 exports, according to International Monetary Fund figures.

That’s despite Rwanda barely mining any gold of its own, prompting accusations from the government in neighbouring Congo that the precious metal originates from its territory.

Rwanda is working to become a regional mineral processing hub, which accounts for its increased exports, Rwanda Mines, Petroleum and Gas Board said in a statement. It has invested in new facilities which “source raw materials from local and regional operators in compliance with legal and regulatory requirements,” the board said.

Reports from the UN and other sources point to 95 per cent of production from east and central Africa ending up in Dubai. That’s a potential problem because much of the region is designated by the OECD as a conflict or high-risk area, meaning companies are required to show that imported gold is responsibly sourced.

The European Union brought in legislation this year aligning it with US efforts to stem the trade. However, enforcement is notoriously difficult.

Uganda, one of Africa’s main refiners of informal, or artisanal gold, more than doubled its exports this financial year to some $2.25 billion, central bank statistics show. Again, the UAE was by far the top destination, according to UN trade data.

The UN has accused Uganda and Rwanda of trading in gold smuggled from neighbouring eastern Congo, a region mired in conflict.

Desmond Tutu wanted to be remembered only as one who ‘loved, laughed, cried, was forgiven and forgave’