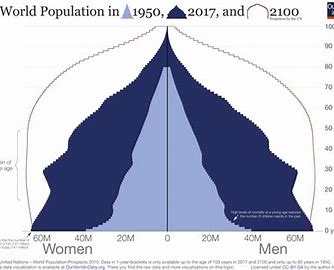 The International Institute for Applied Systems Analysis (IIASA) team has done its study on population growth quite differently. Instead of basing its model on fertility rates, and how they would change, the group used a variable called completed cohort fertility at 50 years (CC50).

This counts the number of children each woman has had by the time she reaches 50.

It is subtly different from overall fertility rate because it is less sensitive to the age at which women have their children, and it does not show the same rebound effect when fertility drops to low levels.

And instead of assuming a figure for this CC50 at specific time points in the future, the IHME model used real-world data to work out the relationship between CC50 and its two main drivers: educational attainment and unmet contraceptive need. This meant they could plug national data on education and contraception – and how they expected them to change – into the model instead of simple estimates of future fertility.

Christopher Murray, who leads the IHME team, says this approach makes the IHME forecast more reliable and more valuable because it can test the impact of changes and assumptions. The model could forecast what happens to population when policies encourage more girls to spend longer time in school, or when health infrastructure improves to secure more reliable access to contraception.

“In the policy realm it’s much more useful to have models with causal connections,” Murray says.

Plenty of demographers disagree. “There are a few issues with those [IHME] projections that are a little bit problematic,” says Stuart Gietel-Basten, a demographer at the Hong Kong University of Science and Technology. Together with Sobotka in Vienna, Gietel-Basten published a preprint of a technical critique of the IHME study that highlights what they claim are “internal inconsistencies, discrepancies and illogical and implausible trends”.

For example, the duo points to Iraq, which the IHME forecasts will boast the world’s fourth-highest female life expectancy by 2100, as well as welcoming huge numbers of immigrants in the coming decades. The critics say this is highly unlikely.

Sobotka and Gietel-Basten have organised a critical letter signed by 170 demographers and sent it to The Lancet, which published the IHME paper. The letter has not yet been published.

Kaneda says that the IHME group that produced the paper has little background in demography. Instead, it based its population forecast on methods it developed to calculate a regular set of health statistics called the Global Burden of Disease. “I think it’s a great effort, just that they should go back and revise some of this stuff,” says Kaneda.

Murray rejects the criticism, saying that the UN model itself carries its own “strange set of assumptions” and that the demography community is reluctant to accept ideas from outside the field. “Let’s look at how forecasts go in the next five or ten years in places with low fertility,” he says. “Are we going to see in China and Korea and Singapore, Greece and Spain that fertility shoots up as the UN says, or not? I think we won’t.”

The UN’s past forecasts have a decent track record. In 1968, for example, the UN projected that the global population in 1990 would be 5.44 billion — within two per cent of the best estimate of the real figure of 5.34 billion. In 2010, the estimated global population was 7 billion, compared with projections in previous UN reports that ranged from 6.8 billion to 7.2 billion.

The organization is also using new and better sources of data about populations in specific countries to upgrade its historical records, Gerland says. This will make the modelling more accurate, he adds, and should allow for more regular updates — although the current update is taking longer than expected and has delayed the latest global population report.

Some demographers stay on the side-lines. “I steered well clear of getting involved in any of that because it got quite nasty and it’s very difficult to really say what’s the better approach,” says Tom Wilson, a demographer at the University of Melbourne, Australia. “The one thing unfortunately about population projections is they will always turn out to be wrong.”

That’s why some in the field prefer to leave the future alone and focus instead on improving the accuracy of data used immediately to set policy: counting people alive right now. In some places, especially those facing instability and civil strife, that’s more difficult than it sounds. “In Afghanistan, the last census was in 1979.”

In the DRC it was 1984,” says Andy Tatem, a population researcher at the University of Southampton, UK. In those cases, governments tend to assume a linear annual increase to estimate current numbers. But that could be wildly inaccurate. A 2017 analysis6 by researchers at the University of Antwerp in Belgium found that national population estimates used by the government of the Democratic Republic of the Congo ranged from 77 million to 102 million.

To produce better data, researchers are testing ways to count people without actually counting them.

One technique is to monitor mobile-phone traffic. By tracing calls to the phone towers that send and receive them, researchers can use call density around the towers to estimate the local population. In one high-profile application of this technique, researchers from Sweden and South Korea tracked the displacement of people after a devastating earthquake struck Haiti in 2010.

The research showed that the population of the capital, Port-au-Prince, shrunk by almost one-quarter within three weeks of the quake. Tatem’s team has applied a similar technique to Namibia in a study of malaria prevalence in different parts of the country. The results suggested that Namibia was closer to eliminating the disease than policymakers realized at the time.

Researchers are also working to count people on the basis of the size and shape of the buildings they live in. Using satellite photos and image-recognition software, they can map settlements and individual houses, and then build up a picture of the number of residents.

“We’ve done this to fill in gaps in the Colombia census and the Burkina Faso census, and to produce new estimates for the DRC and Zambia and quite a few other countries,” Tatem says. “It’s an approach that is starting to take off.”

Even so, old-fashioned population counts still have their place. “The census collects so much more than just population numbers,” Tatem adds. “These methods should be seen as a complement to the census rather than something to replace it.”