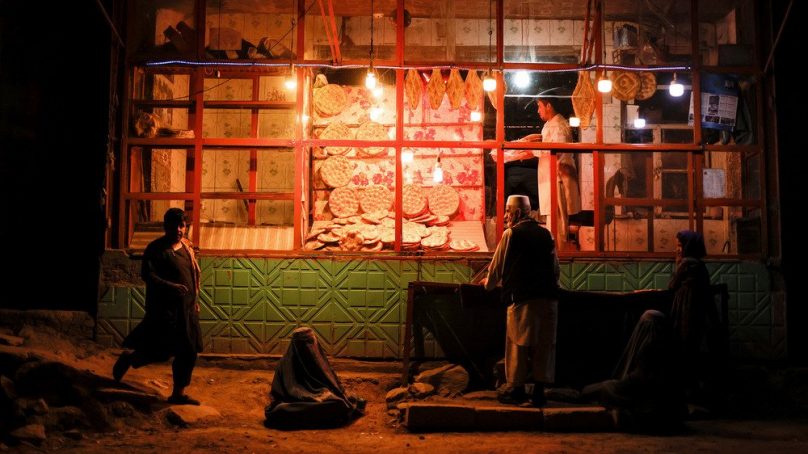 Hunger is rising in Taliban-controlled Afghanistan, and the clearest sign may be who’s now struggling to afford food: the educated, urban, and middle-class.

Only five per cent of Afghan households reported having enough food to eat, according to recent World Food Programme surveys. For the first time, there are similar levels of food insecurity among urban Afghans as drought-hit rural ones, the UN agency said: “Job losses, lack of cash, and soaring prices are creating a new class of hungry in Afghanistan.”

Food worries now stretch from the country’s remote rural corners, which often face the brunt of shortfalls caused by drought, conflict, or under-development – to its urban areas.

Maryam*, a private school teacher in Kabul, is trying to fend for her family amid rising prices and dwindling income.

Before the Taliban takeover, her father collected a pension and her brother held a government job. Both are now out of work, leaving Maryam the sole breadwinner for a family of 10.

“With the arrival of the Taliban, my father is too scared to reveal his identity as a policeman [to collect his pension],” Maryam told The New Humanitarian by phone. “So, I have to help support the whole family.”

Covid-19 closures kept her out of work for months before the Taliban seized Kabul. Her private school has re-opened, but there are few students. She hopes to earn extra money by providing private tuition, but she’s afraid to leave the house on her own, fearing strict Taliban censure.

Her father and brothers are trying to help by seeking out day labour. But in Kabul, such casual work is only available one day a week on average – and falling – according to the WFP household surveys.

“We have cut our grocery expenditures and are trying to consume as little as possible in fear of starvation,” Maryam said. “In Afghanistan, the foremost need right now is food security.”

While many are struggling across the country as food prices spiral, urban households are among the most vulnerable, said Saeed Ullah Khan, a consultant with Islamabad-based Glow Consultants, whose work includes humanitarian programme monitoring and research in Afghanistan and Pakistan.

“What they’re doing is they’re going to the more negative coping mechanisms: selling assets, starting with the household items, property, and jewellery,” said Khan, whose firm has conducted food security research across Afghanistan.

“Those who are living in the urban centres, they do not have any homegrown food at their disposal,” he added. “In the rural areas, people do have chickens, they have orchards, they have some kind of storage capacity, whereas these kinds of options are not available to people in the urban settlements.”

Afghanistan’s humanitarian crises – from conflict and drought, to internal displacement and forced returns – are deeply intertwined. Violent conflict forces families to migrate or flee, but so does drought, food insecurity, and a lack of economic opportunity.

Today’s economic crash and food worries could push desperate people to migrate in the weeks or months ahead, Khan said. “In Afghanistan, the foremost need right now is food security,” he said.

There are a range of factors driving Afghanistan’s economic collapse and the new pressure on food affordability. The US has frozen several billion dollars in foreign reserves, and institutions like the World Bank and the International Monetary Fund have suspended funding.

Afghan banks are running out of cash, and sanctions have also slowed money transfers and remittances.

The swift withdrawal of international donor funds – foreign grants added up to three quarters of public spending – means many government employees aren’t being paid, and the healthcare system is on the verge of collapse.

The latest political and economic upheaval came on top of a severe drought that had already plunged a third of the population into crisis or emergency levels of food insecurity. Wheat harvests this year are expected to be 25 per cent below average, according to the UN’s food and agriculture agency, FAO.

In northwest Afghanistan’s Badghis province, the drought and lost income have pushed farming families to the brink, said Abdul Ghani, who supports an extended family of 21 on the outskirts of the provincial capital, Qala-i-Naw.

Ghani said he planted dozens of hectares of wheat, barley, rye and sesame this year, but the rains were too erratic: His August harvest yielded little.

“I see the children are always hungry; even the grown-ups are not fully fed three times a day with the little stocks and savings that I have,” he said. “All of our hard work, the long wait and investment, went to waste.”

Qala-i-Naw saw fierce fighting between the Taliban and former Afghan security forces in July. Now that the government has fallen, two sons previously employed as civil servants lost their jobs.

Abdul Aleem, newly appointed by the Taliban to oversee agricultural affairs in the province, told The New Humanitarian there are plans to distribute seeds to farmers, and to construct pistachio orchards in a region known for their cultivation.

So far, there is little sign of such projects, said Shams Haq, an agriculture and irrigation specialist from Badghis.

“The government is less focused on the farmers, and many aid agencies have stopped their operations,” he said.

Ghani said two of his eldest sons have, in the past, used migration as a tool to try and change their family’s fate – crossing into Iran and onward to Turkey or Europe. But both were eventually turned away or deported.

For now, Ghani and his family are surviving on their shrinking savings and a meagre harvest. But his anxiety is growing as winter approaches. He said he’s pinning his hopes on the resumption of aid, and on an end to the drought.

“The entire province is faced with the same fate,” Ghani said. “All of our hard work, the long wait and investment, went to waste.”