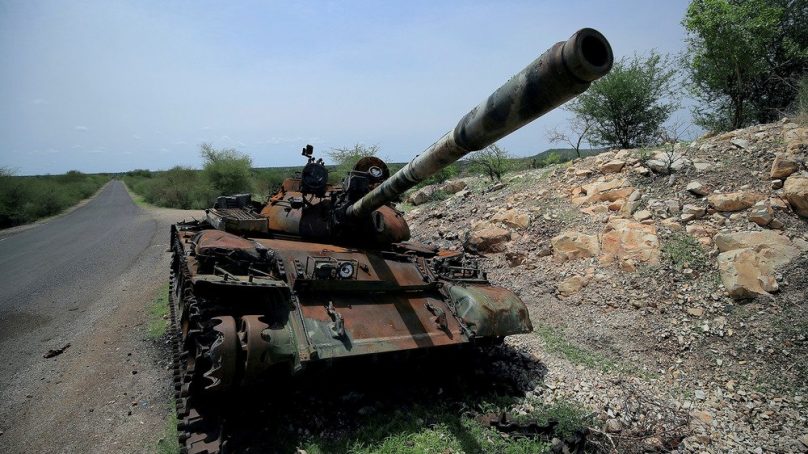 Ethiopia’s government has launched a new offensive against rebel forces from the blockaded Tigray region, where malnutrition and starvation deaths are rising while UN officials coordinating the humanitarian response have been deported from the country.

Federal forces had previously withdrawn from most parts of the northern region after rebels took control in late June.

Aid officials said the deportations will have a silencing effect on those wanting to speak out against the widening conflict, and said they will leave some agencies rudderless at a time when they are needed the most.

Among those deported was the country representative of UNICEF; the head of the UN’s emergency aid coordination body (OCHA) in Ethiopia; and the UN’s acting humanitarian coordinator, Grant Leaity, who had recently called on the government to lift a months-long humanitarian and economic blockade that has prevented medicine and food from reaching Tigray, pushing some 400,000 people to the brink of famine.

Addis Ababa denies it is blocking aid to Tigray and using starvation as a tool of war. The government has previously said relief agencies are providing weapons and diverting aid to rebels, though clear evidence to support these assertions has not been provided.

“It is an aggressive attempt at silencing the aid community,” David Del Conte, an aid worker leading a campaign on the humanitarian crisis for Refugees International, said of the recent expulsions. “This distracts attention from the famine and blockade, it is just going to make things worse,” he added.

Some 5.2 million people are currently in need of urgent humanitarian assistance in Tigray, where the government has cut electricity, telecommunications, and banking. As starvation deaths rise, aid officials have warned of a repeat of the 1980s famine in Ethiopia, which left as many as one million people dead.

In some towns in Tigray, aid officials – who spoke on condition of anonymity due to the risk of reprisals – said acute shortages of medicine mean hospitals can now only provide advice to patients. In other places, lack of food has caused the price of basic commodities to soar beyond what most people can afford.

Hundreds of thousands of people have also been displaced in neighbouring Amhara and Afar regions, where Tigrayan rebels said they launched offensives in order to break the federal blockade. The New Humanitarian has documented several alleged atrocities by the rebels, though they deny targeting civilians.

The Tigray conflict began in November 2020 after months of tension between the government and the region’s ruling party, the Tigray People’s Liberation Front (TPLF). The TPLF dominated Ethiopian politics for almost three decades but lost power when Prime Minister Abiy Ahmed took office in 2018 amid anti-government protests.

Addis Ababa announced a unilateral ceasefire on 28 June – after sustaining heavy battlefield losses to the rebels – but the government then tightened a blockade on Tigray and used the period to regroup and source new recruits. Tigrayan forces also launched a mobilisation drive.

Now, a new military operation has begun just as the rainy season comes to a close, triggering fears of renewed civilian suffering. The government’s previous campaign in Tigray – supported by Eritrean troops and Amhara militia – was marked by the mass killing of Tigrayans, ethnic cleansing, and the use of rape as a weapon of war.

Aid workers and analysts said the expulsion of UN officials was designed to remove critical voices ahead of the new offensive, which comes just a few days after Abiy was sworn in for a new five-year term. Analysts also said the expulsions could be seen as a reaction to the increased international pressure Addis Ababa has been facing.

A damaged building in the Amhara town of Nefas Mewcha. Residents said Tigrayan forces attacked the town in late August.

Last month, US President Joe Biden signed an executive order threatening sanctions against individuals responsible for the conflict and obstructing humanitarian relief. And in an media interview on 28 September, the UN’s top humanitarian official, Martin Griffiths, described the crisis as a “stain on our conscience”.

Though the expulsions are unlikely to significantly impact the operations of an already hampered relief effort, aid officials said they were worried that the UN could lose further leverage when it comes to negotiating humanitarian access with the government.

Finding new officials to fill senior management positions may also take time due to internal recruitment processes and constraints the government has created on issuing visas for aid agencies.

“If [aid agencies] want to keep up their operations, they… prefer not to speak up and at least keep the assistance going,” one aid official from an international organisation told The New Humanitarian. “It’s a choice we have to [make].”

It’s not yet clear what effect the new federal offensive will have on humanitarian agencies, though heavy fighting is likely to constrain access in all three regions currently affected by conflict.