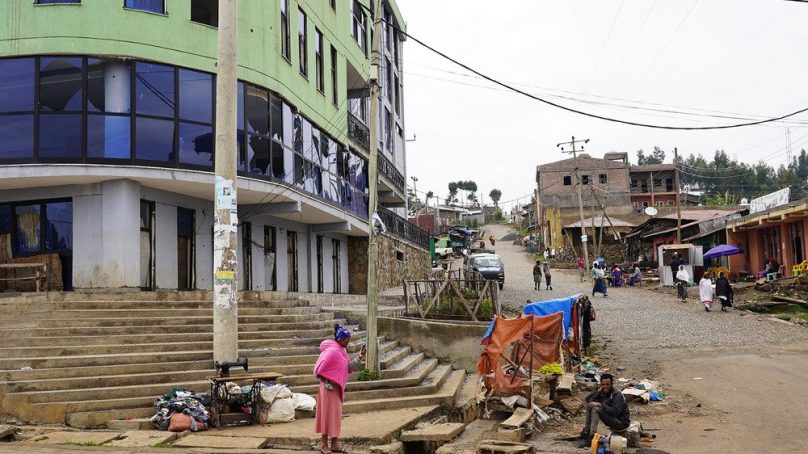 Ethiopia’s national army’s offensive launched on Monday has focused on rebel positions in Amhara, where government officials say half a million people have been uprooted in recent months.

Aid agencies were already struggling to reach parts of the region, particularly those under rebel occupation.

Although rebels said their forces are currently “holding ground”, a federal push on Tigray could compromise humanitarian access there too: When Ethiopian and Eritrean forces last conducted operations in the region, they often blocked aid groups from reaching territory controlled by the rebels.

However, for now, the main humanitarian concern in Tigray is the blockade. Movement on the only operational road into the region – via the Afar region – is severely restricted because of bureaucratic hurdles, according to the United Nations.

Addis Ababa says it has made efforts to reduce bottlenecks on the road by cutting down checkpoints. But just 686 humanitarian trucks have entered Tigray since July, according to the latest situation report by United Nations Office for the Coordination of Humanitarian Affairs (OCHA).

This is far below the 100 trucks a day the UN says is needed to avert a famine.

Although passenger flights transporting humanitarians to and from Tigray have been authorised, aid workers have been harassed during airport checks and forced to leave behind personal medicine and other equipment.

An EU humanitarian air bridge has, meanwhile, completed two flights carrying lifesaving cargo, including nutrition supplies and hospital material. But that haul doesn’t come close to covering the needs on the ground.

Lack of fuel in Tigray has caused NGOs “to suspend operations in some areas”, said Gemma Snowdon, a communications officer for the World Food Programme. The last fuel tanker to enter Tigray came on July 29, while eight tankers are currently stationed in Afar pending government approval to proceed.

Towns in Tigray now face acute shortages of medicine. According to the UN, more than a dozen people have died due to a lack of catheters at one hospital in Tigray’s capital, Mekelle, while broken oxygen machines and shortages of dialysis supplies are threatening lives.

At a hospital in Aksum – scene of one of the worst reported massacres during the conflict – essential medicines are depleted, said a UN official who asked not to be named. The official said the hospital had been receiving supplies from Doctors Without Borders (MSF) until the organisation was suspended.

In Shire, a Tigray town hosting 10 of thousands of displaced people, insufficient medical supplies are leading to increased cases of malaria, dysentery and rabies, the UN official added.

In a subsequent cabinet reshuffle, Abiy gave the defence minister portfolio to an ethnic Tigrayan who led the region’s federally appointed interim administration earlier this year. But analysts say that move is unlikely to be seen as much of an olive branch in Tigray.

Although most officials around Abiy appear supportive of the war effort, one high-ranking political figure in Addis Ababa told The New Humanitarian they disagreed with how it is being prosecuted.

“We have to separate the civilian population from the soldiers,” said the politician, who asked not to be named, citing the high risk of retribution. “I want the TPLF to be removed because they are also harming their own people. But we have to be systematic [in the separation].”

TPLF officials said they are in favour of a “peaceful resolution” to the conflict but only if the blockade is lifted, Eritrean troops leave the country, and Amhara militia withdraw from western Tigray, which they annexed over the course of the conflict.

Assefa, the analyst, said there appears to be little possibility of a negotiated end to the conflict. Neither side, he added, will likely achieve a “decisive military victory that could result in lasting solutions”.

Somalia maritime dispute: Kenya reduced to a sitting duck as all five neighbours claim its territory