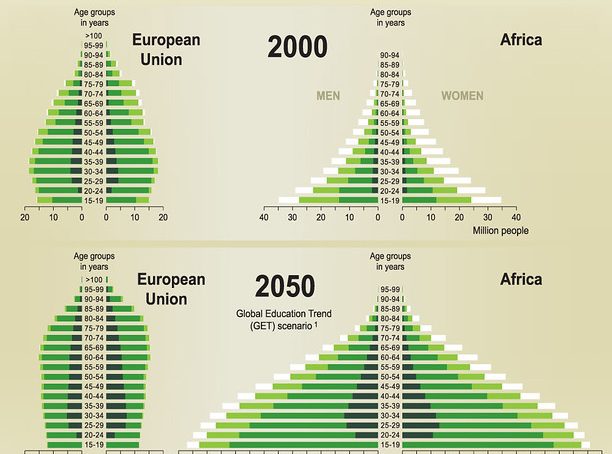 Predictions of population in both the near and long-term future typically come down to estimates of how quickly fertility will change. And that means demographers have to make some educated guesses about how people will behave as their circumstances alter.

In high-income countries, these behavioural changes are usually driven by economic factors. As opportunities emerge, women prioritise careers and couples delay having children during a recession.

In less-wealthy nations, other factors dominate. As more girls are educated, they tend to have fewer children and to have them later. And more people have access to contraception as health systems and distribution networks improve. In that sense, falling fertility rates reflect economic development.

Demographers expect that the pandemic will cause a short-term dip in fertility, in richer countries at least, because of the associated economic uncertainty. By contrast, poorer countries could see a surge in pandemic births because of the disruption to contraception supplies.

In a preprint1, Sobotka and colleagues report on data for 17 countries across Europe, Asia and the United States showing that the number of births did fall – on average by 5.1 per cent in November 2020, 6.5 per cent in December 2020 and 8.9 per cent in January 2021, compared with the same months of the previous year.

Spain sustained the sharpest drop in the number of births among the countries analysed, with that metric plummeting by 20 per cent in December 2020 and January 2021 compared with a year earlier.

Some experts predict that births will rebound. “By October it looks like we might be back to normal birth volume,” says Molly Stout, an obstetrician at the University of Michigan Health in Ann Arbor. Over the course of the pandemic, Stout’s team has used electronic health records to model the number of pregnancies in the surrounding community and so plan for an expected number of births. Its published analysis accurately predicted a 14 per cent year-on-year fall in births between November 2020 and March 2021, and suggested a comparable surge in births in the last third of 2021.

How fertility rates and population numbers will change in the longer term, over several decades or more, is more difficult to predict. And this is where the serious controversy starts.

For decades, the UN Population Division had the field largely to itself, and churned out routine updates every couple of years. Its most recent report, published in 2019, forecasts that global population will continue to rise from its current 7.7 billion and could reach nearly 11 billion by 2100.

Its next biennial update was due this year but has been postponed to 2022.

In 2014, a group at the International Institute for Applied Systems Analysis (IIASA) in Vienna produced its own forecast. It said that world population is most likely to peak at 9.4 billion around 2070 and will fall to 9 billion by the end of the century. The group’s numbers rose slightly in a 2018 report3 that projected a peak of about 9.8 billion around 2080; a subsequent update has population cresting at a little under 9.7 billion around 2070.

And then, last year, a paper4 from a team at the Institute for Health Metrics and Evaluation (IHME) at the University of Washington’s School of Medicine in Seattle, suggested that global population will peak at around 9.7 billion in 2064, and then decline to about 8.8 billion by 2100.

Some 23 countries could see their current population halved by the end of the century, the study said, including Japan, Thailand, Italy and Spain.

The different outcomes reflect the uncertainty in making projections over such a long time period, says Leontine Alkema, a statistical modeller at the University of Massachusetts Amherst.

“It’s kind of an impossible exercise and so we do the best we can and it’s good that different groups use different approaches,” Alkema says.

The huge range between the studies comes down to the way each research group sets up its forecast. “All three have used a similar starting point [for population] so we know that’s not the problem,” says Toshiko Kaneda, a demographer at the Population Reference Bureau, an independent research organisation in Washington DC.

Kaneda explains, “The issue then is how you think the line will creep up. The assumptions there are where people get it wrong.”

Changes in fertility rates with anticipated economic development are key, and the three models account for this process in different ways. The UN modellers divide the way that fertility tends to slow, decline and then recover into several phases. Changes in each country’s birth rate in recent years are then used to place each nation into one of these phases, and some 100,000 possible pathways for future fertility are modelled. The UN then takes the median of these projections and presents it as the most likely scenario.

Instead of relying on data and past trends to forecast future falls in fertility due to development, the IIASA group turned to expert judgement. They asked some 200 researchers, including economists, demographers and sociologists, to predict fertility rates for individual countries in 2030 and 2050, on the basis of what they expected to happen to several social, health and economic factors.

IIASA’s fertility-rate forecasts are noticeably lower than the UN’s. For example, the researchers estimate that fertility for every country in sub-Saharan Africa will be below the replacement level of 2.1 by the end of the century. The UN forecasts that only one-third of countries in the region will fall below this level.