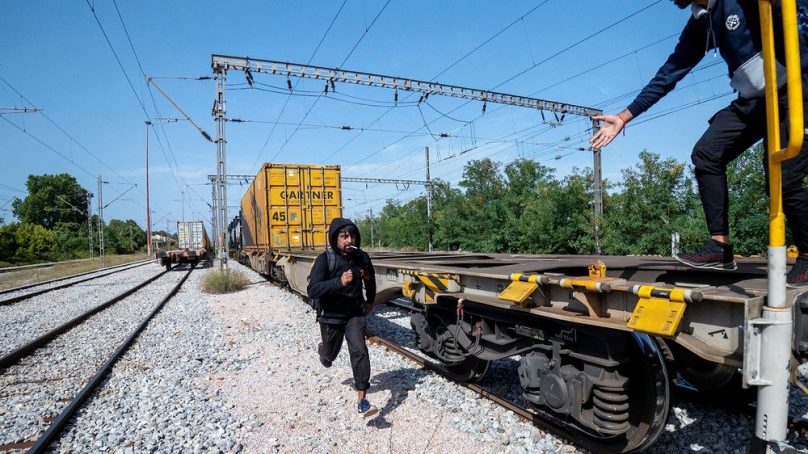 A little over a year ago, the Moria refugee camp on Lesvos burnt to the ground – thrusting the dismal conditions in the overcrowded, under-resourced and squalid camps on the Greek islands into the international spotlight.

The Greek government has since declared success in bringing the movement of asylum seekers and migrants into the country under control.

“Greece is no longer experiencing a migration crisis,” Minister of Migration and Asylum Notis Mitarachi said in August.

But the rosy picture of reduced numbers and improving conditions presented by the authorities masks a stark reality for those seeking protection, according to humanitarian organisations and human rights groups.

The number of asylum seekers on the Greek islands has fallen to just over 4,500, down from around 40,000 in April 2020. And the first of five new migration reception centres being built on the islands – with 276 million euros in EU funding – to improve living conditions opened on 18 September.

Overall, the number of asylum seekers housed in facilities throughout Greece managed or supported by the Ministry of Migration and Asylum has fallen by around 50 per cent – from more than 82,000 in August last year to around 42,000 – and new arrivals to the Greek islands are down by 78 percent compared to last year.

However, this is only part of the story. Since March last year, Greece has been systematically pushing asylum seekers and migrants back from the country’s land and sea borders. The pushbacks have been thoroughly documented by human rights watchdogs and journalists, but Greece denies it is engaging in such practices, which are illegal under international law.

At the same time, a series of government policies have made it: more difficult for people who do manage to enter the country to receive refugee status; easier for rejected asylum seekers to be deported; and harder for people who are granted protection to access accommodation, financial support, and services such as healthcare and education.

“Refugees ending up on the mainland shortly after getting protection have no means to overcome the chronic barriers to obtaining documents such as a residence permit or a tax number, which are necessary for accessing their rights to housing and to social welfare,” explained Minos Mouzourakis, legal officer at the NGO Refugee Support Aegean.

As a result, thousands of people have left for other EU countries since last year after being granted refugee status in Greece. Between July 2020 and July 2021, 17,000 people with international protection in Greece applied for asylum again in Germany, according to a letter sent to the European Commission by the interior ministers of Germany, France, and four other EU countries.

“Greece is not ensuring that these persons are given suitable accommodation and provided with a minimum level of physical subsistence,” the letter stated.

Courts in at least two EU countries – Germany and the Netherlands – have blocked people re-applying for asylum from being deported back to Greece because of the “serious risk of inhumane and degrading treatment”, according to one court decision.

The New Humanitarian spoke to dozens of asylum seekers and refugees currently in Greece or who have recently left the country after being granted refugee status, to understand what conditions are like and why so many are being pushed to leave.

Mohammed arrived on the island of Kos in May 2019 with his wife and three children. The family lived in the official reception centre located far from the main town on the island. They felt isolated, and struggled to access services.

It took more than two years for the family to receive a decision in their asylum case. When it finally arrived in April this year, they were rejected because they had previously lived in Turkey, which Greece considers a safe country for Syrian refugees to be returned to – a designation disputed by human rights organisations.

Mohammed and his family are appealing this rejection, but along with the notice that their request for asylum had been denied, authorities gave Mohammed a piece of paper temporarily protecting his family from deportation because his wife is pregnant and allowing them to travel to the Greek mainland.

“The [authorities] gave me these papers and said, ‘Go to Athens and try your best there to get papers because we can’t do anything for you here,’” Mohammed told The New Humanitarian. “I never expected it to work out, because I had seen what it was like in Kos.”

Still, tired of living in the isolated camp, the family boarded a ferry to the mainland in May to try their luck with the asylum service in Athens. When they approached authorities in one of the refugee camps in the city, they were turned away.

“[They] told us that they could not do anything for us because our asylum was denied [on Kos],” Mohammed said.

Without refugee status, Mohammed and his family weren’t eligible for housing support and he also couldn’t open a bank account – a requirement for renting an apartment on his own. The family ended up sleeping on the streets for 20 days before Mohammed found a way to purchase a housing container in a refugee camp on the black market for 400 euros for the family to live in.

Entry and exit to the camp are not closely monitored, so the family has been able to live under the radar. But they do not have access to services in the camp, such as food distributions, education, and medical care. They are far from the only ones.

According to figures from the Ministry of Migration and Asylum seen by The New Humanitarian, there are more than 2,500 unregistered asylum seekers living in refugee camps in Athens and the surrounding area.

Mohammed has been supporting his family with money borrowed from family and friends, waiting for the appeals process to take its course. But prospects of a positive outcome are slim: in the first six months of 2021, just 8.2 percent of negative asylum decisions were overturned on appeal.

If he and his family are rejected again, Mohammed doesn’t know what they will do next – it’s not a possibility he likes to think about. But even if the family’s application is accepted the second time around, Mohammed has seen enough of life in Greece to know he wants to leave – perhaps to somewhere like Germany, where he thinks refugees are treated better.

“We came with the hope that Greece will help us have a better life,” Mohammed said, clearly disappointed.

Moritz Reinbach, who works with Diakonie, a refugee support organisation in the German city of Hamburg, monitors the airport in the city to keep track of asylum seekers arriving who might need help. He says he encounters people on a daily basis who have been granted refugee status in Greece and have now come to Germany to re-apply for asylum – although sometimes people are sent back if they don’t have adequate legal support.

Paradox of wealth and discontent in Africa rising at same time, limiting democracy to just elections