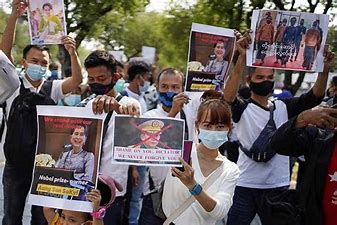 Myanmar’s doctors are taking a stand. For months, many have joined a widespread civil disobedience movement – refusing to work in public hospitals in order to oppose the February 2021 military coup.

They’re showing remarkable courage – and raising important ethical questions – in opposing a regime accused of killing at least 1,300 people and arresting thousands in the months since the coup.

The military coup ended a decade of democratic transition in the Southeast Asian nation. The people of Myanmar have clearly spoken out by staging acts of civil disobedience, which has provoked a violent and worsening backlash from the military establishment.

Physicians working in public hospitals, which are now under the control of the military, led some of the first walkouts.

The doctors’ decisions highlight an ethical dilemma balancing their responsibilities as physicians and as citizens. Doctors must provide medical care to those in need. They, more than anyone, knew their choice to abstain from seeing patients would likely exacerbate Myanmar’s health crisis.

However, like all members of society, they also have a moral obligation to avoid becoming culpable in the oppression of others. As several prominent Myanmar physicians wrote in a letter published in The Lancet, performing their duties in an “unlawful, undemocratic and oppressive military system has become untenable”.

I’m questioning the role I play in one of the most dehumanising and inherently unjust facets of American society: mass incarceration.

For those of us not in Myanmar, it is easy to watch from afar and praise or critique this act of civil disobedience. A more challenging task is to use this as an opportunity for self-reflection – to consider the structures of oppression that we ourselves are complicit in, closer to home. This is why I’m questioning the role I play in one of the most dehumanising and inherently unjust facets of American society: mass incarceration.

I am an emergency medicine physician practising in New York City. Previously, I completed my residency training in an emergency department at a large public hospital in Los Angeles.

The US carceral system relies heavily on hospital emergency departments to function. When someone is taken into custody by law enforcement, they are often first brought to an emergency department to be “medically cleared” by a physician like me – essentially providing documentation that the person in question has no medical emergency that would preclude them from being safely taken to jail.

Often, this act is a mere formality, and the person has no urgent medical issue. However, at times – perhaps due to injuries sustained during the arrest itself – we must perform lifesaving interventions on patients before they can be jailed.

In my role as an emergency physician, I have performed hundreds of these medical clearance exams. In doing so, I’ve helped to save lives, but I’m also providing a service that is vital to the US carceral system.

Structural racism and well-documented abuses are impossible to ignore. Racial disparities are pervasive throughout the system: African-American and Hispanic adults are 5.9 and 3.1 times more likely to be incarcerated, respectively, than white adults. Flagrant use of solitary confinement, the death penalty, prosecuting juveniles as adults, and excessive prison terms continue – all practices that have been deemed inhumane by most liberal democracies.

I remember a case where a jailed patient was brought to the emergency room after an assault. He was floridly psychotic and had been beaten – likely by other inmates. His injuries were not life-threatening and there was no medical reason to keep him in the hospital, so I medically cleared him to go back to jail.

But what did my actions accomplish? This man’s mental illness would have made it impossible for him to navigate life in jail, where simply making eye contact might be perceived as an act of aggression.

Medically clearing this person, and sending him back to that environment, was a shameful act of complicity. Continuing to perform these medical clearance exams would be a moral failure that demonstrates complicity with an unjust system.

I now believe that we – emergency physicians in the US – should refuse to “medically clear” arrested individuals on moral grounds.

There are potentially serious ramifications. These medical clearances often result in lifesaving care; if physicians were to take a stand and refuse to cooperate with law enforcement on moral grounds, then, like our doctor counterparts in Myanmar, we will have to come to terms with the possibility that individual patients might suffer.

It’s not only healthcare workers who must navigate such moral dilemmas. The humanitarian world is full of ethical questions and shifting red lines.

In Myanmar, for example, many local aid workers have questioned their roles in the humanitarian system since the coup. And civil society groups have urged international aid agencies – who commonly preach humanitarian neutrality – not to engage with the junta at all. As grave rights abuses escalate in Myanmar, these dilemmas will only become more pointed.

I admire the courage of the doctors and citizens of Myanmar, who have reflected on their roles in society and decided to take action. Those of us fortunate enough to be watching Myanmar’s crisis from a position of comfort should also ask difficult questions of ourselves.

For me, the role that emergency physicians are expected to play in the US carceral system has become untenable. I hope a comparatively small act – refusing to perform medical clearances – may push others to reflect on their own ethical dilemmas, in the way the people of Myanmar have inspired me.