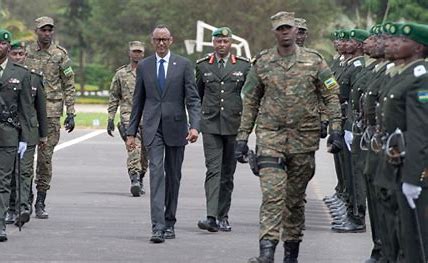 The seeming rapid deterioration of security in the eastern DRC and resurgence of M23 are an outcome of longstanding regional rivalries between Rwanda and Uganda.

The precipitous escalation of the security crisis in the eastern Democratic Republic of the Congo (DRC) risks reigniting interstate conflict in the Great Lakes region. The myriad actors and interests involved, however, often defy easy analysis.

To help clarify what is driving the worsening security situation, the Africa Center for Strategic Studies compiled this explainer drawing on the insights of multiple experts including an understanding of when the current crisis began.

The current crisis erupted in November 2021, when the largely defunct March 23 Movement (M23) militant group carried out lightning strikes on military positions of the Armed Forces of the Democratic Republic of the Congo (FARDC) in the villages of Chanzu and Runyonyi in North Kivu Province, just west of the Ugandan and Rwandan borders. This occurred the same month that Ugandan forces were deployed to the province to pursue the Allied Democratic Forces (ADF), a Ugandan rebel group that also operates in North Kivu and Ituri.

In October and November 2021, Uganda had been a target of suicide bomb attacks that President Yoweri Museveni blamed on the ADF.

By March 2022, M23 had seized key parts of Rutshuru territory, bordering Uganda and Rwanda. In May, they overran the Rumangabo military base, FARDC’s largest military installation in North Kivu. They then pushed south toward the provincial capital, Goma, and across Rwanda’s border city of Gisenyi. In June, another M23 prong operating farther north overran the border city of Bunagana, forcing Congolese soldiers to flee to Uganda.

All this has come as a surprise given the 10-year lull in M23 activities. Between March and November 2013, M23 suffered numerous defeats at the hands of the Congolese military, the United Nations Organization Stabilization Mission in the Democratic Republic of the Congo (MONUSCO), and the Force Intervention Brigade (FIB) consisting of Tanzanian, Malawian, and South African troops.

That March, one cohort of hundreds of fighters fled to Rwanda. Its leader, John Bosco Ntaganda, also known as The Terminator, handed himself over to the US embassy, which transferred him to the International Criminal Court to face war crimes charges.

In November 2013, another cohort of some 1,500 M23 fighters – the remainder of the rebel group – surrendered to the Ugandan military after their strongholds were overrun by UN and FARDC forces. A month later, some 1,374 were dispatched to Uganda’s Bihanga Military Training School for demobilisation.

By 2017, however, only some 390 were still at Bihanga. There was no official explanation as to why or to where the majority of the ex-combatants had gone.

The DRC has blamed Rwanda for reorganising and arming the latest insurgency. The UN Security Council’s Group of Experts on the DRC has previously implicated Rwanda of backing M23. Originally part of the Congolese military, M23 is dominated by Congolese Tutsis. It claims it wants to protect Tutsis against militant Hutu groups, including the Democratic Forces for the Liberation of Rwanda (FDLR), which counts among its forces elements accused of the 1994 genocide in Rwanda.

Some of M23’s top commanders once served in the Rwanda Patriotic Front (RPF), notes Claude Gatebuke. The RPF leadership – including President Paul Kagame and his former Army Chief of Staff, James Kabarebe – once served in Uganda’s military and were part of the rebellion that brought Yoweri Museveni to power in 1986. They then occupied top positions in Rwanda’s military and government after seizing power there with Uganda’s support in 1994.

When both countries invaded the DRC in 1996 to remove Mobutu Sese Seko and install Laurent Kabila, a similar pattern transpired with James Kabarebe becoming Chief of Staff of the DRC’s military. However, when Kabila fell out with Uganda and Rwanda, the two countries sponsored another rebellion in the DRC. Over time Uganda and Rwanda fell out and started supporting proxy forces against each other.

This history of recycling officers among Rwanda, Uganda, and the DRC – and the use of proxies – has implications for the current crisis. Kabarebe was identified by the UN in 2012 as the chief mastermind of M23. In addition to Rwanda, the UN has implicated Uganda with aiding M23.

Following the capture of Bunagana in June 2022, the Speaker of the DRC National Assembly and key ally of President Felix Tshisekedi, Christophe Mboso, condemned Uganda and moved a motion to suspend all military and economic agreements between the two countries. While Ugandan security officials have accused Rwanda of supporting the M23 attack in Bunagana to frustrate UPDF operations against the ADF, Rwanda alleges Uganda is using M23 elements to threaten Rwanda.

In response to the rapid deterioration in the eastern DRC, the East African Community decided in June 2022 to deploy a regional force under Kenyan command to restore stability.