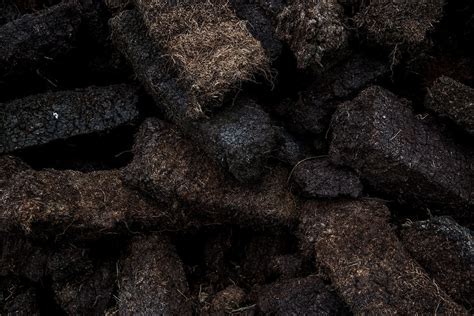 In a huge industrial shed on Leckford Estate, a farm owned by the supermarket Waitrose in a beautiful part of southern England, a revolution is stirring in the world of mushroom growing.

UK production of this crop relies on peat, the incredibly carbon-rich organic matter found in bogs and fens across the country. Peatland contains so much carbon, it is sometimes described as “the UK’s rainforests”.

That is why the UK government has promised to restore 280,000 hectares of peatland in England alone by 2050, to help meet its climate change goals.

So why are we still using peat to grow mushrooms? And what would a lower-carbon alternative look like? Come join me down on the farm.

Why are we using peat to grow mushrooms? Around 60 years ago, UK growers realised that using peat instead of soil to grow mushrooms “massively improved” their yield, says Ralph Noble of horticulture company Microbiotech. Most button mushrooms are grown on a substrate of composted straw and animal manure, but to actually get the bit that we harvest and eat, the cap and stalk that comprise the fruiting body of the mushroom, you need a so-called casing layer on top of the substrate to make those fruiting bodies form.

That is what the peat is used for. It is very good for the task because it holds a lot of water and has the ideal physical and biological properties that lead to fruiting bodies.

Virtually all the mushrooms produced in the UK for consumption are grown this way. Noble says that the UK uses in the region of 100,000 cubic metres of peat a year for this purpose, or roughly a ninth of the peat extracted from UK landscapes annually.

“It’s quite a significant use of peat,” says Noble. Pete Smith at the University of Aberdeen in the UK says the peat used would release around 11,000 tonnes of carbon-dioxide, after making some assumptions about the density of the material. Based on an average family car’s annual emission, he says that means growing mushrooms in the UK is equivalent to the emissions of more than 2600 cars.

“The challenge is finding a material that gives the same [mushroom] yield and quality as peat,” says Noble. His company is leading a consortium including Waitrose working on a £108,000 government-funded research project into peat-free casing materials. A leading contender is coir, a fibre from coconut husks. Other options being examined are powdered bark and composted plant material.

A Dutch research team, led by Jan van der Wolf at Wageningen University and Research, found last year that grass fibres made with a patented process involving agricultural waste could be used.

Van der Wolf and his team were able to grow mushrooms in the grass fibres and the resulting mushrooms looked no different to ones grown in peat. At Leckford Estate, the staff say they have successfully used coir in small tests to create mushroom spores, and this week they are in the process of putting it down across a whole bed to produce greater numbers of mushrooms.

They say the big question that remains is yield, and whether swapping peat for coir would mean they can grow fewer mushrooms in the same shed. Noble is tight-lipped on the official results of the project, funded by Innovate UK, the country’s government-backed innovation agency, as he says they won’t be published until next year at the earliest.

The National Trust, a UK heritage and conservation charity, says that as part of its efforts to phase out peat, it has been searching for a supplier that can provide closed-cup mushrooms grown without peat. But so far it hasn’t found one that can do so at the scale required. In the meantime, the trust says it has decided to reduce the use of mushrooms at its 280 cafes.

Scale is going to be an issue, judging from the National Trust’s experience. “It has to be something in abundance,” says Noble, and it is unclear whether there is enough coconut husks to fill that peat-shaped hole. The Leckford Estate staff, for their part, do think there is enough coir to go round. Another big issue is water retention: peat is very good at holding water, and plant-based compost and coir won’t hold as much.

Mushrooms are about 95 per cent water, says Noble, and most of that moisture comes from the casing material. Another stumbling block is that peat doesn’t vary very much, so alternatives will need to mimic that uniformity to keep mushroom yields up.

The staff at Leckford Estate don’t think so: their search for peat-free mushroom production is part of a far wider commitment to shift the farm’s methods to limit its environmental impact. Moreover, regulation is coming. The UK government recently consulted on the idea of phasing out peat use in commercial horticulture by 2028, which would put an end date on how mushrooms are grown today, if adopted. That is still a big if until a final government decision. One fear Noble has is that mushroom production simply gets shifted to other countries that are less worried about the environmental impact, which is why developing alternatives is vital.

“Using peat in general as a horticulture growing medium probably isn’t sustainable. There’s a lot of pressure on peat bogs,” he says. Smith salutes those researching peat-free alternatives. “Peatland is too precious to use for horticulture,” he says.

Tuesday saw work begin in Iceland on what should be the world’s biggest “direct air capture” facility for removing carbon dioxide from the air. The project, named Mammoth, is expected to take up to two years to build and should remove 36,000 tonnes of carbon-dioxide per year.