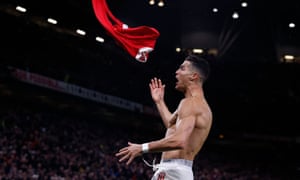 Cristiano Ronaldo did it again in the Champions League scoring a late winner for Manchester United in their 2-1 victory over Villarreal at Old Trafford.

It had been a largely poor evening for the Red Devils with Alex Telles’ stunning strike cancelling out Paco Alcacer’s opener. United were far from at their best, but Ronaldo popped up right when Ole Gunnar Solskjaer needed him with a 95th minute winner.

It was all Villarreal early on as former Bournemouth player Arnaut Danjuma was a pest during the opening 20 minutes at Old Trafford, with Diogo Dalot enduring a particularly torrid time. The Villarreal winger forced David De Gea into two early saves – the second only particularly impressive – before sending over a cross for Alcacer to get away a close-range header that needed quick reactions from United’s number one.

United were fortunate to go into the break with the match still goalless and TalkSports’s Manchester reporter Micky Gray was less than impressed with what he saw saying they were ‘all over the place’.

Danjuma continued to prove a nuisance and Alcacer struck wide after a Raphael Varane mistake, with Yeremi Pino forcing De Gea into a save just before the break.

Villarreal took a deserved lead at Old Trafford in the 53rd minute. Unsurprisingly the visitors got joy down United’s right-hand side, with Danjuma crossing for Alcacer to turn home from close range.

Fernandes flashed a 20-yard effort across the face of goal as United looked to level, which they managed in the 60th minute. Fernandes clipped a free-kick from the right up to the edge of the box, where Telles met the ball with a sensational volley.

Yet, just as the match looked set to end level, Ronaldo struck in the fifth and final minute of stoppage time, meeting a smart Jesse Lingard touch with an unerring finish from an acute angle.

It was a box office finish for the superstar on a historic night where he made his 178th Champions League appearance – a new record.