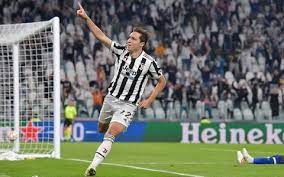 Chelsea have suffered their first Champions League defeat of the season at the hands of Italian giants Juventus, with a fine Federico Chiesa strike just 10 seconds into the second half enough to give the Old Lady a 1-0 win in Turin.

After a narrow 1-0 victory over Russian side Zenit Saint Petersburg on match day one, Chelsea were hopeful of continuing their unbeaten start to their European campaign at the Allianz Stadium, but struggled to break down a well-drilled side despite having much more of the ball than their opposition.

The Blues were without key midfielders N’Golo Kante and Mason Mount for the trip to Italy, who missed the clash through Covid-19 and injury respectively, with Kai Havertz and Hakim Ziyech added to the team that lost 1-0 to Manchester City in the Premier League on Saturday.

All eyes were on Chelsea’s star striker Romelu Lukaku, but the Belgian forward struggled to get into the game during the first half against Juve’s centre-back pairing of Matthijs de Ligt and Leonardo Bonucci.

After an even, but uneventful first 45 minutes, Chelsea boss Thomas Tuchel decided to bring on English left-back Ben Chilwell in place of Marcos Alonso for the second half to add a different dimension to the team.

But Chilwell was on the pitch for all of 10 seconds when Italy international Chiesa linked up with Federico Bernardeschi, before finishing emphatically into the roof of Edouard Mendy’s net to give Juve the lead.

Bernardeschi could have put Juve two up shortly after, but the 27-year-old midfielder fired over from a position that looked easier to score than miss.

Chelsea made a whole host of second-half changes with Callum Hudson-Odoi, Ross Barkley, Trevoh Chalobah and Ruben Loftus-Cheek among the players brought on in order to try and find the equaliser.

The Blue’s best chance of the game came 10 minutes from time when Barkley’s neat pass put Lukaku through on goal, but the 28-year-old fired over when under pressure from Bonucci.

There was enough time for one final Chelsea chance during injury time, but Havertz’s header fell agonisingly over Wojciech Szczesny’s goal. The result leaves Chelsea second in the Group H table, three points behind Juventus after two matches.

The west London club, who went seven games unbeaten at the start of the season, have now had back-to back defeats in all competitions. They’ll be hoping to bounce back when they host Southampton at Stamford Bridge on Saturday.